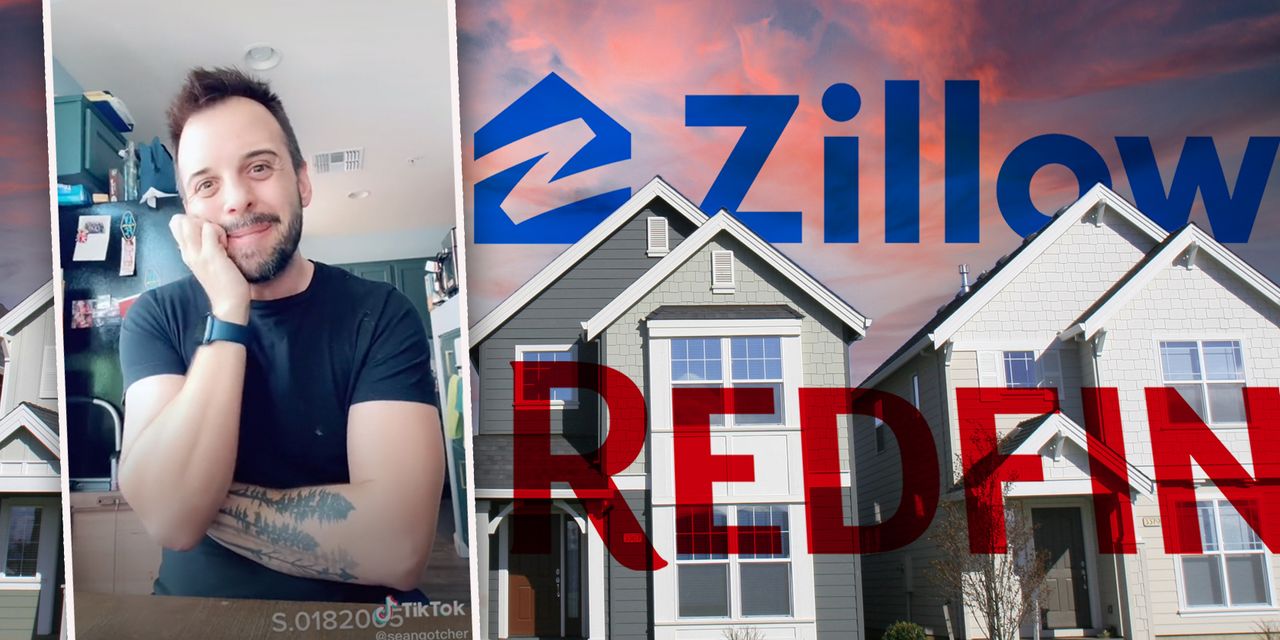 manipulating home prices by purchasing properties across the country? That’s what one real-estate agent claims in a video that went viral on the social-media platform TikTok — but real-estate experts say the reality is much more complicated.

In a video that’s garnered more than 2.4 million views on TikTok, Nevada real-estate agent Sean Gotcher criticizes the “iBuying” business model, in which companies buy and sell homes for a profit. In the video, he proposes that a nameless company has a website where many people search for homes “when they’re bored,” and he says that same company “uses that information to go into that ZIP code and start purchasing houses.”

In other words, he’s suggesting that companies such as Zillow are using the data they glean from people’s perusal of home listings on their sites to make decisions about which houses to buy as iBuyers.

Gotcher later argues that the company will buy 30 homes at one price, and then purchase a 31st home at a higher price. “What that just did is create a new comp,” Gotcher says, referring to comparable prices on nearby properties, which appraisers use to determine the value of a home for sale. He then says the company can turn around and sell the other homes at that new, higher price.

“I’m happy to see the conversation that’s occurring at every printer in every real estate office about data storage, mixed with buying power and recognizable marketing is finally happening outside our office doors so more can participate in the discussion,” Gotcher, who works for Level Up Real Estate in Henderson, Nev., told MarketWatch in an email.

The video subsequently garnered even more attention on Twitter
TWTR,
,
when a person with the username Gladvillain shared it after learning that the user’s mother had sold her home to Zillow. Many users claimed that Zillow was purchasing “all of the homes,” and said they planned to boycott the platform.

Both Zillow and Redfin contradicted the video’s claims. “The internet has empowered millions of consumers with more information, transparency and tools in real estate to help them make smarter real estate decisions, many provided by Zillow for more than a decade,” a Zillow spokesperson told MarketWatch in an email. “Unfortunately, the internet can also sometimes be a source of misinformation and falsehoods — as is this case.”

“‘Intentionally overpaying for homes would be a terrible business model.’”

A Redfin spokesperson added that the company doesn’t “have the share to manipulate the market nor do we have any desire to, because intentionally overpaying for homes would be a terrible business model.”

Real-estate experts debunked many of the points made in the viral video, and argued that other forces are to blame for the country’s competitive, pricey housing market.

“If you could rig the residential housing market that easily, the Realtors would have done it long ago,” said Gilles Duranton, a real-estate professor at the University of Pennsylvania’s Wharton School.

Here’s what people need to know about so-called iBuyers, today’s competitive housing market and the future of real-estate technology:

How the iBuying model works

Over the past decade, multiple companies have entered the so-called iBuyer business. Among the biggest players are Zillow, Redfin, Opendoor
OPEN,

and Offerpad
OPAD,
.
(Opendoor and Offerpad did not respond to requests for comment.)

The basic concept is this: The companies use data to make a direct offer to a seller for their home. IBuyers argue that the transaction is a no-fuss, no-muss way for sellers to offload a property without involving middlemen such as real-estate agents; however, sellers do have to pay fees to the iBuyer. The iBuyer then might do some light renovation of the home but will generally turn around and quickly put it in the market.

The companies themselves are open about this approach. “We’re honest with sellers that they’ll likely net more by listing on the market with an agent,” the Redfin spokesperson said.

“Companies like Zillow and Opendoor typically buy homes at a slight discount relative to the market value, and then sell them for a small premium.”

There’s one key reason sellers opt to go this route, even if it means getting a lower price than they would find on the open market. “Households are doing this because of the speed advantage,” Piskorski said.

For instance, if a homeowner in New York suddenly got a job in California, he or she would theoretically have a much easier experience selling directly to one of these real-estate companies rather than listing with an agent. “The iBuyer will help you by essentially buying your house in five days,” as opposed to two to three months, Piskorski said.

The types of houses iBuyers prefer

These companies aren’t interested in buying just any home. For example, only 3{49352ce17ba8b8c977b46090d4022735cbbf9c8d2a96e7181f87be9b36a1fd69} of properties that were in foreclosure or bank-owned on Auction.com were purchased by iBuyers between January and May of this year, according to Daren Blomquist, Auction.com’s vice president of market economics.

Blomquist’s analysis also found that iBuyers target newer homes than other cash buyers. But these companies aren’t buying megamansions either. They focus very much on the middle of the market, where there’s more liquidity, Piskorski said.

“‘iBuyers certainly don’t have enough market share to wield the type of pricing power that the video describes.’”

And no, they’re not aiming to increase prices too much. “Doing this would be short-sighted. If house prices keep rising like crazy, they will eventually crash,” Duranton said, adding that companies such as Opendoor are taking a long-term approach to the model.

Even if these companies wanted to manipulate home prices, they wouldn’t find they had a great deal of capacity to do so. A recent report from Zillow found that the four largest iBuyers — Zillow Offers, RedfinNow, Offerpad and Opendoor — accounted for just 1{49352ce17ba8b8c977b46090d4022735cbbf9c8d2a96e7181f87be9b36a1fd69} of all home purchases nationwide. And that was a record high.

“IBuyers certainly don’t have enough market share to wield the type of pricing power that the video describes,” Blomquist said. “Certainly there are higher concentrations in some areas, but it’s hard to imagine a real-life scenario like the one described in the video — and I haven’t seen that in the data.”

Why are home prices on the rise?

The fact that the video struck such a nerve likely speaks to the anxiety many Americans feel because of the rising cost to rent or buy a home.

But the cause of the housing-affordability crisis is much larger than the business dealings of companies like Zillow. Simply stated, the country has a major housing shortage. A recent report from Realtor.com estimates the deficit to be more than 5.2 million homes. (Realtor.com and MarketWatch publisher Dow Jones are News Corp
NWSA,

The 2008 financial meltdown is largely to blame. In the wake of the subprime-mortgage crisis, home builders significantly scaled back their operations. At that time, many had been engaging in speculative building, creating entire neighborhoods of homes before any single property was sold. So when the housing market crashed, suddenly there were millions of vacant homes nationwide.

“The nation is facing a shortage of some 5.2 million homes, according to a recent Realtor.com report”

It took many years for builders to begin scaling their operations back up, and in the meantime people were still getting married and having kids or otherwise reaching the home-purchase life stage. Then came the COVID-19 pandemic, which prompted many people either to rethink their housing completely or to push forward the clock on a move they had planned for the future. So with many people suddenly flocking to purchase homes, there wasn’t much to go around, creating competition that drove prices sky high.

Home builders have responded to the uptick in demand but have faced shortages of building materials and labor that are slowing the pace of construction.

Amid all this, cash buyers, including iBuyers, have likely played a role in pushing prices even higher. The percentage of all-cash buyers in the market now is at the highest level since 2013, Blomquist said. “Cash buyers are having to pay a premium above estimated market value to be the first in line to secure the limited inventory available,” Blomquist said.

“This speculative behavior is contributing to the rapid price appreciation, but it wouldn’t be possible without the severe supply-demand imbalance in the housing market,” he added.

The arms race to become the Amazon of real-estate

While iBuyers haven’t yet achieved the necessary scale to influence the market in a profound way, it’s not impossible to imagine such a scenario in the future.

“There is an arms race right now of who will become the Amazon of real estate,” Piskorski said. “That’s why all these companies like Zillow or Redfin want to have everything in house.”

Indeed, iBuying is part of a broader trend of tech-based companies seeking to streamline and upend the traditional home-buying process. Aside from launching these home-buying divisions, Zillow and Redfin have also sought to create mortgage-lending and title and escrow businesses. They’re not alone, either, as the home-finance-services company Rocket
RKT,

and others have sought to diversify in similar ways.

If any of these companies were to succeed and attract large enough market share, then they would also face the sort of scrutiny that tech giants like Amazon do. Not just out of concern for consumer choice and the negative impact a monopoly in real estate might have, but also because of the implications for financial stability. Many of these companies have had to borrow to finance their home-buying operations — which could pose broader risk were there to be a market meltdown.

Whether any of these companies can successfully scale up their business models in the long term isn’t yet clear. “The business model has not been tested really in a recession,” Piskorski said. Last year, iBuyers did temporarily shut down operations at the very beginning of the pandemic, but they came back on line as the real-estate market quickly rebounded.

“For consumer-finance reasons, there will be a lot of scrutiny,” Piskorski said.