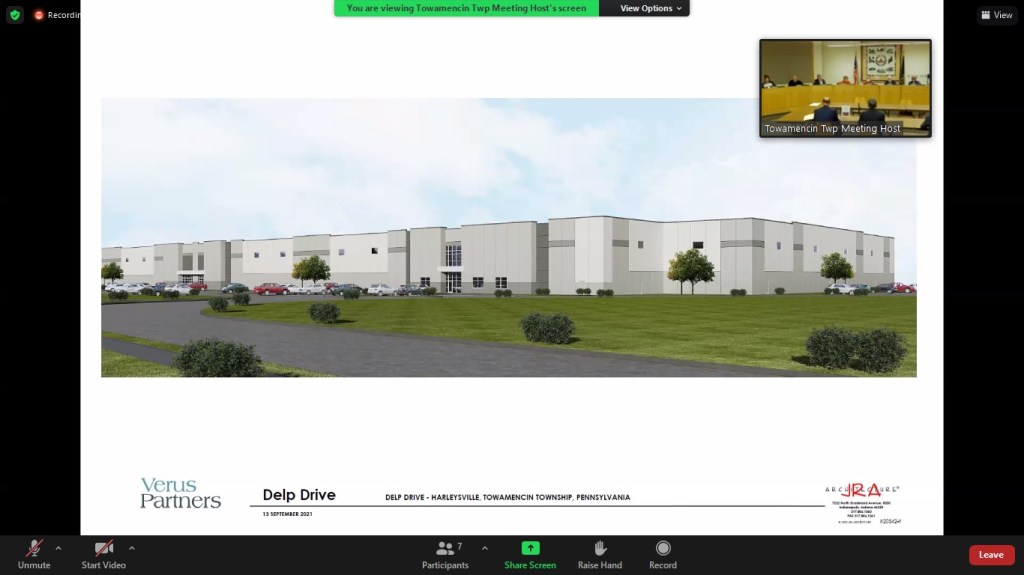 TOWAMENCIN — A plan in the works for a large warehouse has caught the eye of a community in Towamencin.

The township’s supervisors saw plans for, and fielded feedback on, a roughly 268,000-square-foot warehouse off of Delp Road.

“I think you’ve heard some of our concerns, and if you could work with staff to try to take those into consideration before you come out again, that would be great,” said supervisors Chairman Chuck Wilson.

Developer Verus Partners is proposing to combine a total of eight parcels into one 30.44-acre lot just north of what is currently a dead-end on Delp Drive, just west of Spring Lane adjacent to the existing Dock Woods community. Attorney Greg Davis, engineer Bernard Teletovich and a team of consultants outlined those plans to the supervisors, in a roughly two-hour conditional use hearing and discussion on their land development plans.

“We first submitted preliminary and final land development plans over a year ago, and we’ve been through four review cycles now with township staff and consultants,” said Davis.

The township’s zoning hearing board has granted a special exception for a stream crossing related to the project last October, and voted ahead the land development plans last November, leading the team to the supervisors for feedback ahead of several additional approvals. Township codes prevent disturbance of any steep slope with a grade of greater than 15 percent, Davis told the board, and he and Teletovich showed a site plan outlining the shape of the planned warehouse above those steep slope areas, highlighted in blue and largely concentrated around a driveway leading from Delp into the building. The proposed warehouse would be rectangular in shape with the lengthy side roughly 850 feet long and running north-south, with the shorter side roughly 260 feet, with a driveway surrounding the building, parking spaces on three of the four sides, and truck loading docks on the east side closest to the adjacent Dock community off of Spring Lane.

The steep slope disturbed area covered by the project totals roughly 1,150 square feet, which totals only a small fraction of the total property.

“That’s roughly the size, on a site this size, that’s about six parking spaces,” Davis said.

The bigger issue is the orientation of the building.  Engineer Paul Susak told the board that, while the warehouse use is allowed by-right in the township’s limited industrial zoning area, the planned building currently has no identified tenants, and the design is meant to allow flexibility with auto parking on the west side and truck loading on the east.

“They could load from the back, with the dock doors. They could have multiple tenants, it could be warehouse, or manufacturing, or a combination thereof, with the potential of having office space in the front as well,” he said.

“On the west side, we have a rather large PECO easement, and then another stream, and on the east side we have a residential subdivision. So we really have no way in and out of this, other than the one way which is Delp Drive,” Susak said.

Because of the single access point from Delp at the south side of the property, and the slopes and streams surrounding the property, the design places the trucks on the east side to accommodate traffic stacking there instead of on the public street, to keep loading and unloading trucks separate from the cars parked on the opposite side, and to put the building 10 to 15 feet lower than the surrounding properties.

“We’ve taken a lot of measures to add landscaping, and fencing, and berming along the back to protect us from the trucks,” Susak said, showing a series of elevation plans with berms and plantings between the warehouse and the neighbors: “We think we’ve done everything we can to protect them, but there is a real reason why you lay them out this way.”

Board Chairman Chuck Wilson then asked about emergency access to the site, prompting a lengthy discussion about whether the development could use just a single point of entry off of Delp Road.

“You need to have emergency access, or the road would have to be widened all the way out, so that multiple vehicles could get past in the event there’s some kind of crash on that road,” Wilson said.

Another topic of concern for the board: the level of noise created by trucks backing into the loading docks on the east side of the property, and how loud they would be for the residents on nearby Spring Lane.

Ed Brubaker, CEO of Living Branches which operates the Dock community, told the board that “it’s probably of no surprise that the orientation of this building is our biggest concern,” and said half-a-dozen residents of the community were attending to voice the same concern, and an engineer hired by the community to vet the proposed plan said the same.

“The orientation of the building, and trucks next to residences, were his biggest concern. He felt it could be reoriented. I’m not the expert to speak to that, but that’s what he was feeling,” he said.

Brubaker added that he’s seen a similar warehouse under construction off of Route 309 in Hatfield which has better access, and a similar proposed warehouse by Verus in West Rockhill Township with similar concerns about noise, but in that case the loading docks were on the side of the building opposite the neighbors.

“I guess part of me asks, if it can be done in West Rockhill, why can’t it be done here, to protect the residents?” he said.

Resident Joe Silverman added his own concerns, asking how long the side facing the residents would be; the team said roughly 850 feet, and Silverman said that could mean dozens of loading docks, each with trucks backing in.

“Those backup alarms cannot be disconnected, so it’s ‘Beep, beep, beep’ constantly, however many hours, every day. It could be at night too, worst case,” he said.

Towamencin’s supervisors next meet at 7 p.m. on Feb. 23 at the township administration building, 1090 Troxel Road. For more information visit www.Towamencin.org.