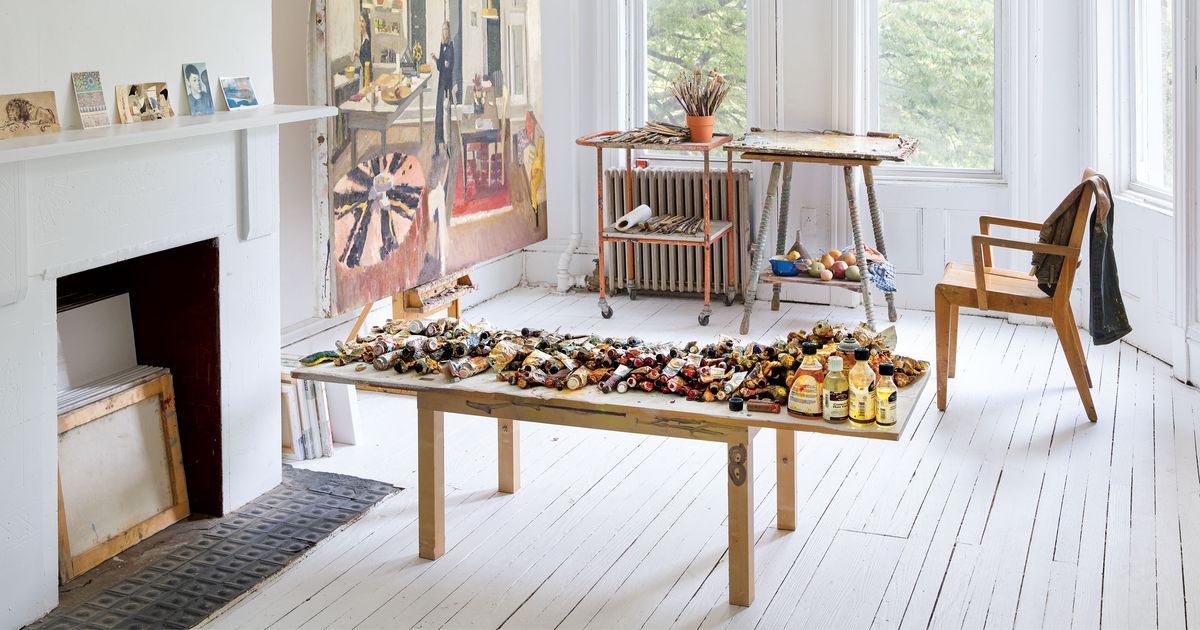 After a decade living in an apartment near his studio in Bushwick, artist Adrian Nivola wanted to buy a house big enough to work in. But it had to be just the right one with northern light and a garden. He had been “visiting enough houses that I felt my real-estate agent began to suspect me of wasting her time,” he says. “She was French, and she seemed to think I was absurd because I didn’t like so many of the houses that I was supposed to fall in love with, and the same was true with neighborhoods.”

In 2019, he finally found this Bedford-Stuyvesant house that had been happily neglected (so many houses he saw had their charm undone by renovation), with light streaming in through the kitchen, a garden out back, and a view of a rose garden in the park across the street. The biggest draw, however, was the dream that one day, “it would offer me the possibility of building a luminous studio on top of the roof from which I would be able to see the canopy of trees in the park below.”

Nivola grew up around artists. His late grandfather, the Sardinia-born sculptor and teacher Costantino Nivola, married Ruth Guggenheim, whom he had met at art school in Italy. They moved to New York in 1939 and bought a 1754 farmhouse in Springs, Long Island, across the street from Saul Steinberg, in 1948. Lee Krasner and Jackson Pollock lived nearby, and family friend Le Corbusier (he and Costantino shared studio space for a while in Greenwich Village) would sometimes visit. The Springs house, still in the family, has the mural that Le Corbusier made for the Nivolas in 1950. It was in Springs that his grandfather developed his innovative technique called “sand casting,” in which he would pour plaster or cement into a mold dug into the sand while at the beach with his daughter, Claire, and son, Pietro, Adrian’s father. Well known in his day, especially for his 1952 sand-cast abstract panels for the Olivetti showroom on Fifth Avenue, he was commissioned to cast 18 miniature horses for the Wise Towers by the New York City Housing Authority in 1964. When they were removed — chopped off at their feet — during a renovation project earlier this year, conservationists were outraged, not to mention Adrian and the family.

Adrian and his brother, Alessandro, an actor, grew up spending lots of time in the Springs house, and they both have a trove of objects Steinberg gave them as gifts when they were little kids. Adrian also helped put together a show of his grandfather’s sculptures this past year at Magazzino Italian Art in the Hudson Valley.

His newly renovated house radiates a similarly relaxed comfort as the Springs house. Some things were borrowed directly: The cadmium-yellow paint of his bathroom floor came from a can he found in the basement of the Springs house “only half-empty and yet miraculously unspoiled.” He also has a cache of original Le Corbusier drawings and watercolors that belonged to his grandfather.

But the most potent works of all are always his grandfather’s: “My grandfather’s sculptures watch over me in the rooms of my house like inscrutable deities, and they keep me on my toes. Even if they weren’t so beautiful, I would never want to live without them.”

His Sculpture and Painting

Over the fireplace is one of a series of invented unplayable instruments from Nivola’s show currently at the Drawing Room in East Hampton. Rachel and My Mother (2019), the painting next to the fireplace, will be part of his upcoming show at Victoria Munroe Fine Art in New York in December.

The door leads to the back garden, as yet untouched. Nivola’s dining table is among the few new pieces of furniture he bought for the house. Framed on the right hand wall is his grandmother Ruth Guggenheim’s artwork. “She worked to crochet what have been called, for lack of a better description, ‘abstract adornments,’ or jewelry, out of fine gold and silver threads.”

Costantino Nivola’s Pastore sits on the table. The drawings on the wall are by Le Corbusier.

It overlooks the garden in the back of the house. Le Corbusier watercolors are on the walls, and the sculpture on the floor is by Adrian. His studio is on the same floor.

Segovia’s Lute (2019) from his series Architecture of the Instrument, currently on view at the Drawing Room.

Three of his Rare Birds pieces, which are also currently on view at the Drawing Room.

“To my surprise, I was able to reuse quite literally the same can of yellow paint my grandfather had purchased in the 1950s” to paint the floor, Nivola says. The limited edition lithograph is by Saul Steinberg.

*This
article appears in the September 27, 2021, issue of New York Magazine.
Thank you for supporting our journalism.
Subscribe Now!

Design editor Wendy Goodman takes you inside the city’s most exciting homes and design studios.


By submitting your email, you agree to our Terms and Privacy Notice and to receive email correspondence from us.