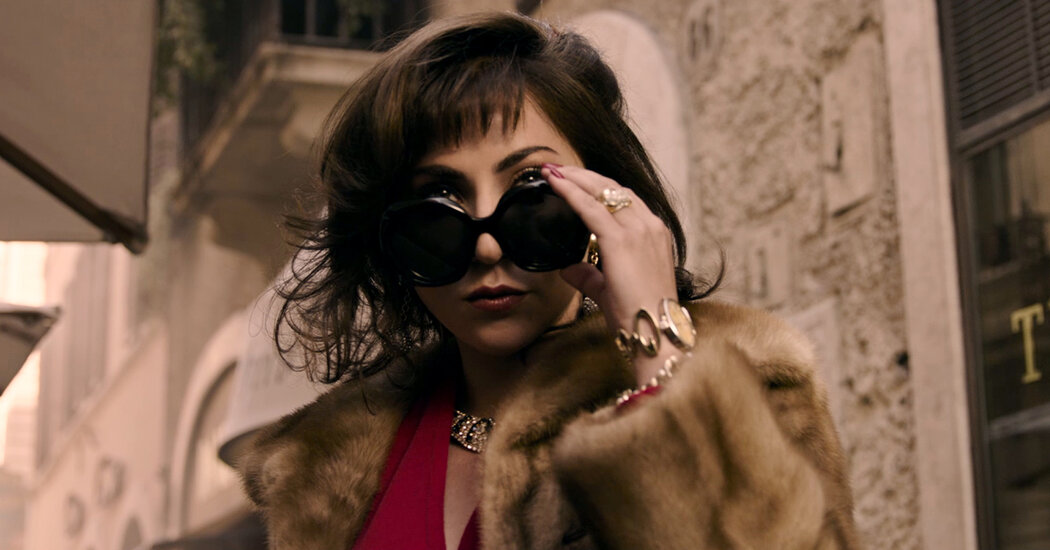 The fractious Gucci family, whose internecine power struggles famously helped it lose the company Guccio Gucci founded in 1921, has finally found common cause once again.

The reason for the family’s reunification: “House of Gucci,” the 24-carat camp drama framed in pigskin about the murder of the family scion Maurizio Gucci. The film, starring Lady Gaga as Patrizia Reggiani, the spurned wife who commissioned the hit, and Adam Driver as Maurizio, opened in the United States last week, bringing 10 members of the dynasty back together to protest what they believe is a distortion of history, the family name and the brand they made.

The descendants of Aldo Gucci, one of the three sons of Guccio, and the man who turned the Florentine leather brand into a global sensation (and who is played in the film by Al Pacino as a sort of rumpled, prosciutto-spewing American cartoon of a Mafioso) issued a statement, reading: “Although the film claims to tell the ‘true story’ of the family, the narrative is anything but accurate, depicting Aldo Gucci — president of the company for 30 years — and other members of the Gucci family who were the protagonists of well-documented events, as hooligans, ignorant and insensitive to the world around them.”

It went on: “Even more censurable is the baffling reconstruction of events that advocate leniency toward a woman who was definitively convicted as the instigator of Maurizio Gucci’s murder. To see her portrayed as a victim — not only in the film but also in statements by the cast — who is trying to survive in a male-dominated corporate culture, is an injustice and could not be further from the truth.”

Public relations representatives for the film said that neither the producers nor Ridley Scott, the director, could be reached to respond to the family’s statement. Lady Gaga has acknowledged that she did not engage with Ms. Reggiani (who has expressed her displeasure about not being consulted), or even read the book on which the film was based, the better to create her character from her own imagination, she has said.

In response to earlier criticisms from Patrizia Gucci (a daughter of Paolo Gucci, played by Jared Leto as a dolt of a designer in a bad corduroy suit) that the filmmakers were exploiting a family tragedy for Hollywood profit, Mr. Scott said on the BBC “Today” show: “I don’t engage with that. You have to remember that one Gucci was murdered and another went to jail for tax evasion, so you can’t be talking to me about making a profit. As soon as you do that, you become part of the public domain.”

The suggestion being: Once you’re in the public domain, your story is not your own. An assumption presumably exacerbated if your ancestors have deliberately transformed your family name into a brand that they then sold to the world. It’s kind of like saying they swapped the family soul for fame and filthy lucre, so tough luck.

It’s also why the family decided to take the fight public. It may seem like a squabble in a green-and-red horse-bit-tinged teacup, but at a time when the distinction between what is fact and what is fiction has become evermore porous, when the concept of so-called alternative facts has became a part of the general discourse, and when viewers tend to believe whatever they see onscreen (big or little), it has resonance that goes beyond the box office.

True or Not True?

Sure, the Guccis are interested in perpetuating the aura of their own taste (even though they no longer have a financial relationship with Gucci the brand, they are deeply attached to the name). But that doesn’t mean their concerns are without merit. As Lady Gaga said in a British Vogue article, “I did my very best to play the truth.” But whose truth?

Not, the Gucci family says, theirs. According to Patricia Gucci, the family began discussing the possibility of a joint statement a month or so ago, after the breathless reaction on social media to early trailers suggested there would be a wholesale embrace of Mr. Scott’s version and after earlier attempts by the family to contact the film’s producers before the movie was even in production were never returned.

Michael Oher was not happy with “The Blind Side,” nor Mark Zuckerberg with “The Social Network.” And there’s an entire industry in complaining about what “The Crown” gets wrong. “Based on a true story” is effectively creative code for “some artistic license involved,” which is itself shorthand for sacrificing fact to dramatic imperative and story arc.

As it happens, “Gucci” takes the caveats a step further, with the opening disclaimer “inspired by a true story,” a signal that the filmmakers may have taken more liberties than usual. (Another signal: All the characters speak English in various versions of fake Italian accents, a much-derided choice that makes no sense.)

Yet the film is not presented as magical realism, nor even overt satire. It is based on the nonfiction book by Sara Gay Forden, “The House of Gucci: A True Story of Murder, Madness, Glamour, and Greed,” and none of the names have been changed, creating an expectation that what the viewer is seeing is at least a plausible re-creation of a historical truth. There has been much discussion of the attention to period detail when it comes to the wardrobes — so ’70s and ’80s fabulous! Even some from the actual Gucci archive itself!

But a cursory and noncomprehensive list of some of the changes the filmmakers made includes: the erasure of three of Aldo’s four children (who were also in the family business); the deletion of Dawn Mello, a key figure in the Gucci renaissance under Maurizio and his outside partner, Investcorp (and a female power player); the collapsing of various outside lawyers and bankers into the single figure of Domenico De Sole, who has been turned into a Tom Hagen figure à la “The Godfather” who not only does professional dirty work but also personal; and the fast-forwarding of Tom Ford’s breakthrough collection to associate it with Maurizio’s leadership (not true; nor did it involve men or Gucci G-strings — those came years later).

Such reduction can often be excused in the name of art and story streamlining: plot details that matter only to insiders. And the actual Gucci saga, with its competing boardroom power plays, was convoluted at the best of times. At a time of limited attention spans, you can understand why it seemed better left on the cutting room floor.

Except that there is also another element that has also been elided in the film: the reason any of it mattered in the first place.

For that you have to go back to the myth of elegance, craft and a bit of flash encapsulated by the word “Gucci” that made the products — the shoes and bags and clothes — desirable as markers of both aspiration and achievement. And that was created largely by the exact characters the film turns into caricatures, embracing the showy trappings of success — furs! Ferraris! — to gussy up a rotten core. They may be entertaining to watch (Jared Leto and Lady Gaga may even get Oscar nominations out of it), but as tastemakers they are impossible to believe.

By most accounts, Aldo and even Paolo, not simply Maurizio and Rodolfo, were magnetic figures whose carriage reflected the soignée substance of what they were selling — and, indeed, helped sell it.

In a recent review of the film for Air Mail, Tom Ford, who had a front-row seat to the whole story (though not the precise one depicted in the film), wrote: “In real life, none of it was camp. It was at times absurd, but ultimately it was tragic.” The lack of nuance in the movie made him, he wrote, “deeply sad.” In a phone call, Domenico De Sole said much the same.

In their statement the family said it reserves the right to “protect its name, image, and dignity,” which sounds like yet another Gucci case might be the offing. But Patricia Gucci (who is currently embroiled in a different lawsuit, in which one of her daughters is suing her ex-husband for childhood sexual abuse, and she is named as a co-defendant) said there are no such plans; they are leaving it to the court of public opinion for now.

Will it make a difference? It’s easy to dismiss the complaints as the whining of sore losers who are obsessed with image over all. But it’s exactly that image that formed a totem of identity that is part of the story of how we got to here: how so-called craft became a value unto itself and fashion vaulted from being a bunch of small family-run businesses into a global part of pop culture.

And that in turn is part of what made the movie itself worth making, because that’s why a corporate and family crisis exploded into closets around the world. It’s part of why, since the film’s release, searches for Gucci products have gone into the stratosphere; according to the global fashion marketplace lovethesales.com, up 257 percent for Gucci bags alone.

To miss that seems not so much like creating art and more like fake news. And in that case, no one really wins.