Renovation turns one house into three 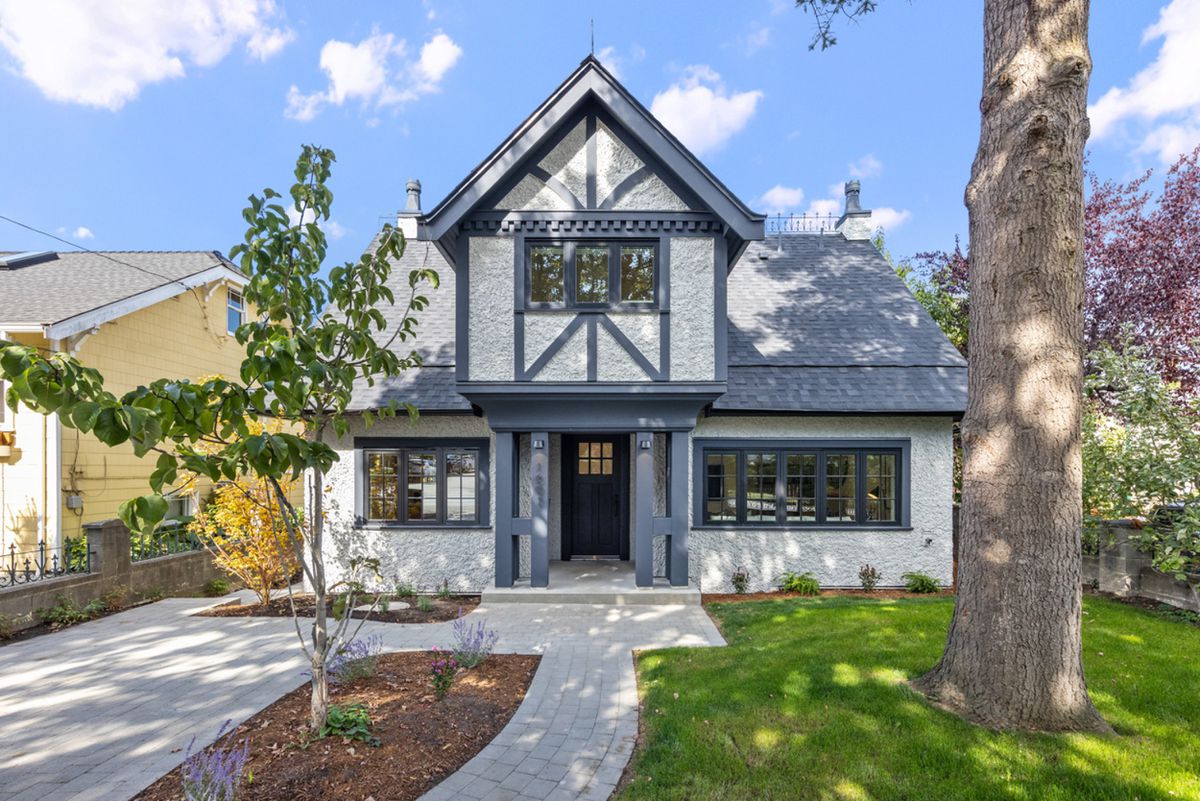 Vancouver realtor Josh Mulherin has spent the past year and a half overseeing his first small development in the east side neighbourhood of Cedar Cottage, where he and members of his construction industry family converted a character house into three units.

Mr. Mulherin worked for a national construction company for 12 years and has worked the past five years as a realtor. He and his father-in-law and other family members had been looking for a project and chose a large property at 1697 E. 22nd Ave., at the corner of Welwyn Street, in a zone that allows extra density in exchange for retention of the general form of the original character house. The totally renovated 1928 character house with newly restored chunky rock-dash stucco siding and a Tudor style façade is across from Lord Selkirk Elementary School and near the growing Commercial Street retail district.

Where previously a single-family house once stood, there are now two contemporary duplex units. To the rear, a stylish infill house has replaced a somewhat overgrown garden. It is an example of “missing middle” density – that sweet spot between the detached house and the condo tower.

A previous group of investors had owned the 5,700-square-foot property for two years and taken it through the development permit process, but they decided to back out for reasons that aren’t known. Mr. Mulherin and his family purchased the property in March, 2020, for $1.93-million. Architect Innes Yates designed the interiors for the two duplex units in the original house, which includes an addition, and the new infill house to the north of the property, facing Welwyn. The result is three three-bedroom, three-bathroom contemporary units over a total floor space of 4,180 square feet. The infill house, which is 1,580 square feet, has an interior garage and is listed for $1.9-million. The duplex units are listed at just under $1.5-million and $1.6-million. The project is selling for about $1,200 a square foot.

Other than a restored exterior, the house has been completely rebuilt, stripped to the studs and moved three feet forward on the lot. It has the rare benefit of a mature garden with old trees that Mr. Mulherin paid a significant sum to retain, using pilings to stabilize the house so that the tree roots wouldn’t be affected. The interior has vaulted ceilings at odd angles, custom-built storage units and blonde oak throughout, with picture windows, floor-to-ceiling sliders and skylight wells that capture the surrounding garden. It benefits from its corner lot placement, as well as a neighbour’s lush garden oasis that serves as a backdrop.

The project went about six months over schedule and about 15 per cent over budget. There were surprises, such as the $95,000 in fees to run utilities underground. And there was the spike in lumber costs during the pandemic. But market demand is strong enough that they plan to do more of these small, missing middle projects.

“We were framing when lumber doubled, but the way we looked at it was … with construction costs going up, the sale values also went up, and the overall sale values in theory will be higher than the extra building expenses we incurred when building,” says Mr. Mulherin, while giving a tour of the site.

A character house retention project is often more complicated than building a new house. There are hoops to jump through.

“We kept everything that we were supposed to. They [the City] read us the riot act and said, ‘You need to keep as much of the original framing as possible, while keeping it to code and structurally sound. But don’t go ahead and rip it apart. That would be too easy.’”

Mr. Yates, the architect, is a supporter of missing middle projects, but he believes the City needs to go much further than what they were allowed to do with the E. 22nd property. He’d like to see new building forms on standard-size lots.

“This whole missing middle issue is something that I’m really focused on,” Mr. Yates said. “A lot of smaller firms are now doing these types of projects. There are a lot of great ideas, there is a lot of creativity, and there’s a lot of serious thinking that’s been put into how to do this. So this is sort of a step in that direction but I think we need even more density than that.

“The city is trying to add density but maintain the feel of a single-family neighbourhood, which is impossible. At a certain point, you have to leave that behind and come up with this missing middle thing, which all of us are convinced will work.”

He acknowledges, however, that to double the density on the E. 22nd site they’d have had to remove the character house and develop entirely new buildings. But if the City allowed five or six units on sites where the house has no historical relevance, such as an old rundown bungalow, he could design multi-family units that fit with the scale of the neighbourhood. This sort of housing mix is nothing new, Mr. Yates said. It was a popular building form in the 1950s and 1960s, and many small multi-unit buildings are still standing among detached houses.

“I’m completely convinced that … we can do schemes in residential zoned neighbourhoods that are going to be successful, that people will love, and that neighbours won’t get upset about. The missing middle, it’s quite tricky, because you are dealing with residential zoning, and the city generally prefers to build condo towers, but that’s not the solution for everyone.”

And there’s the question of affordability, which won’t be achieved by merely adding new supply, he said. The E. 22nd site may have added an extra two units of housing than it originally had on the property, but they aren’t affordable to the average income earner because the cost of land and development is so high.

“It’s market housing, and I hope that young families move in or whatever, and it’s not some kind of investment vehicle for people. But it is definitely not affordable housing,” Mr. Yates said.

He believes that in order to bring down prices and make housing more affordable, including rental housing, the government has to get involved in helping the people who are displaced by redevelopment of old housing stock.

“There isn’t a market solution for that,” he said. “It has to be a government solution. I don’t think there’s any other option at this point. And the government is just so reluctant to get involved in housing. They are still sticking to their market fundamentalism that the market will provide all the solutions. And we clearly know that’s not the case.

“Any time the City does something that would affect somebody’s property value there’s a backlash. And owners of property see the City or the authority almost as their portfolio manager. They are responsible for keeping the value of their home high, and keep it growing so they can financially benefit from that.

Your house is your most valuable asset. We have a weekly Real Estate newsletter to help you stay on top of news on the housing market, mortgages, the latest closings and more. Sign up today.