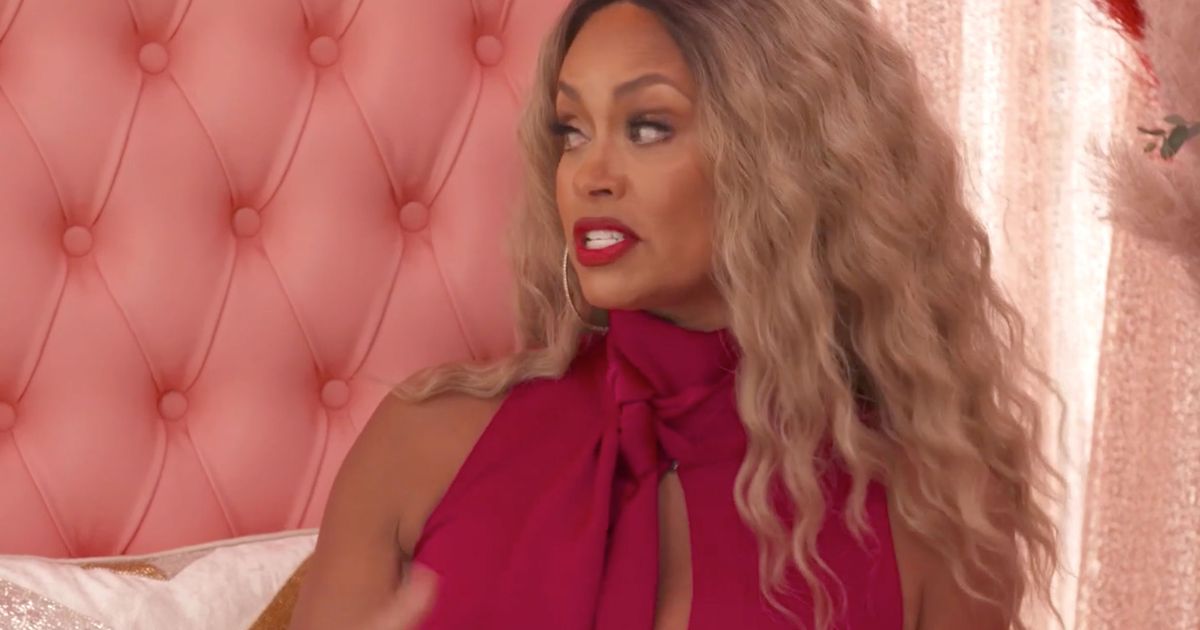 We have been in this pandemic for approximately a year and a half — that is a year longer than the time it took to grow out the cursed “layers” I attempt to DIY on my hair, six months longer than it took to trim out all of my heat damaged curls, and four months since the New York Knicks made their first NBA postseason appearance since 2013. I think it’s safe to say that we’ve all been through a fair number of hills and valleys and, for the most part, are just trying to keep our heads straight from one Zoom call to the next.

This must be the only reason I can fathom why Dorothy “Dot” Dillard (is this her last name? let’s go with it for now) is on our screens in 4K sporting a crochet installation with a part that’s wider than the Potomac River. Listen, the panorama led to a lot of us Black girls becoming faithful students of the YouTube university of skin and hair care; I have the bags of Kanekalon in my closet as proof of my semesters of study. For the life of me, however, I cannot wrap my head around the fact Mama Dot hopped up out the bed, turned her swag on, took a look in the mirror, saw those tracks, and didn’t think she needed to make any adjustments before being a featured guest in her daughter’s music video.

Reality, however, doesn’t seem to be the plane that Dot likes to operate in. After all is said and done with the music video, the Bassett family takes themselves from the parking lot back to their Potomac house so that Chris can take off his apron and Candiace can debrief with Dot. She speaks with her daughter about the ongoing gossip in the background, doing a worse job than Lisa Rinna on RHOBH at feigning memory loss in a situation that she completely instigated. It’s quite a nasty tactic she’s employing here; instead of just plainly saying her apparent issues with Chris (unless editing left that on the chopping block), she is using people that she knows Candiace has issues with or wouldn’t dare go toe-to-toe with as proxies instead, implying that their existing concerns are valid. The only ones who chose to remove themselves from the fray were Karen, Wendy, and Askale; the rest completely took the bait for various reasons. It’s the ultimate form of passive aggression — and I know Candiace has already revealed that it hurt her and Chris to see that on WWHL — but it allows her to dig her heels in and deflect blame onto people that she already has simmering tensions with instead of addressing the gargantuan red flag that she keeps ignoring. “Our contract is our marriage certificate and prenuptial agreement” is what so many other couples have said before things got ugly. Of course you hope for the best, but should everything ultimately fail, you would hate for unpaid labor to be assessed and nasty negotiations all because you all decided that love would conquer all. Suddenly he’s arguing that his time at the links was for business negotiations and you’re leaking dirty jabs at each other on “Page Six.” I think it’s quite obvious that I am far from the biggest fan of Ashley’s marital situation, but Candiace using that as the only bar for a critique or an easy, unsolicited jab speaks a lot to her insecurities. Anyway, her album is out now, so go ahead and give her some streams if you’re an R&B fan.

Speaking of operating in delusions, Robyn and Gizelle decide to throw a launch party for their podcast, and instead of renting a small venue like anyone with sense would do, they decide to pitch a tent in front of her construction zone that she calls a house and invites the women to a safety hazard with alcohol. There were so many reasons why this should not have happened: (1) Gizelle doesn’t want people she is on uneasy terms with coming in and out of her house, and Robyn, for once, has the good sense to walk her back from relegating them to popping a squat on top of a loose beam and subjecting her to a lawsuit; (2) her steep, narrow driveway only lets cars in single file, which becomes a problem later in the party; (3) she is still trying to pass city inspections in the middle of these ridiculous drinking games. Of course, Robyn’s house is not an option because she is no closer to her dream home than Gizelle, which raises the question: What places these two women at the top of the hierarchy of this ensemble other than skin color and their willingness to back each other up at any moment?

Regardless, in the spirit of the name of their podcast, they ask a series of Reasonably Shady questions, meaning that they push their guests’ buttons and get irrationally offended when their guests push back, particularly Wendy. It does seem that at this point they are seeking to maintain an existing tension with Wendy. The claim about her distaste with Gizelle’s house is as much of a reach as Karen’s commitment to Gizelle’s death wish on Ray — in fact, it never even happened — and the commitment to gaslighting her on the use of the phrase “haters” when there is a whole to-do over how Mia needed to address a conversation via text is over the top. Wendy is not the only one who is confused; she is just the only one who vocalizes it. Karen probably would have as well, but the second dose of the vaccine apparently has her too loopy to see up from down, and the directors get straight to work on giving us the full monty of effects to drill that in, from the fish-eye lens to the buzzing fly; you would have thought Karen is living out Fear and Loathing in Potomac.

Nevertheless, despite the progress made in the last episode, we end up right back where we started with Wendy and the crew. She lays plain the hypocrisies and, to her credit, refuses to back down from her positions, leaving them to call her standoffish, impossible, and disrespectful. Meanwhile, Mia and Candiace fully get into an argument about Mia’s gossiping in the music video. Candiace immediately de-escalates the second Gizelle admits that she also thought the video was low-budget and was equally interested in the financials around Chris. As much bark as Candiace likes to portray, she is just as aware of the power dynamics in the ensemble; she thinks she can one-up Mia but doesn’t want to be on the outs with the inner circle. It’s a tightrope that she will only be able to walk for so long because the Green-Eyed Bandits are only loyal to themselves. If she continues to defer to them, however, any aggression she continues to level at Ashley and Mia — specifically with regard to their behavior this season — will look childish considering that it could be easily directed at the other two.

Next week, the couples find themselves at the Eastern Shore, G finally lets loose, for better or worse, and tensions between Candiace and Mia continue to boil over. See you all then!

• I’ll get it out of the way now: Candle drama is a nonstarter for me, and I’m barely going to commit time to this in my recaps unless you all convince me otherwise. I know how product development works, and Karen is further along, and that’s just kind of it. What’s next, wine label drama? It’s a big market; this is a fictive conflict.

• I find it particularly interesting that whenever Candiace gets called out for the callousness of her insults, she finds a way to justify it. I think it’s a fair rebuttal that other women across the franchise don’t always get the same level of scorn, but it’s not always true; Kenya Moore does get held critically for saying nasty things, as does NeNe Leakes. Phaedra got herself in trouble repeatedly because she let herself get too loose with her reads. They may become social-media lore down the line, but they do get held harshly in real time. Anyway, Mia pointing out that calling another woman a ho as an insult comes from a place of insecurity shouldn’t have unsettled her nearly as much as it did.

• Something about Gizelle demanding respect in her own house when she literally invited a group of them over to her outdoor construction zone so that she could insult them over finger food has my eyes crossing at the absurdity.

• If Robyn has just one of Karen’s drunk voice-mails and releases them upon the interwebs, that might be the most value she’s added to the series throughout its entire six-season run.

• Michael, a glitch in the matrix, continues to grace us with his absence.

Keep up with all the drama of your favorite shows!


By submitting your email, you agree to our Terms and Privacy Notice and to receive email correspondence from us.