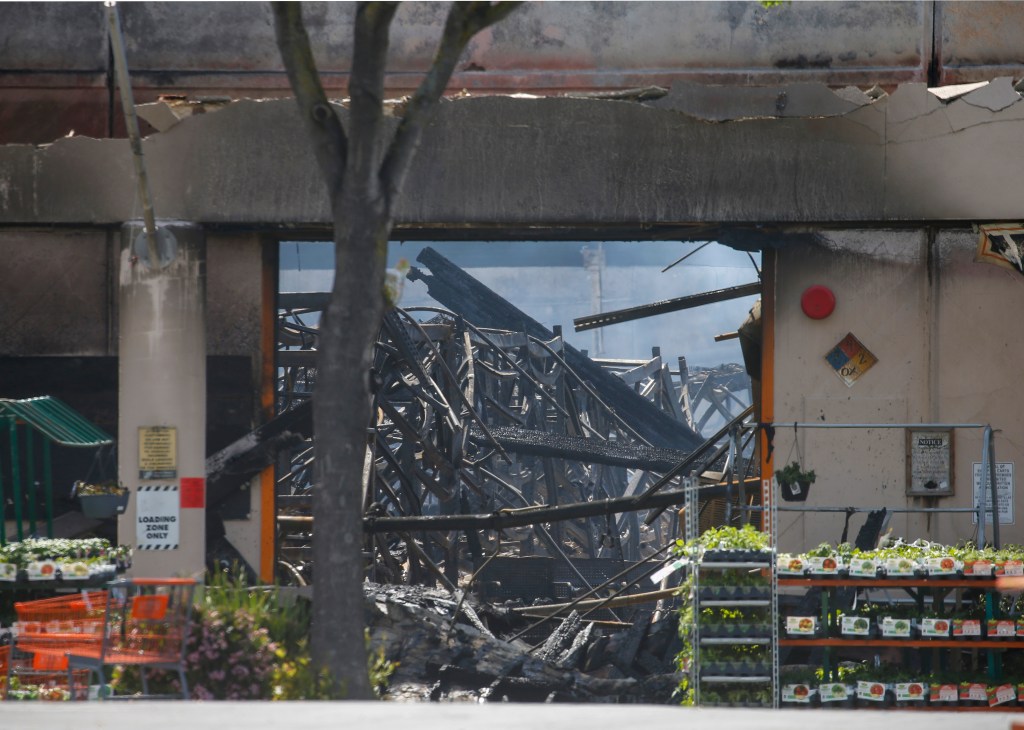 Two days after a rapidly-moving fire erupted in the lumber section of a South San Jose Home Depot, leveling the giant home improvement store, critical questions remain unanswered about what caused such a catastrophic blaze — and how well the store’s fire suppression systems were working when the flames broke out.

First-hand accounts from customers and employees who were at the store when the fire began have raised doubts about when the store’s fire alarms sounded, and whether the store’s sprinklers ever went off. So far, the San Jose Fire Department has yet to answer any questions from this news organization regarding the store’s sprinkler and alarm systems. Home Depot, meanwhile, has referred all questions to the fire department.

“We’re talking to the alarm company, the people who were there and the witnesses to it. All of that will need to be looked at and that’ll be part of the investigation,” San Jose Fire spokesperson Erica Ray said Monday, adding that it could be “days, weeks or even months” before the agency concludes its investigation.

Crews continued to monitor hot spots, as debris trapped underneath the collapsed roof caused small flare-ups, according to fire officials. At the site of the fire, the smell of burning plastic and chemicals lingered in the air. Police were also on the scene to secure the site as investigators inspected the remains of the building in hopes of narrowing in on a cause.

“The roof is doing its job, unfortunately, even in the state that it is in, which is creating a blanket over the debris underneath,” Ray said. “We’d like to get in there to more aggressively tackle some of the smoldering fires, but we want to make sure we’re not compromising the scene, so we’re fighting it from a more difficult vantage point right now.”

The five-alarm fire, which was reported at about 5:30 p.m. Saturday, sent a thick black and gray plume of smoke so far into the sky that it could be seen all across the South Bay. The intense heat that it put off — created by a mixture of lumber, chemicals and paint products inside — was so strong that it was detected by orbiting satellites. It took firefighters six hours to get control of the flames.

Josh Thompson, an employee in the lumber section, was in the back near the breakroom when he heard there was a fire and was told to evacuate. He ran over with a fire extinguisher and tried to put out the blaze, but it was already too late. He then went to the back to check if there was anyone still in the building and alerted a co-worker, who had headphones on and was watching something on her phone. They evacuated through an emergency exit at the side of the building.

Thompson said the fire alarms had gone off and a firefighter told employees the sprinklers were working but they weren’t able to keep up with the fire. Thompson said he himself hadn’t witnessed any sprinklers going off.

Jeff Baham, 54, of San Jose, was in the store with his wife getting paint mixed when Baham said his wife smelled what she described as a campfire. A cashier then walked down the aisle and informed people that there was a fire and they needed to leave.

“My first comment was to the person behind me — why isn’t there a fire alarm?” he said.

As Baham and his wife were exiting the store, someone on the loudspeaker told everyone to leave. Baham said the alarms finally went off once they were outside, and a giant billow of grey smoke rolled through the front door.

“You could see through the doors, the fire falling from the ceiling — embers and big chunks of flaming red coming down,” he said, adding that they never saw any sprinklers go off. “If you were in the back of the store and for some reason waited until the alarm went off, it would’ve been dangerous or maybe they wouldn’t have made it out.”

Philip Hurst, a 36-year-old San Jose resident, was at Home Depot to buy plants and soil and had already made it to his car when he saw a commotion at the front of the store and ran back through the parking lot. He quickly pulled out his phone to take videos and photos of the fire.

About 130 workers were employed at the now-leveled Home Depot store, according to the Nanci Klein, director of the city’s Economic Development Office. Most of those employees are expected to be transferred to one of the five other Home Depot locations in San Jose or those in nearby cities, she said.

Home Depot is one of the top tax-revenue driving businesses in San Jose, as well as serving as a good community partner and gathering place for residents, Klein said.

“It’s a terrible loss,” Klein said. “We’ll be eager, hopefully, to see that this will be rebuilt and get back to all of the benefits — maybe even bigger and better.”

More than 100 firefighters responded to the blaze, as well as to the neighborhood behind store in an attempt to prevent any damage to nearby homes. Evacuations were issued for approximately 15 nearby homes on El Lisa Drive, as well as several nearby stores and businesses.

While there were no reports of injuries or missing people, residents in the area were asked to shelter in place overnight Saturday to avoid exposure to potentially harmful pollution put off by the melting plastics and other hazardous materials inside the store,

Sherrie Butts, 59, who lives behind the Home Depot store and runs a daycare business out of her home, smelled smoke Saturday. Butts — who lives with her 77-year-old mother and walks with a cane — said their neighbors helped them evacuate.

“Within minutes, the white smoke just came in. My throat was burnt. I couldn’t even holler help to get my dog down the stairs,” she said.

The fire damaged her roof and her fence was broken down by firefighters working to put out the blaze.

Henry Estrella, who lives on the corner of El Lisa and El Dori Drive, had just gotten out of the shower when he smelled what he thought was burning plastic. He went out the front door and saw the trees in front of his house engulfed in smoke.  Some embers blew over the rooftops, prompting Estrella’s 17-year-old neighbor Oscar Pack to climb up onto the roof and put them out with a hose.

“I just couldn’t believe it,” he said. “The energy that was in that fire was too much. I thought for sure the houses would’ve burned down here. The firemen did a tremendous job.”