No bones about it: One year later, the popularity of Home Depot’s 12-foot skeleton endures. But good luck finding one 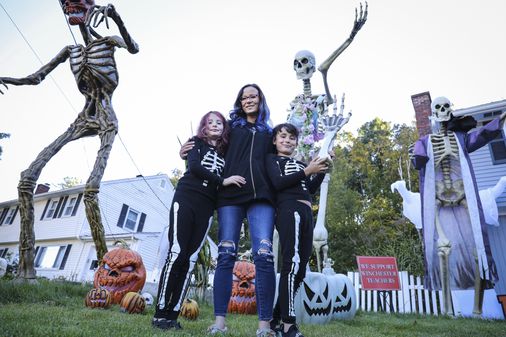 Their eye-catching enormity offered people a bit of comedic relief at a time when the pandemic all but derailed many Halloween traditions. And while its absurd size was amusing, it was also the perfect prop for fans of the macabre who went big for the holiday while stuck at home.

A year later, the popularity of the company’s massive Halloween-themed lawn ornaments hasn’t faltered, and a sequel was even introduced to keep fervent fans coming back for more.

As the spooky holiday approaches, people have been posting excitedly online when they spot one on display. They’ve called Home Depot stores across the region in hopes of tracking one down. And they’ve scoured the secondary market, namely Facebook Marketplace, Craigslist, and eBay, where the $299 retail price has more than doubled.

“I tried to get them as quick as I could this year,” said Moss, 52, who snapped up an original giant-size skeleton and the new “12-Foot Inferno Pumpkin Skeleton” from a Home Depot in Saugus.

Not everyone has been so lucky.

Calls to 10 Home Depots in the area turned up nothing but apologies. In Everett, the skeletons sold out in a single day — weeks ago — and the store hasn’t had them since. A Somerville clerk said, “We haven’t had those in two months.” A person who answered the phone in Saugus chuckled before delivering the bad news. A store in Salem had a dozen in stock at one point, but a line formed the day they went on sale and they were gone in a flash.

People have vented about how hard they are to find. One person told the Globe he checked four different stores but eventually walked away empty-handed. Moss said someone who saw his display driving by offered to pay an exorbitant price for just one. No deal.

Robin Swan, who also has three of the skeletons on her front lawn in Winchester — two originals, and one with a pumpkin head — likened the craze to people lining up for the latest Air Jordan sneakers.

”We actually had to buy [our two new ones] on the secondhand market,” she said. “We called stores, we went to stores, we asked when they were going to be releasing them, and didn’t have any luck that way. Apparently, everyone’s kind of doing the same thing.”

Swan’s family got its first 12-foot skeleton last October, shortly after her mother died. It was a welcome distraction during a difficult time in their lives, she recalled, and provided so much entertainment, they left it up all year long and dressed it in different outfits according to the holiday.

“Having this joyous and exciting thing made a huge difference” for her four children, Swan said. “It was a really important thing.”

In her eyes, three is better than one, so they added the others to their Halloween display this year.

“If I could have 12, I would,” she said. “There’s a lot of different things you can spend money on, but it makes a lot of people happy and it makes us really happy.”

Lance Allen, holiday merchant for Home Depot and one of the driving forces behind the concept, said sales of the “12 ft. Giant-Sized Skeleton with LifeEyes” — its product description — seemed to explode overnight last year, largely due to fandom generated on the Internet.

“It was a way for everybody to just say, ‘Take that COVID, one way or another we are going to celebrate Halloween this year,’” Allen said in a statement. “His social media presence also took him to a whole other level, he really has taken on a whole life of his own.”

The towering displays were the stars of TikTok videos, inspired memes, and earned their own hashtag. As the merchandise got scooped up and assembled on lawns across the country, the scarcity “only deepened the resolve of would-be buyers,” according to The Washington Post.

On Facebook, a private page called “12 foot skeleton group” has more than 34,000 followers, as Business Insider first reported. It’s for people to show off their displays and swap information about how they scored their skeletons in a seller’s market.

“[Boyfriend] drove 10 hours round trip” to get one, one member claimed.

“Just walked in one day, they had two, and the rest is history,” another bragged.

“So lucky!” a person responded.

But it’s not just about owning one. For some, even a sighting during the Halloween season is considered a treat. People have reported seeing them in Weymouth, Lynn, Newburyport, Stoneham, and Providence recently.

Brianne Christopher, 31, said she spotted one while passing through Boxford one night. She took out her phone and captured the moment. Next best thing to owning one, she figured.

“I haven’t seen any others around me; it was exciting,” said Christopher. “You won Halloween if you have it.”