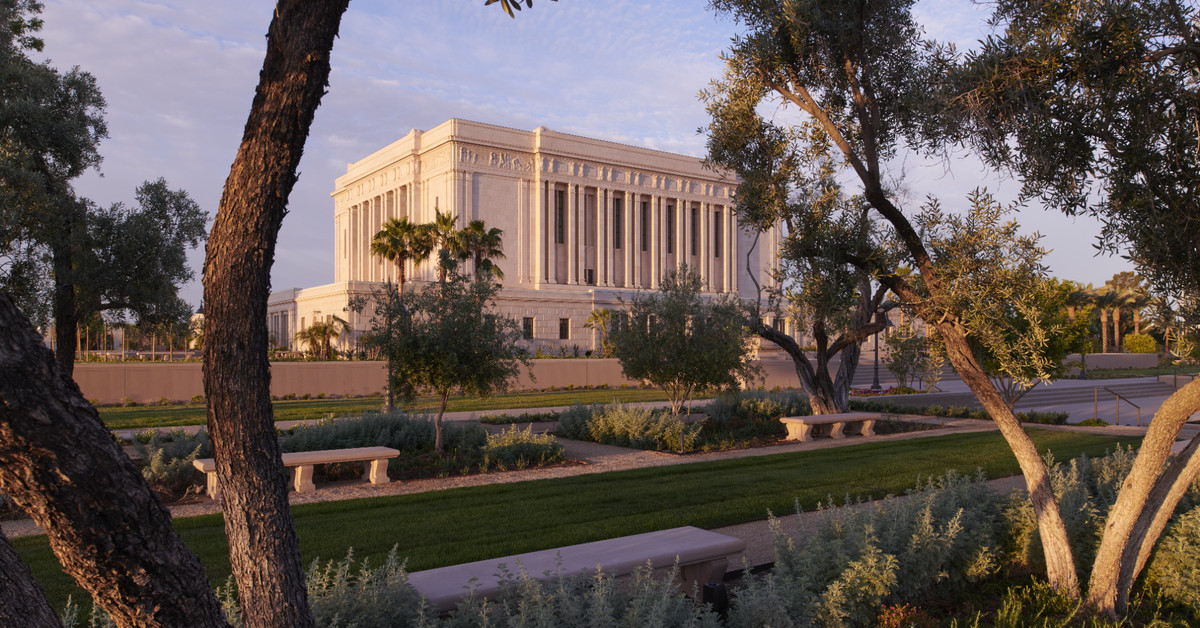 More than three years after it closed for a major renovation, the doors of the historic Mesa Arizona Temple open again this weekend for the first public open house tours since 1975, The Church of Jesus Christ of Latter-day Saints announced in a news release.

A youth devotional is scheduled for Saturday, Dec. 11.

President Dallin H. Oaks of the church’s First Presidency will preside at the temple’s rededication in three sessions on Sunday, Dec. 12, 9 a.m., noon and 3 p.m.

Those on hand were Elder Ronald A. Rasband and Elder Gerrit W. Gong, of the Quorum of the Twelve Apostles; Sister Reyna I. Aburto, second counselor in the Relief Society general presidency; Elder Kevin R. Duncan, a General Authority Seventy and executive director of the church’s Temple Department; and Elder Paul B. Pieper, a General Authority Seventy and president of the church’s North America Southwest Area.

“The Lord will be very pleased (with this remodel),” Bishop W. Christopher Waddell, of the Presiding Bishopric, said in a news release. “It’s clear that everyone that worked on it was blessed. It’s not easy to modernize a building that’s almost 100 years old.”

The Mesa Arizona Temple district includes the cities of Mesa, Paradise Valley, Scottsdale, Payson and parts of Phoenix and Tempe. It will serve about 83,000 members who attend 215 congregations, 17 of which speak Spanish.

There are more than 436,000 Latter-day Saints in Arizona attending 926 congregations, according to the church.

History of the Mesa Arizona Temple

The groundbreaking took place on April 25, 1922. The design was inspired by Solomon’s temple of ancient Jerusalem.

The temple was originally dedicated by President Heber J. Grant on Oct. 23, 1927.

Larry Frost was 10 years old when he attended the first dedication. Now 104 years old, Frost hopes to attend the rededication on Dec. 12.

When originally dedicated, the Mesa temple was the church’s seventh operating temple and the first in the Grand Canyon State. Arizona now has six temples (Mesa, Phoenix, Gilbert, The Gila Valley, Tucson and Snowflake).

One interesting note about the history of the Mesa temple is that it was the first in the church to conduct the temple ceremony in Spanish using live actors in 1945. This was done to accommodate a growing Spanish-speaking population and because the Mesa temple was the nearest for Latter-day Saints in the southwestern U.S., Central and South America regions.

The renovations of the Mesa Arizona Temple

The Mesa Arizona Temple was first renovated in the mid-1970s.

President Spencer W. Kimball, who was raised in Arizona, rededicated the Mesa temple on April 16, 1975.

A second temple renovation started in 2018, which included the relocation of the visitors’ center to enhance the view of the temple from Main Street.

Elder Ulisses Soares, of the Quorum of the Twelve Apostles, dedicated the new Mesa Arizona Temple Visitors’ Center in August.

While the Mesa temple was being renovated, the church orchestrated a three-year community revitalization project with the city that included 240 apartments, 12 town houses, 70,000 square feet of landscaped open space, ground floor retail space and underground parking.

New features outside and inside the Mesa Arizona Temple

The new temple grounds feature an expanded reflection pool, more than 300 olive and palm trees, as well as other ornamental trees, preserved and relocated with other greenery.

A new irrigation system will keep the landscape hydrated by collecting and reusing water.

The new grounds will improve the Mesa Easter Pageant, which is staged in an open area north of the temple, and technology has been added to enhance the Christmas lights. The stage for the pageant now faces west so patrons can await pageant productions with the sun to their backs instead of in their faces.

Inside, those who tour the temple will see the same colors and motifs of the original temple, as well as other popular designs from the 1920s. The classical grand hall, built of gray granite, looks just as it did when the temple was first built.

Artwork has been preserved and restored, including murals in the grand hall depicting Joseph and Hyrum Smith sharing the gospel of Jesus Christ with the Native American nations. Another mural shows John the Baptist giving Joseph and Hyrum the Aaronic Priesthood. Conservators removed layers of paint from years of modifications to the original works, reattached the canvas to the wall and filled in damaged areas.

Instruction room murals were removed to allow repairs to walls and upgrades to utilities. Remnants of the original murals are now displayed in other areas of the temple.

Every effort was made to preserve the original grand hall, said Emily Utt, historic sites curator with the Church History Department.

“When you walk in the grand hall today, that’s about as close as we can get to the original without moving sections back around the room,” Utt said. “When you look at the mural of John the Baptist ordaining Joseph Smith and Oliver Cowdery to the priesthood, (John) has rays of light coming from him. All of those rays of light had been obscured over the years by other people painting over them. And so the mural conservators came in. They removed those elements. And J. Leo Fairbanks’ original John the Baptist is back in his full glory in this temple.”

Linda Curley Christensen and a team of artists were commissioned by the church to create new murals to encompass the four walls of each room, similar to how they appeared in 1927.

“All of the sketches were designed from the original photographs, and even the concept and intent of the original artist was maintained,” Christensen said. “I’ve thought a lot about each of those painters and studied their strokes and studied the remaining pieces and tried to understand what they were portraying, what their goal was. … I became very connected to feeling akin to them. I felt a harmony and a resonance with their intent in what I was portraying. I began to feel like I was just helping them refine and refresh something that they had begun to create.”