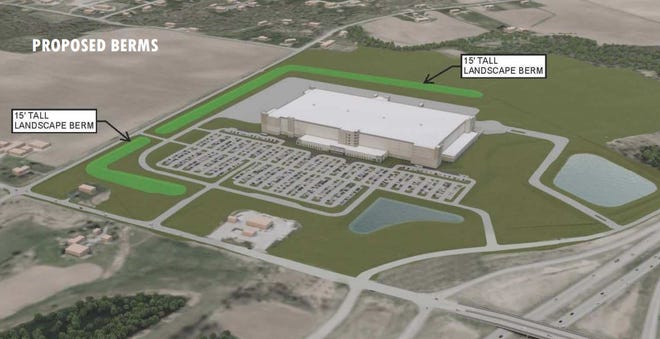 LAWRENCE – A massive distribution center proposed in Lawrence could cost more than $200 million and employ 1,000 to 1,500 people to sustain 24/7 operations.

Trammell Crow, a national property developer based in Dallas, submitted an application to build a 630,000-square-foot, 90-foot-tall distribution center on 150 acres of farmland currently owned by Kaukauna-based Milk Source. The land is bordered to the south by Freedom Road/Brown County S, to the east by Mid Valley Drive and to the west by Williams Grant Drive.

Site plans presented on Wednesday to Lawrence’s Planning and Zoning Board sought to address nearby residents’ concerns about keeping semi-truck traffic off Williams Grant Drive, lighting, operations and landscaping on the site. Trammell Crow representatives also said they would be interested in working with the community on developing a park in the town

“We very much want to be involved and continue that discussion with the community. We’re really excited to be a part of that,” said Trammell Crow’s Morgan Baer Balska.

The large-scale fulfillment center would be about half the height of Lambeau Field, which stands 181 feet tall when including the light towers on the stadium’s east side. The distribution center would have a building footprint more than four times as big as the Resch Expo exhibit hall in Ashwaubenon.

Trammell Crow has not identified the business that would use the distribution center. When contacted this week, a company spokesperson declined to comment on the project.

The warehouse would operate 24 hours a day, seven days a week and will have employees work staggered shifts to reduce traffic in and out of the center.

Blaska said the warehouse would not provide “last mile” transportation service, the logistics industry’s term for a product’s movement from a distribution hub to its final customer or destination. An example of last mile service are the Amazon vans that deliver orders daily. Last mile operations can increase vehicle traffic in and out of a warehouse.

The developers did not say how many passenger cars or semi-trucks would access the site daily, but said peak a.m. and p.m. shift changes would see 400 to 500 vehicles with 20 to 30 of those being semi-trucks.

Site plans include more than 1,200 parking spaces for vehicles and semi-trucks and 15-foot landscape berms along the northwest and southwest edges of the site. Semi-trucks would be directed to access the site via Interstate 41 and Mid Valley Drive in order to reduce heavy traffic on Williams Grant Drive, which Blaska said was a clear, top priority for the community. Semi-truck access to the warehouse would be designed to avoid lines blocking up Mid Valley Drive, too.

This fulfillment center is on a different site and has different building dimensions from a huge distribution center Georgia-Pacific proposed in Lawrence last year, but town residents who live northwest of the property say the scale of the Trammell Crow proposal evoked memories from their fight to stop that project in 2020.

Georgia-Pacific withdrew its request in November to build a 1.1 million-square-foot warehouse in the same general area.

Lawrence resident Kim Sullivan and others who live near both the Georgia-Pacific and Trammell Crow sites along Williams Grant Drive have concerns about truck traffic, the building’s height, noise and other quality-of-life issues.

“We don’t know how many stories that’s going to be but 90 feet is a high-rise. That’s big,” Sullivan said. “I feel like this is almost exactly what we opposed last year in a different location that is a lot taller.”

The company’s request involves 151 acres, just north of the existing Kwik Trip on Freedom Road, currently for sale at prices ranging from $932,000 for a 13-acre parcel to $6.25 million for a 25-acre parcel along Freedom Road. Trammell Crow’s submissions to the town indicate about 40 acres at the north end of the site would stay undeveloped.

Patrick Wetzel, the town’s administrator, said a public hearing has been scheduled for Nov. 17 at which time residents can speak about the project. He also said residents can send questions and concerns to the town ahead of time.

Wetzel said the developers have not requested direct financial assistance from the town. But he did say the town is looking at extending water and sewer service to the area along Mid Valley Drive for multiple existing and potential developments in that part of the town.

Residents said they understand farmland in Lawrence is likely to be developed at some point but would like the town to develop a mix of uses that better complements residential subdivisions built off Williams Grant Drive in recent decades.

“We love the country, but we’re realistic: We know it’s going to be developed, but give us some input on how it develops,” Sullivan said. “Let’s have a logical plan that incorporates neighbors so we can understand where we’re headed long-term.”

A Facebook group of Lawrence-area residents who opposed the Georgia-Pacific warehouse has turned its focus to vetting the new warehouse project now. In an Oct. 4 post, the group urged others to contact town officials with questions, concerns and opinions about the development ahead of upcoming meetings.

“The leaders of our town need to hear from you!! Ask them questions — hold them accountable for the future of Lawrence! Is this the legacy they want to leave for future generations of this town?” the post read.