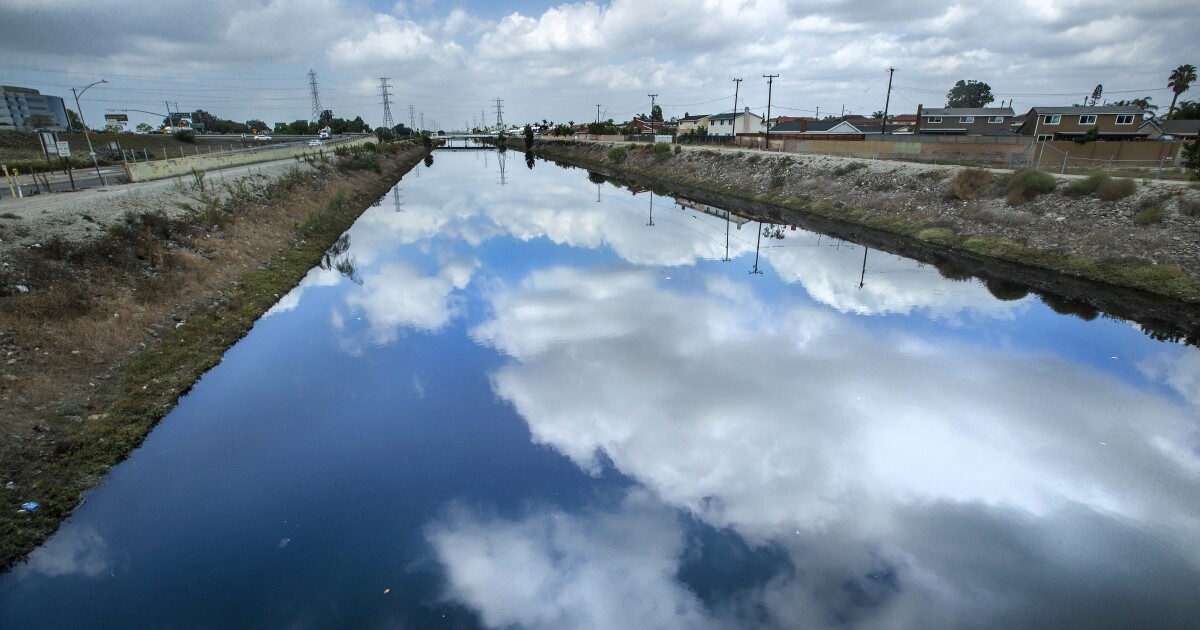 Los Angeles County filed a lawsuit Thursday accusing property owners and tenants of negligence in connection with a warehouse fire that sent discharge into the Dominguez Channel last year, causing a sickening odor to linger in the Carson area for weeks and displacing thousands of residents.

The county, along with its fire protection and flood control districts, said the warehouse’s owners and tenants knew of fire code and hazardous materials violations before the Sept. 30 fire but did nothing to abate them. It is seeking to recover millions of dollars in costs associated with the investigations, cleanup and public relocation effort, as well as injunctions and civil penalties.

The warehouse on South Avalon Boulevard in Carson is owned by Prologis Inc. and was leased at the time of the fire by makeup companies Virgin Scent Inc. and Day to Day Imports Inc. Day to Day and Virgin Scent are owned and operated by Akiva Nourollah, Yosef Nourollah, Yehuda Nourollah and Yaakov Nourollah, according to the complaint.

In March, a Prologis technician inspecting the warehouse noticed pallets of flammable materials at an outdoor storage yard stacked 15 to 20 feet high, with boxes leaning over and spilling onto the ground.

The technician reported what he found to the property manager, who informed the tenants.

Two months later, after the fire protection district cited Day to Day for the improper storage of hundreds of pallets of flammable liquid at a separate warehouse on East 59th Street in Los Angeles, inspectors learned the company could also be improperly storing hazardous or flammable materials at its Carson warehouse.

In May, the fire protection district inspected the Carson warehouse and cited Day to Day again with improper storage of hazardous materials including essential oils and hand sanitizer.

Inspectors returned in July and August to find that the violations had not been rectified and that, in some cases, the situation had worsened.

In July, the district “observed millions of pounds of flammable materials haphazardly stored in the exterior yard,” and in August, “inspectors observed that the fire apparatus access road was being blocked … by hundreds of pallets of hand sanitizer.”

Weeks later, on the afternoon of Sept. 30, the fire started, “fueled by over ten million pounds of flammable and hazardous materials that were illicitly stored there,” according to the complaint.

It took fire crews three days to extinguish the blaze. The millions of gallons of water they used flushed chemicals and debris into storm drains that feed the Dominguez Channel.

After the fire, the defendants allegedly failed to properly clean up the site. The fire protection district again issued numerous citations.

In early October, residents of the area started reporting the odor of rotten eggs, sewage and vomit emanating from channel. The odor caused nausea, vomiting and headaches and was deemed a public health nuisance.

“The foul odor lingered for weeks and rendered a significant portion of the city of Carson and nearby areas nearly unlivable,” the complaint says.

Thousands of residents were temporarily displaced from their homes because of the odor, which, according to the complaint, was caused by the materials that were washed into the channel, “prompting an unprecedented release of hydrogen sulfide … into the air.”

County Supervisor Holly Mitchell, whose district includes Carson, said in a statement that the lawsuit was central to efforts to seek accountability for communities around the Dominguez Channel.

“While this lawsuit will not heal all the harm and inconvenience experienced by the thousands of impacted residents,” she said, “it will help ensure the individuals at fault pay for the pain they caused that could have been prevented.”