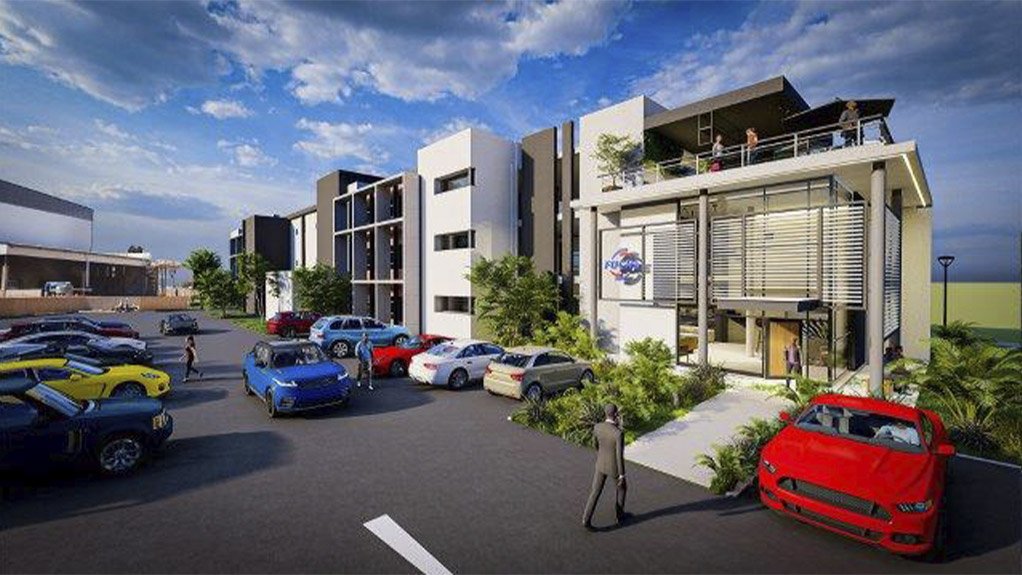 / MEDIA STATEMENT / This content is not written by Creamer Media, but is a supplied media statement.

The new head office and warehouse for FUCHS LUBRICANTS SOUTH AFRICA is on track to be completed this month. “It will be completed on time and within budget, which is a significant achievement not only for such a complex industrial project, but also due to the fact that Covid-19 regulations and protocols had to be taken into account at all stages,” comments MD Paul Deppe.

The company is investing over R250 million in the expansion at its existing location in Isando, Johannesburg in the wake of rapid growth in Sub-Saharan Africa. The feasibility study for the initial scope of work was embarked upon in 2019, with DRA Global appointed as the Engineering, Procurement and Construction Management (EPCM) consultant. The Phase 1 expansion, which consists of the office complex and new warehouse, commenced in June 2020. While Phase 2 is still in concept development, it is planned to comprise a new lubricants plant to bolster the company’s strong growth and expansion plans for the continent.

ILS was appointed as the warehouse consultant. The warehouse itself will incorporate the latest technology, including all product being wrapped, with 100% selectivity and batch control introduced. The latest materials-handling equipment will also be implemented, such as narrow-aisle lift trucks stacking to 17 m high. The warehouse system itself will be based on a fully integrated barcoding system using SAP.

In addition, the fire protection system is being designed to the latest international best practice. The warehouse features 13-m-high cast concrete tilt-up panels that provide a firewall between the warehouse and the production facilities, which are close by. The use of these panels in this size is believed to be a first in South Africa.

The new head office building involves the refurbishment of an existing building on-site. “We took the existing structure back to its bare bones and created a new concept entirely from scratch that was based on the context of it being an industrial building within an industrial precinct,” highlights Graeme Palmer, Owner and Director of GPD Studio, the architectural firm contracted to the project. The main design elements were off-shutter concrete work, face brick, two-tone plaster finishes, steel, and glass.

Sustainability elements incorporated in the final building include low-flow sanitary fittings, movement sensors on all lights, which have low-wattage LED fittings, and double glazing to enhance thermal performance, with one skin comprising low-emissivity high-performance glass. Natural shading elements have been included on the façade in the form of concrete ‘eyebrows’ to provide shade in summer and allow light in for warmth in winter.

In addition, cavity walls reduce heat transmission, while PV panels reduce the overall power demand. Another feature is a rainwater harvesting system due to the large roof area provided by the warehouse, with one tank to irrigate the new landscaping and a second tank to supply the urinals and cisterns.

Looking to the future, Deppe is confident that the new head office with its visibility will be testament to FUCHS’ strong growth prospects on the continent. “We have a lot of confidence and are growing market share. This makes our Phase 1 expansion such an important step forward that will consolidate our South African operation as the regional hub for Sub Saharan Africa,” concludes Deppe.