In a historic King William mansion renovation, couple tackles much of the labor themselves with new kitchen, resurfaced walls 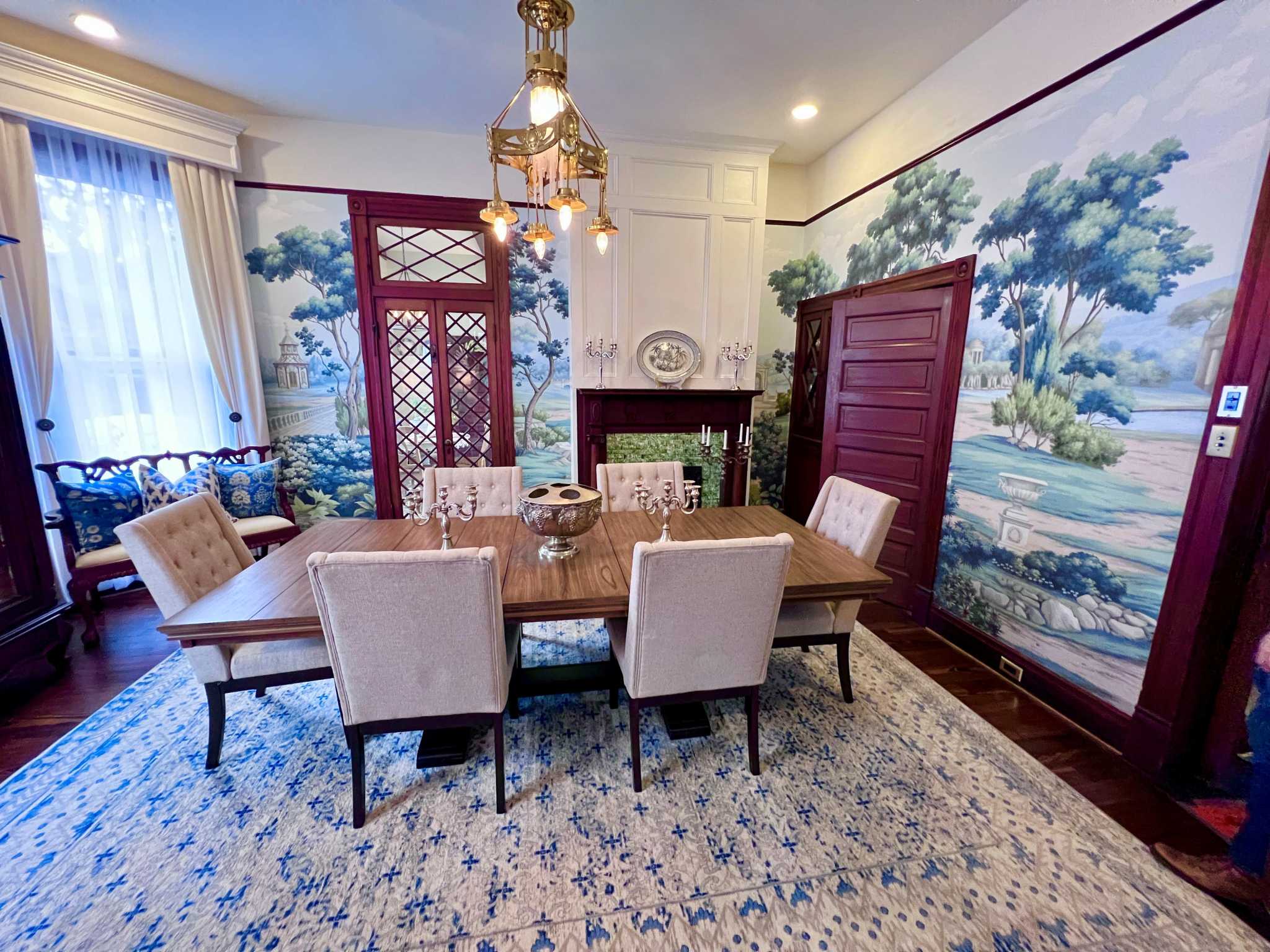 If a playwright tried to tell the story of how Jimmy Moore and Levi Stoneking came to own The Maxey House, a two-story Victorian Eclectic mansion on Madison in the King William Historic District, it would be criticized as hackneyed and clichéd. But sometimes fairy tales are real.

The story begins in 2010, shortly after the two met online. At the time, Moore was appearing in a play at the Classic Theatre here and Stoneking lived in New York. The first time they met in person was when Stoneking came to visit during Fiesta. While he was here, the two had their very first date at the beloved King William Fair porch party held at The Maxey House, then the home of the Classic Theatre co-founders Diane Malone and her late husband Rick.

Wait, there’s more. During the party Moore told Stoneking that if it was ever going to work out between them, they’d have to eventually settle in San Antonio. After bouncing around from New York, Austin, New Braunfels, New Orleans and finally Houston, they decided in the summer of 2020 to move to San Antonio.

And now come the deus ex machina. Diane Malone sent Moore a Facebook message that June wishing him a happy birthday and, almost as an afterthought, mentioned that they were selling their house, which Moore had pined after for years.

Moore, 35, and Stoneking, 36, moved into the Malones’ carriage house rental before buying the home in early 2021 with the money they saved when the pandemic forced them to cancel their planned wedding.

And if you haven’t suspended enough disbelief, in December Moore was named executive and artistic director of the Classic Theatre, the same theater on whose boards he trod when he first visited the house.

“I can’t believe we have this little fairy tale that’s part of this life,” Moore said.

Built sometime before 1906, The Maxey House had had only two owners since 1945 before Moore and Stoneking, an attorney, purchased it in December 2020.

So the five-bedroom, three-bathroom house located on Madison in the King William Historic District was in relatively good shape, with many original details, such as the five fireplaces and multiple chandeliers, still in place.

The previous owners had done a lot of the heavy lifting, upgrading plumbing, stabilizing the foundation, installing central air conditioning. But the interior hadn’t been updated in several years. The couple saw no need for a complete makeover, but they did want to give it a refresh, all while retaining its historic integrity.

“You don’t own a house like this; you’re only the caretaker,” Moore said. “I never felt it was our place to knock down walls and open things up. If you want that, go buy a new house. Whenever we do anything we make sure that it’s either undoable or that it’s in the original style of the house.”

Once the six-month renovation was completed in July, one of the jewels of the King William area had been polished to a high-gloss. Throughout the process, Moore’s background in theater helped inform much the redesign, particularly in the lighting.

They wanted walls that would reflect the light in the home, so one of the first things they did was scrape and sand away the texture from the plaster walls. “Combined with the wall paint we chose — it’s called ‘Agreeable Gray’ — the flattened walls now have this really great ability to absorb and reflect the light,” he explained.

He also eschewed overhead lighting whenever possible because he finds it too glaring. And where it is installed, he insisted on dimmers.

“Nobody looks good under overhead lighting,” he explained. “And you want to make sure that your guests look beautiful, you look beautiful and all of your stuff looks beautiful.”

The biggest part of the renovation was a to-the-studs redo of the kitchen, which is located in the rear of the house in what was originally the back porch. It was enclosed, they guess, sometime in the 1950s or ’60s. The couple added new cabinets, a backsplash of larger-than-normal subway tiles and tall board and batten wood paneling along the walls.

Most everything in the room is white, including the rustic brick wall that was originally the back of the house. This gives the room a fresh, light look, especially compared to the heavier, vintage wood furnishings elsewhere in the house. It also accentuates Moore’s collection of flow blue china, which he displays atop the kitchen cabinets and paneling.

The most eye-catching part of the room is the new herringbone-patterned brick floor, with bricks of red, black, brown and blue and thick grout joints inspired by the New Orleans courtyards the couple have seen. Moore and Stoneking, who did much of the renovation work themselves, said the kitchen floor was the hardest job of the whole process.

“We were on our hands and knees for a week,” said Stoneking. “We were working with the bricks, the grout and these big buckets of water, night after night.”

Stoneking estimated the renovation cost between $50,000 and $100,000 — he still hasn’t tallied it up yet. But that might have doubled had they not contributed their own elbow grease and gotten help from Moore’s sister, a woodworker, and his brother, a contractor.

Although they’ve been in the house less than a year, it feels like they’ve been there much longer. Every room is filled with vintage and reproduction furnishings, much of it given to them over the years by family members. The rest they’ve collected in the many cities they’ve lived in. There’s also plenty of artwork, souvenirs from their travels and books, posters and other keepsakes from Moore’s career in theater.

“One of the things I love about this house is there are so many people’s stories represented here,” Moore said. “I feel like anybody who’s ever walked through this house has their story told here.”

The front foyer is dominated by a classic, double-L-shaped staircase they say helped sell them on the house. They painted it and added a plush carpet runner and say it perfectly framed the large Christmas tree they decorated for the holidays.

Under the stairs they created a cozy niche with two comfortable reading chairs. “My mother loves those chairs, so whenever she’s here she ends up snuggled up in one,” Moore said.

In the library to the left hangs one of a pair of art nouveau chandeliers with hanging crystal pencil prisms they removed and cleaned. Because it was missing several pieces, they filched some from its twin in the adjacent dining room.

“So now we’re in search of more pencil prisms to complete the second one,” Stoneking said.

Perhaps the most subtly spectacular room in the house is the dining room, where they installed a pastoral wallpaper mural from Virginia-based Paul Montgomery Studio. Encircling the room, it features trees, flowers and stone bridges crossing narrow country streams.

“It’s supposed to look like watercolor, which is kind of a hallmark of older southern homes that I’ve always loved,” Moore said.

They also enclosed the brick above the dining room fireplace in handsome paneled wood they built themselves. “I have definitely learned to use a chop saw to do it,” he said.

“And I did the window cornices,” Levi volunteered.

Moore’s theatrical eye can also be seen in one of the guest bedrooms, which has a fireplace with glossy pink tile surrounding the firebox. He accentuated that color by outfitting the room with pink bedding that belonged to his grandparents, a pair of pinkish wing chairs, even his grandmother’s pink ceramic bride’s basket from the 1930s.

“It’s neat the way sometimes you’re struck by architectural features, and it automatically makes you make a connection to something else.” It’s a house full of connections.