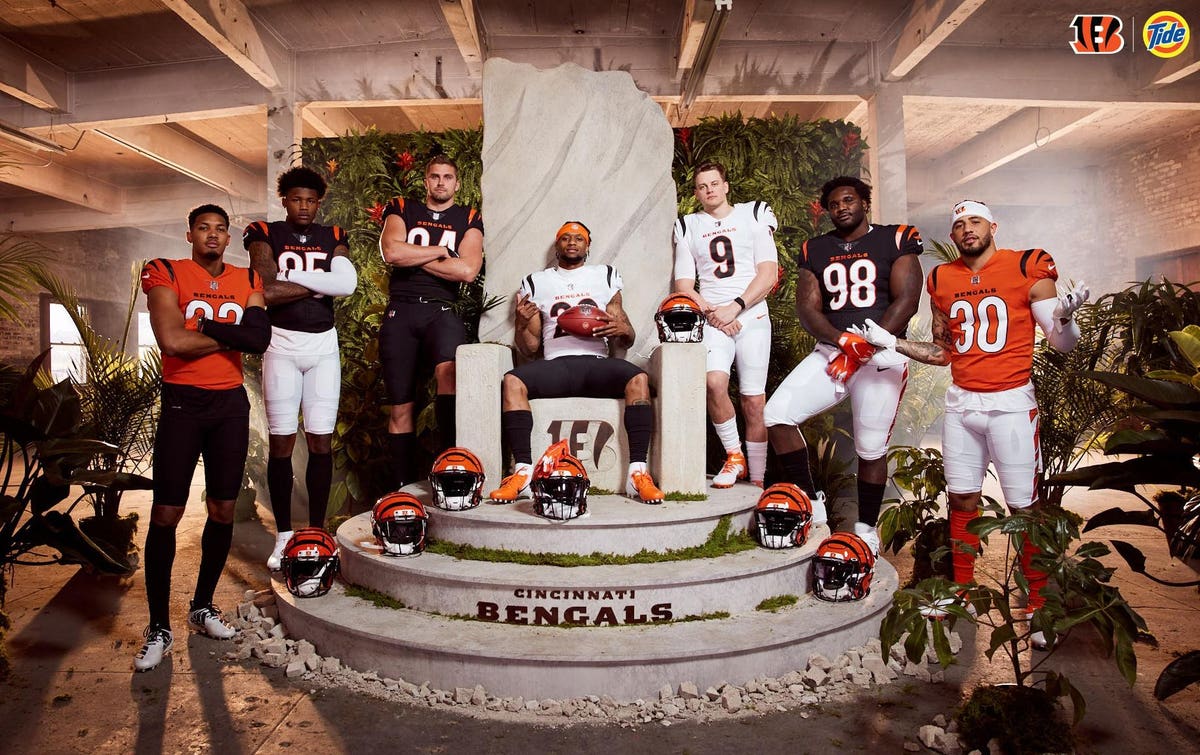 You’ve seen the new Bengals jerseys, but there’s a great deal that happens behind the scenes before fans lay their eyes on a new concept like this. And sometimes, even the best laid plans go awry.

This is the story of how the strategists and storytellers of Warehouse Collaborative quickly pivoted after the jerseys were leaked early—to plenty of criticism—and how they found creative ways to win the support of fans.

Warehouse Collaborative was already well underway with their initial jersey reveal plans back in early 2021 when five of the jerseys found their way into a random eBay
store. The internet exploded, but unfortunately it was less like an enjoyable firework show and more like a dumpster fire. It was not the reception the Bengals wanted after rebranding their jerseys for the first time in 17 years.

“I was mad about the leak because of how careful we had been leading up to that point to make sure nothing had ever leaked digitally,” said Sean Herron, a partner in Warehouse Collaborative. “We were very tight with it. Most of the people in the Warehouse didn’t even know we were working on this project, because I didn’t want to be the source of any leaks.”

Brian Sand, a partner at Warehouse Collaborative, can joke about the situation now that it’s months later and they were able to turn the campaign into something the fanbase embraced, but he still remembers what it was like to see those leaked photos.

“The jersey is hanging on a terrible wire hanger in someone’s closet. It was the worst picture you could possibly see of it.”

“My first reaction was to buy them,” said Herron. “There were six on there, so I bought them, but within the next day my order got canceled. I think it was a Sunday night, and I stayed up all night coming up with other ideas and called the Bengals on Monday morning saying we needed to pivot. I knew we had to adjust.”

The plan to pivot started with a handful of fans who were sticking up for the Bengals amidst an onslaught of negativity on social media during the jersey leak. Warehouse Collaborative decided to invite those fans to be part of the official jersey reveal by bringing them to the stadium for a sneak peek behind the scenes.

“The exciting thing on our end was to be able to reward the positivity in the fandom,” said Sand. “A lot of times everyone gets stuck in the negativity when it comes to these teams, and the team not doing what they want, and not doing things for the fans. So, to be able to go to these really awesome fans who are like beacons of hope, it was a refreshing thing as a Bengals fan. And then also to just reward positivity on the internet, I was pumped about that.”

Warehouse Collaborative’s plan for the jersey reveal had always centered around a concrete jungle they were building out around a custom designed Bengals throne. Originally, they had a list of influencers they were going to invite to be part of the campaign, but that list got thrown out the window in favor of the Bengals fans who’d stood up for the team on social during the leak.

“I didn’t want an influencer to show up, see the jersey that they saw online and exhaust the excitement of the activation we were putting together, because the influencers we were originally targeting weren’t necessarily Bengals fans,” said Herron. “They just were local talents of all different backgrounds, like we had video gamers coming and we had plant influencers. It was just more about getting popular community people advocating for the team.”

Herron said he was nervous to make the call to Elizabeth Blackburn, the Bengals director of strategy and engagement—and granddaughter of team owner Mike Brown—because she’d been the most excited about partnering with the influencers.

“Once she realized we were going to be rewarding people that were shining a light on the team, there were no other questions asked. She trusted the pivot, and that’s super refreshing.”

Blackburn didn’t just give the pivot the green light, she personally got on video calls to invite each of the fans to be part of the jersey reveal, which you can see in the video below.

Herron said he set up the calls with the fans from his own Twitter account, which has nothing to do with the Bengals.

“I told them we were doing a focus group. I tried to make it sound super boring. My background when they got on was just a white background. It was all stale on purpose, because I knew I had her joining the call. So, all of their reactions were genuine. The fact that they know the granddaughter of the founder of the Bengals by face right away, it just shows how big of fans they are, and the reactions were super.”

“And it was cool for Elizabeth. I saw her glowing because she doesn’t have social accounts. She’s not trying to personally fight for the Bengals online, but she’s aware of who’s out there fighting the fight for her, so it was cool for her to get to connect with these people.”

Sand agrees that having Blackburn be part of the whole process added that extra element that made it special.

“To hear her—someone from their family—thanking the fans, and thanking them for supporting their family business, was a very refreshing thing here in Cincinnati and for Bengals fans,” said Sand. “It was a personal touch, but it also signified it’s kind of a turning of the tide or changing of the guard over there, which gets our city pumped about the Bengals. They’re doing things now that fans have been calling for for years.”

Once the decision was made to go in the new direction, the concrete jungle was moved to an abandoned floor in Warehouse Collaborative’s building to prepare for the jersey reveal video being shot with a handful of players: Joe Burrow, Joe Mixon, D.J. Reader, Jessie Bates, Sam Hubbard, Tee Higgins and Tyler Boyd. They even flew in former Bengal Chad “Ochocinco” Johnson to be part of the reveal.

From there, everything was packed up and moved to Paul Brown Stadium for executives to see the concrete jungle try on a jersey and sit on the throne. Then the whole process was repeated for the fans who’d been brought in as part of the pivot, who each got to have the same experience as the Bengals players and executives.

The launch for the jerseys was made official the next day, and reviews of the jerseys were overwhelmingly positive.

And the story isn’t over yet. The throne that was the centerpiece for the campaign will be at the center of continuing programming, including a new pregame tradition.

“We’ve already seen companies printing shirts,” said Herron. “We’ve seen people 3D printing their own phone charger. So, the throne is now a new icon for our stadium, in my opinion, probably for the next 20 years, at least. And it was basically on accident.”

Warehouse Collaborative had a staff built for a new “Ruler of the Jungle” pregame initiative involving the throne that features a fan leading the crowd in the “Who Dey” chant right before kickoff. Bengals superfan James “JB” Brown became the first “Ruler of the Jungle,” a recognizable fan who’s been to nearly every home game in team history and led the team out onto the field for many years.

Herron says Warehouse Collaborative’s intentional formation not as an agency but as a collective of entrepreneurs, each with different talents, is what allowed them to come up with a campaign that withstood a massive leak, develop a pivot and come out with strong support from the fans.

“We have a warehouse full of entrepreneurs. Every day they show up. They show up, but they don’t have to show up. Basically, they wake up knowing how to provide for themselves, but we have the ability to package everybody’s skills in this place and turn that into a company that can afford to literally build something big.

“This Bengals piece is the perfect example of what I know any company in the country could now use us for, because the Bengals came in with all those complications—the private jersey being designed, the leak, all this different stuff—and we’re calling an audible in real time and making things happen.

“The goal would be to have the biggest companies understand that the speed and deliverables when you round up 25 talented entrepreneurs, it can’t be matched if you’re calling an ad agency for some ideas. We’re not the retainer and two years from now you’ll see what we can do for you. We’re super results driven.”

“I love the Bengals piece because it’s a perfect case study to show why we built The Warehouse.”

What Warehouse Collaborative and the Bengals have built together from the near ruin of a leaked jersey reveal has quickly become the foundation for what fans hope will be an exciting new era in Bengals football.