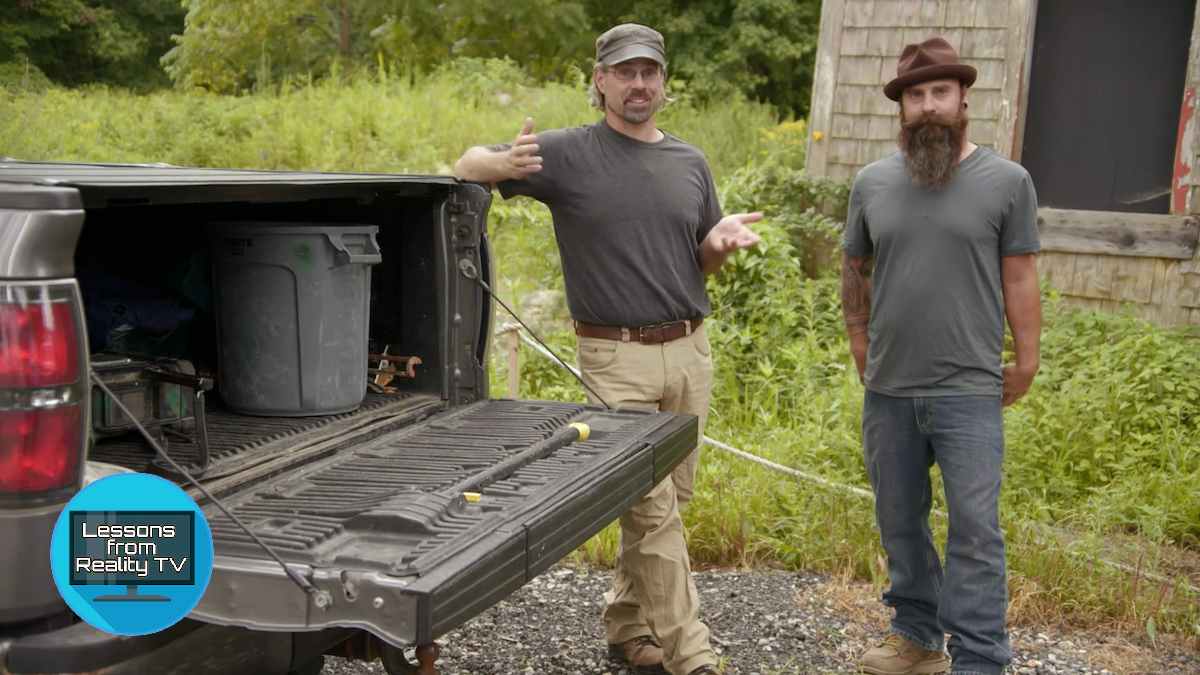 Home preservationist Mike Lemieux, carpenter Rich Soares, and designer (and Lemieux’s wife) Jen MacDonald are the hosts of HGTV’s newest show, “Houses With History”—and their first renovation in the premiere episode is a doozie.

In “One on the Cranberry Bog,” Lemieux, Soares, and MacDonald buy a 1735 build in Plympton, MA, for $150,000. The house has a lot of problems, including rot under the door, a dip in the roof, mildew, and—you guessed it—an unstable foundation.

Even former New Kids on the Block member Jonathan Knight and Kristina Crestin—stars of the show “Farmhouse Fixer“—stop by to take a tour. They love what this team has done.

“It’s nice to see that this house ended up in good hands and that you guys turned it into this,” says Knight. “You did an amazing job.”

Read on to find out how this home was completely transformed.

Center the chimney for a symmetrical look

When Lemieux and Soares first see this house, it looks pretty rough on the outside. The exterior is dark, dingy, and surrounded by overgrown shrubs.

The one feature that really bothers Lemieux is the small, off-center chimney. This is a Center Chimney Cape home, he says, but the chimney is not, in fact, in the center.

The team learns this house sustained some storm damage in the 1930s. When the original chimney was destroyed by a falling tree, this new chimney was built, smaller and off to one side.

The trio spends $3,000 on the chimney restoration, creating a larger, centered chimney. Then, to show it off, they spend an extra $3,500 on a copper chimney cap, which Lemieux says were common embellishments for English cottages back in the day.

“It will dress it up and it would fit right in with the primitive Colonial aesthetic of the house,” MacDonald says.

Watch: Here’s Why You Might Want to Buy an Older Home Instead of a New One

Show off a home’s historic features rather than hiding them

Right inside the door are two beams flanking the entry. At first glance, these look like typical posts, but Lemieux tells Soares they are gunstock beams: a special beam that is wider at the top and thinner down at the bottom. While these beams don’t look particularly lavish or exciting, Lemieux says they’re lucky to even see them at all.

“Typically they’d be hidden behind plaster, because people back then thought exposed wood made their home look unfinished,” Lemieux says. “Whereas now, we want to feature them because they are so cool and unique to the time period of this house.”

The trio keeps these beams exposed, which adds a rustic flair to the entryway when the house renovation is complete.

Wide-plank flooring has a historic look

When they first tour the house, Lemieux and Soares are thrilled to find original pine flooring in some rooms. Bonus: The planks are wide, likely making them historically significant.

“The largest trees that could be cut down, that would produce boards over 19 inches, were only to be used at the discretion of the king,” Lemieux explains, referring to when the U.S. Colonies were ruled by the King of England. “So if you had a wide boards in your house, you were either very well-connected or a rebellious colonist that didn’t really care what the king said.”

Whether the original homeowner was a rebellious colonist is hard to determine, but Lemieux and Soares certainly want to keep these beautiful floors, and replicate this look in spots where the pine was replaced in past renovations.

Luckily, the new flooring is a close match to the historic flooring, creating a cohesive look.

An island should match the era of the home

In order to make this kitchen more functional, MacDonald decides to add an island. Still, considering the age of this house, she knows she can’t add a typical modern island. So instead she uses a furniture maker’s workbench.

“I’ve been saving it for just the right project,” MacDonald says. “It will tie in wonderfully with these gorgeous old beams and make them really shine.”

This workbench has a historic look to it, giving the whole kitchen a classic style. Along with the ceiling beams, this rustic wood table really fits in the space.

Plenty of homeowners want to add amenities to their backyards—but for this old house, an ultramodern hot tub or barbecue would seem out of place. So the trio decides to add a stone fire pit instead as a nod to the original homeowner.

“Back in the 1800s, Simeon Churchhill lived in this house,” Lemieux explains. “He was a prolific stonecutter. We really wanted to harken back to that legacy and put a stone fire pit in here.”

The fire pit is not only an appropriate nod to the home’s history, it also gives the buyers a great spot to gather that won’t feel out of place on this property.