House Hunting in Mexico: A Modern Hillside Masterpiece in Acapulco 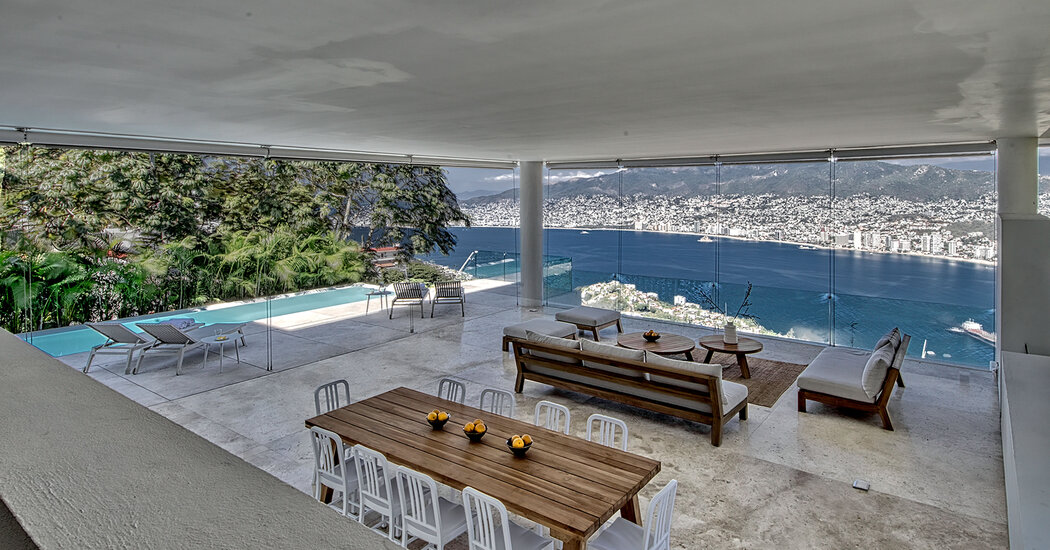 This contemporary five-bedroom home overlooks Acapulco Bay from within the hillside gated community of Las Brisas in Acapulco, on Mexico’s Pacific Coast. The house was designed by the renowned Mexican architect Miguel Ángel Aragonés and completed last year, said Laura de la Torre de Skipsey, an agent with Mexico Sotheby’s International Realty, which has the listing.

“The design is very vertical,” she said, with more than 14,000 square feet of living space distributed across five floors. The spare white interiors, floor-to-ceiling glass walls, and neutral marble flooring can be lit up at night in soothing neon hues. Electronic shades throughout the house allow for sun cover and privacy.

The main entrance from the driveway opens into a hallway with stairs leading to the fourth-floor living area, an open, glass-walled space with sweeping bay views and 16-foot ceilings. An adjoining patio has an infinity pool. A wall separates the sleek Italian kitchen, which has a large center island and high-end appliances, from the living area.

Above the living area, on the roof, is a garden with a stone patio and marble bar. Below, on the third floor, there are two bedrooms large enough for king-size beds, as well as a family room with a kitchenette, a fully equipped cinema room and a small exercise room with a massage table.

Two more bedrooms are on the second floor. One is sized for two double beds, and the other has room for four twins — two on the floor and two on a sleeping loft above.

The main bedroom suite, on the ground floor, has sliding glass doors that open to a courtyard with a shaded seating nook and a second pool.

Among the neighboring properties, Ms. de la Torre de Skipsey said, is the notable Casa Arango, a circular concrete house with a deep, open terrace designed in the 1970s by the American architect John Lautner, an early apprentice of Frank Lloyd Wright.

The iconic Las Brisas resort, which dates to the 1950s and is known for its white-and-pink color palette, has a private beach club. “Sixty years ago,” Ms. de la Torre de Skipsey said, “Las Brisas was the most important place to be. All the famous actors and billionaires had houses there. It’s a hill, so all of the houses have these amazing views of the bay.”

Acapulco, the largest city in the Mexican state of Guerrero, has a population of roughly 780,000, according to the National Institute of Statistics, Geography and Informatics. A favorite getaway destination for the Hollywood elite and British royalty in the 1950s and ’60s, the area has been plagued by violence in recent years, though it remains a popular vacation spot for Mexican tourists.

The average sale price of a home in Mexico rose 7.1 percent in the first half of 2021 compared with the same period in 2020, to 1.324 million pesos ($64,300), according to the country’s Federal Mortgage Society, which tracks the price of homes with mortgage credit. (Mexico does not have a multiple listing service.) Guerrero, one of Mexico’s 32 Federal Entities, saw prices rise 7.3 percent; in Acapulco, they were up 7.6 percent.

The price range for homes in Acapulco is very wide, said Lola Aguirre Gutierrez, the broker at Century 21 Lol and Associates. “There are properties facing the sea from $25,000 to $3.5 million,” she said. “It is a versatile market — Acapulco is for all budgets.”

Most properties are for resale, she said. New condos are in short supply, except in what’s called the “Diamond Zone,” a newer, upscale resort area in the south of the city. (Las Brisas sits within this zone.)

The average price per square meter in Las Brisas is about $2,500 ($232 a square foot), Ms. de la Torre la Skipsey said. (Many properties in Mexico, including this one, are marketed in U.S. dollars.)

Ivan Castillo, a real estate attorney and general manager of Secure Title Riviera Maya, said that the Acapulco housing market is largely a local one. “One reason is that the Acapulco airport barely has any international flights,” he said. “So it’s more common that people from Mexico City enjoy that area. There are foreigners there, but you can hardly see any.”

The pandemic caused a sharp decline in international travel to Mexico. During the first quarter of 2021, the 11.4 million visitors recorded by the economic affairs unit of the Embassy of Mexico to the United States were about half the number recorded in Q1 2020.

The U.S. State Department currently advises against travel to Guerrero state because of crime and kidnapping.

Who Buys in Acapulco

About 85 percent of buyers in Acapulco are from Mexico, particularly from Mexico City, Puebla, Morelos, Pachuca and Querétaro, Ms. Gutierrez said. “We still retain the interest of some North Americans, but very few Europeans,” she said.

Transactions are completed through a notary, and buyers must also fulfill government requirements put in place to prevent money laundering. “The notary needs to verify that the money being paid for the property comes from the buyer’s own account,” Mr. Castillo said.

The agent’s commission in Acapulco is usually between 4 and 6 percent of the sale price, and is paid by the owner or developer, Ms. Gutierrez said.

The transfer tax in Acapulco is 2 percent of the purchase price, Mr. Castillo said. Closing costs, including the cost of setting up the trust, usually total between 4 and 7 percent.

The annual property taxes on this home are around $1,390, and the yearly maintenance fees are $7,650, Ms. de la Torre de Skipsey said.