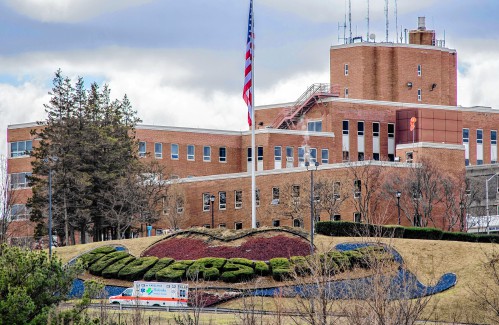 BOSTON — As the Legislatures heads into its final days of formal lawmaking for the year, House Speaker Ron Mariano is eyeing action next week on legislation that would put more scrutiny on major health care providers expanding into territory served by smaller community hospitals.

The Quincy Democrat also hopes to see the House make progress toward reforming oversight of the state’s soldiers’ homes in Holyoke and Chelsea, and expanding the offshore wind bidding process to ensure that Massachusetts gains a foothold in the industry before it takes off on the East Coast.

The Legislature plans to break from formal sessions for the year after next Wednesday, putting pressure on lawmakers to wrap up negotiations over how to spend at least $3.8 billion in American Rescue Plan Act funds and take any additional votes that leaders want to see happen before January.

“We have a number of issues that we’d like to tackle. Obviously my health care issue, the determination of needs tweaking of a loophole that I think adversely affects community hospitals,” Mariano told Bloomberg Baystate Business on Wednesday.

The Committee on Health Care Financing polled out several bills on Friday morning, including the speaker’s hospital bill (H 1260) that would give the Health Policy Commission the authority to investigate the market impact of major hospital expansions, not just mergers and acquisitions, that require an additional license because they would establish new satellite campuses.

The bill is targeting what Mariano described as a trend of providers like Massachusetts General Brigham opening satellite facilities in suburban locations that compete with smaller community hospitals for privately insured patients that command higher rates, leaving community hospitals with a greater share of patients on Medicare and Medicaid.

“Mass General moving in down the street brings with it a higher rate of reimbursement for their services than the community hospital gets, significantly higher. In some cases more than 30 percent,” Mariano said this week.

The committee’s redrafted bill would require any provider applying to the Department of Public Health for a determination of need for their expansion project to include a letter of support from the CEO or board chair of existing independent community hospital if the primary service area for the proposed expansion project overlaps with the service area of the pre-existing hospital. The support letter would not be necessary if the project is a joint venture.

The bill also proposes to reestablish the Health Planning Council under the HPC, rather than the Executive Office of Health and Human Services, requiring the development of a state health resource plan that would identify the state’s needs for health care services, providers, programs and facilities and identify the resources to meet those needs.

The poll, according to officials, opened Thursday night and closed Friday morning. Senate members of the committee reserved their rights on the speaker’s bill, according to a person familiar with the vote, but it was not immediately clear what other pieces of legislation advanced out of committee. House Chairman John Lawn could not be reached for comment.

A spokeswoman for Mariano said the speaker anticipates holding a vote on the hospital oversight bill this week, though a precise date has not yet been chosen.

Mariano has previously pitched his hospital oversight bill as companion legislation to the $250 million in ARPA funds that the House has proposed to invest in financially stressed hospitals. The Quincy Democrat said that without government intervention, some community hospitals might be forced to close, though he said he would not support price setting.

“I suppose if you wanted to we could get in and start to set prices, but we didn’t want to do that. We want the market to play out, with some constraints,” Mariano said.

While the speaker’s health care bill was advancing, two other priorities identified by Mariano were still in development.

“I have another bill that’s based on the recommendations of the Holyoke Soldiers’ Home commission that we’d like to see moving, and then I have an offshore wind bill that’s pretty big that we’re trying to move and we’re still working on but we’re hoping that we can make some strides in the next four or five days to at least get it out of committee,” Mariano said.

The speaker made no mention of voting reform legislation passed by the Senate that would permanently codify voting-by-mail in Massachusetts, and see the state become one of more than 20 that allow same-day or election-day voter registration.

Following multiple investigations into the deadly COVID-19 outbreak in the Holyoke Soldiers’ Home early in the pandemic, Rep. Linda Dean Campbell and Sen. Michael Rush filed an expansive bill in September that proposes to overhaul the oversight of the state’s two soldiers’ homes, with new certification requirements for the facilities and its leaders.

That bill (H 4195) had been scheduled for a hearing in front of the Committee on Veterans and Federal Affairs last Friday, but it was canceled and has not been rescheduled.

The House isn’t alone in trying to push some of its priorities forward before the mid-session recess. Senate President Karen Spilka this week helped unveil a significant mental care bill that will be debated next week.

During his interview on Bloomberg radio, Mariano said he was “disappointed” that the Senate does not appear to be interested in taking up a sports betting bill before the break, but said he was not giving up hope for its eventual passage.

“I wouldn’t call it dead. Am I disappointed that we haven’t taken it up? Absolutely. We’re leaving a lot money on the table,” Mariano said, estimating that the House-backed bill could generate $70 million to $80 million in licensing fees that would be renewable every five years, and another $60 million in taxes on sports wagers.

Asked if he could possibly trade a vote on sports betting in the Senate for consideration of Spilka’s mental health bill, Mariano said: “I have seen things traded, so there’s always an opportunity for discussion, and whether it be those two things for each other or something else for something else, listen, it goes on and certainly I’m happy to talk about any of this stuff with her.”

Mariano said betting on college sports continues to be an issue, but given the volume of betting that takes place on college basketball and football he said, “I do think though if we’re going to seriously talk about doing this we need to recognize the fact that college sports makes this work.”

Finally, the speaker shed a little more light on the health episode in Florida over the summer that resulted in him getting fitted with a pacemaker. Since June, Mariano said the pacemaker has been disconnected from two chambers in his heart because it was no longer needed.

“It was a situation where I got severely dehydrated and had to get a jump-start,” Mariano said.