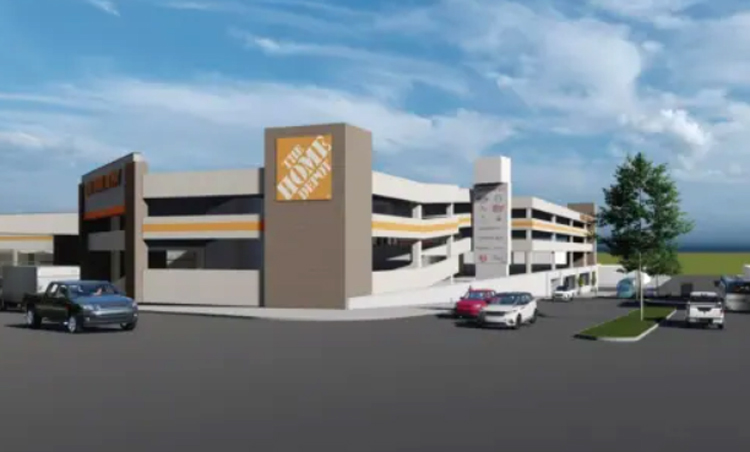 The proposed store might be developed at 5050 Broadway in North Oakland at the corner of Pleasant Valley Avenue, according to the city planning records.

The development would include a Home Depot main retail store and a garden center, the municipal files show.

A vehicle garage with five levels, including a basement parking level and four levels above ground, would be part of the development.

Home Depot could employ an estimated 145 to 175 workers at the store and garden center, according to documents on file with the city.

The application is very preliminary and was submitted as a way to gauge the city’s reaction to a project of this sort.

The site where Home Depot and the garage would be developed totals roughly 4.6 acres.

Unlike a typical Home Depot layout, the store won’t feature a vast sea of surface parking spaces if it’s built.

The Home Depot development proposal would include a total of 449 parking spaces. Of these, the multi-level parking structure would accommodate 354 stalls and a surface parking lot would total 95 spaces.

The Home Depot proposed development site is part of The Ridge retail and restaurant complex, whose anchor merchant is a Safeway store.

Oakland City Councilmember Dan Kalb, in a prior interview with this news organization, expressed some concern about the prospect that a Home Depot store might be built at this site.

“A Home Depot is not the best concept at this location,” Kalb said.

A mixed-use development might offer a preferable approach for the property, Kalb said.

The proposed Home Depot would be built at a location that appears to be greatly underserved by large hardware stores, a review of retailer websites shows.

“A lengthy review process is needed if this is something that is being seriously considered here,” Councilmember Kalb said.