Home Depot or housing? Residents push back on proposal for giant Rockridge lot 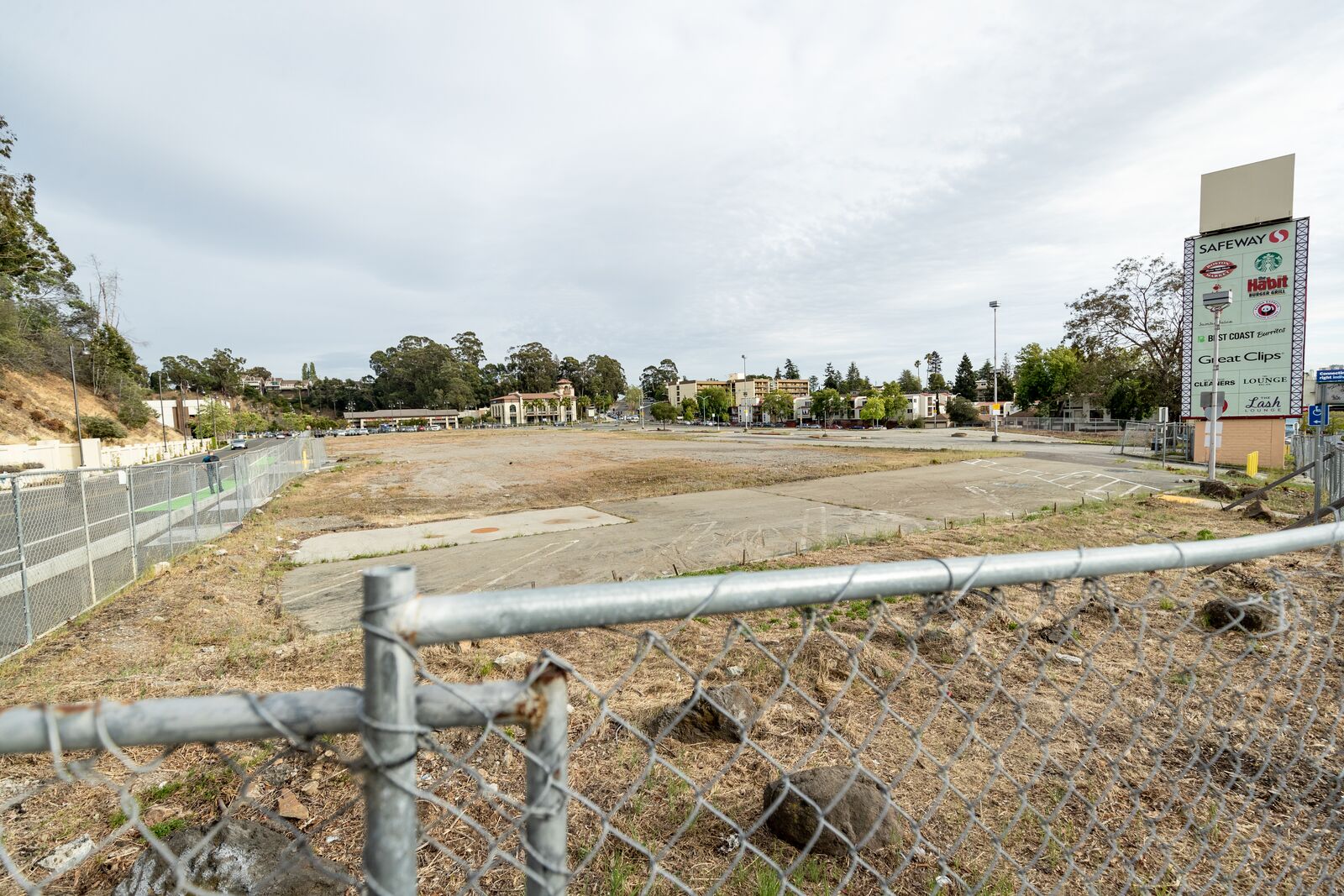 For about five years, a massive vacant lot has occupied one of the four corners of the intersection of Broadway and Pleasant Valley Avenue, at the southern edge of Rockridge.

This month, developers filed a preliminary application to explore opening a Home Depot on the 15-acre property, along with a four-story parking structure.

The news, first reported by the The East Bay Times, has largely been met with dismay from neighbors and community groups who have long hoped to see housing or independent shops rise on the primely situated lot.

“A giant, corporate, big-box thing is not really neighborhood-serving,” said Kirk Peterson, an architect who co-founded the local group Upper Broadway Advocates and serves on the board of the Rockridge Community Planning Council. “The corner is a giant parking lot, in a culture that’s supposed to be moving away from cars.”

The Home Depot would represent the long-awaited second phase of the redevelopment of the entire surrounding site. The first phase, the neighboring “Shops at the Ridge” shopping center finished in 2016, replaced a longstanding CVS (originally Longs Drugs) with a Safeway as the flagship store.

A different, smaller Safeway was previously located on the now-vacant lot, along with a bank. Demolition of the bank in 2017 and 2018 was delayed because of asbestos in the building.

Decades before that, it was the site of the Bilger Quarry, where the Oakland Paving Company mined sandstone and quartz.

The whole property, both the shopping center and vacant lot, is now owned by the Bay Area-based Alvin B. Chan Inc. The company could not be reached for comment.

Newport Beach-based Terramar Retail Centers, or TRC, holds the master lease for the property, meaning they can develop the site and rent out the buildings to other tenants, within the terms of their lease with Alvin B. Chan, and pending standard city approval.

Asked about the Home Depot proposal, a TRC representative referred The Oaklandside to the home improvement store for comment. A Home Depot spokesperson declined an interview request, saying, “It’s really early days on this.”

Initial documents submitted to the city describe a 102,000-square-foot main building and a smaller “garden center,” along with 421 parking spaces, more than the 129 spaces required by the city. The company says the store would employ up to 175 workers.

Online, a couple people have posted supportive comments, welcoming the store in a part of Oakland that doesn’t have a Home Depot. Others worried its arrival would undermine the nearby, well-liked Cole Hardware on College Avenue or ACE Hardware on Grand. There is also a Home Depot about two miles away in Emeryville and another about 7 miles away in Fruitvale.

Tim Mulshine, one of the Rockridge residents who have criticized the proposal, called the design a “monstrosity” on Twitter. He told The Oaklandside he’s not inherently opposed to a Home Depot on the site, but is unhappy to see the large parking structure facing Broadway, “generating all that traffic.”

“If the city is actually concerned about climate change and general livability there, they shouldn’t allow it to proceed as proposed,” said Mulshine, a member of the group East Bay for Everyone, which advocates for housing development. He suggested a mixed-use complex at the site, including residential and commercial space.

The vacant lot, at 5050 Broadway, has a commercial zoning designation that would allow for some housing on the site along with retail.

But multiple people who’ve seen TRC’s master lease for the site told The Oaklandside that the property owner, Alvin B. Chan Inc., prohibits any residential development.

“I think they’re between a rock and a hard place,” said Peterson about TRC.

Stuart Flashman, also a Rockridge Community Planning Council board member, said the group has met with TRC a couple of times over the years, and at one point the developer was interested in building a mixed-use center including housing, but faced opposition from the property owner.

“We think that residential makes a hell of a lot of sense,” said Flashman, a land-use lawyer. “That’s the one thing that’s really going up in value, so we don’t understand why they don’t want it.”

TRC did not respond to a request for confirmation that their lease includes a clause prohibiting residential development.

The company is responsible for two other smaller shopping centers in Oakland, one on College Avenue and one on Redwood Road, both featuring a Safeway. Previously, TRC and JRDV Architects floated a different Broadway “phase two” proposal, an elaborate, multi-level extension of the shopping mall. That plan was ultimately scrapped.

Virtually all the respondents rejected the idea of a big-box store or a car dealership, while most responded favorably to the idea of a park, apartments, restaurants, small boutique stores, a gym, or a sports field, according to results shared by the groups.

The neighborhood groups also recently petitioned for the clean-up of the vacant lot, which had turned into “urban blight,” according to Peterson. TRC cleaned the site in recent weeks.

City Councilmember Dan Kalb, whose North Oakland district includes the Broadway shopping center and vacant lot, has expressed reservations about a Home Depot opening at the site. He could not be reached for an interview by publication time, but he’s recently said he’d support a mix of retail and housing there.

In 2013, before the first phase of the project began, Kalb was supportive of more retail opening at the center, to keep shoppers and tax revenue in Oakland. Some residents were pushing for housing then too, but the owner was already opposed to the idea, Kalb told media at the time. At that point, Safeway was the master leaseholder.

In the time since the Shops at the Ridge project got underway, multiple new housing developments have sprung up on other lots right around the site, and along Broadway toward downtown. The intersection, which is where 51st Street turns into Pleasant Valley, is located near transit stops, schools including Oakland Tech, and multiple popular commercial strips.

Peterson said he’d like to see the immediate area, which includes the former California College of the Arts campus, developed in less of a “piecemeal” fashion.

“It would be great if there was some kind of vision for this district,” he said.

Home Depot or housing? Residents push back on proposal for giant Rockridge lot