Home Buyers Who Went All In on Evergrande Now Want Out 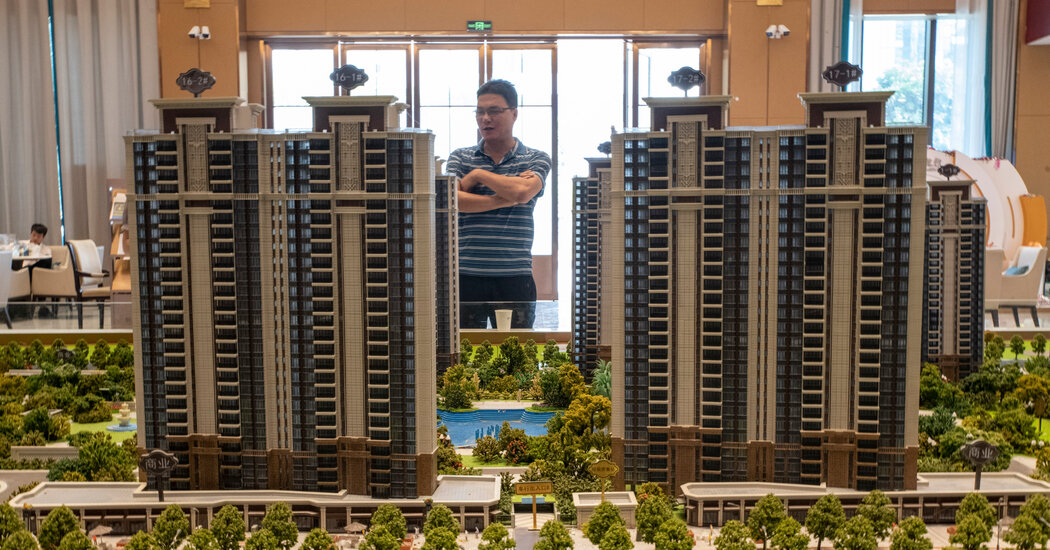 China is trying to cool its costly and dangerously debt-ridden housing market, where high prices and go-go levels of borrowing and spending are increasingly seen as a national threat.

But as the troubles of a major property developer and its $300 billion mountain of debt drive a government effort to contain the peril, Beijing risks hurting a major driver of its crucial economic growth engine: home buyers like He Qiang.

Mr. He was so optimistic about property in China that he bought an apartment from that property developer, China Evergrande Group, then became a real estate agent himself, selling the company’s apartments to hundreds of other families. “It was the peak of Evergrande’s glory,” Mr. He said.

He is much more pessimistic these days. Mr. He, who is from the southern city of Yueyang, has yet to move into his apartment because Evergrande has stopped construction. So many other people are nervous about buying homes, he said, that he’s considering going back to selling cars.

“People aren’t in the mood to buy property anymore,” Mr. He said.

The real estate boom that once attracted young professionals like Mr. He is experiencing a drastic overhaul. At one point, buying was so frenzied that properties would sell out within minutes of being offered. Speculation sent prices soaring. Real estate grew to provide more than a quarter of the country’s economic growth by some estimates, with homes becoming the main savings vehicle for Chinese families.

Nearly three-quarters of household wealth in China is now tied to property. The loss of confidence in the market could spill over to lower sales of cars and appliances, further hurting the economy. Already, weak retail sales in China have signaled that consumers are feeling increasingly insecure. As more buyers shy away from home sales, experts say Beijing’s decision to intervene in the market and curb debt may risk overall growth.

“We are indeed seeing a very serious slowdown in the property market, with falling prices, sales and construction activity, and this is likely to drag down economic growth in the next couple of quarters,” said Arthur Kroeber, managing director of Gavekal Dragonomics, an independent economic research firm.

Evergrande was once a paragon of China’s real estate boom. More recently, though, it has shaken global markets with news of a possible collapse. It has missed several key payments to foreign investors in recent weeks. On Monday, it missed another round of interest payments on two U.S. dollar bonds, a person familiar with the matter said, requesting anonymity because the information is confidential.

Waiting for a lifeline, it halted trading of its shares last week and announced the potential sale of a lucrative unit.

The company’s troubles have elicited recent comments from central bankers around the world and even the U.S. secretary of state, who urged China to “act responsibly” in handling Evergrande’s future.

China’s 100 biggest real estate companies are expected to report that sales in September plummeted by more than a third from a year earlier, according to China Real Estate Information, an industry data provider. Fantasia, a developer known for luxury properties, unexpectedly defaulted last week, sending shock waves through the financial markets.

The month may have been worse for Evergrande. The developer has already warned investors that it expects a “significant continuing decline” in sales. And as its cranes and hammers stop in cities across the country, some 1.6 million home buyers remain in limbo waiting for their apartments.

Mr. He said his friends and neighbors who had once been interested in buying real estate now told him that they worried about putting a down payment on an apartment that might never be built. Families once lured by Evergrande’s slick sales offices and impressive marketing are staying away.

“People worry, ‘If I buy now, what if the developer has a sale later?’” Mr. He said.

He doesn’t blame them.

Evergrande stopped the work on his own apartment in June. Construction at three of its other sprawling projects in his city have either stopped or are expected to stop because builders said they had not been paid. The dramatic headlines focused on property in China are likely to keep home buyers away for longer than just a month or two.

Online government forums designed to receive feedback from local citizens are now inundated with complaints from angry families that bought apartments from Evergrande. Some wondered if they should keep paying the mortgage on a property that hasn’t been completed. One used the forum to ask if his lifelong savings would simply be “thrown into the water” if Evergrande went bankrupt.

A group of home buyers on a forum in Guangzhou said they had learned that Evergrande placed the money from their down payments in a private bank account and not the one stipulated by the local authority and monitored closely. Another home buyer, in Meishan in Sichuan Province, used the forum to plead with officials, “Please uphold justice for your people!”

An economic reshaping. China is enacting new measures to change how business works and limit executives’ power. Driven by a desire for state control and self-reliance, these changes mark the end of a Gilded Age for private business that made the country into a manufacturing powerhouse and a nexus of innovation.

China’s leader, Xi Jinping, is recasting China’s business world in his own image. Above all else, that means control. Where executives once had a green light to grow at any cost, officials now want to dictate which industries boom, which ones go bust and how it happens.

Many measures have already been implemented. The Chinese government has tightened supervision of the country’s internet Goliaths, declared all financial transactions involving cryptocurrencies illegal and detained top executives from troubled companies. Meanwhile, China’s largest developer, Evergrande, is teetering with no word from officials about a bailout.

What China does next will be significant. If Chinese officials save Evergrande, they risk sending a message that some companies are still too big to fail. If they don’t, as many as 1.6 million home buyers waiting for unfinished apartments and hundreds of small businesses, creditors and banks may lose their money.

The long-term outlook is unclear. Some analysts say Mr. Xi’s measures and the push to curb excess borrowing have already made a big difference. But the world’s No. 2 economy is slowing, and the Chinese government may have to work harder to rekindle it.

Even as prominent investors question whether an Evergrande collapse could lead to China’s so-called Lehman moment, referring to the investment bank that triggered the 2008 global financial crisis, Beijing has been largely silent, having vowed to no longer rescue companies once considered too big to fail. Many local officials have been left on their own to respond to the growing frustration.

Local governments in cities as far and wide as Shiyan, Shenyang and Chongqing have each set up special task forces to help manage the potential fallout. One official in the southern city of Shifang, responding to complaints on a government forum, said the local construction regulator, the police and other government bodies had met and informed the developers and contractors of “the grim consequences” they faced because of delayed construction.

The regulators who engineered the property slowdown have started to make moves to bolster the sector if things get worse. China’s central bank last month issued a rare comment saying it would monitor the real estate market. While a reckoning in the financial markets is unlikely, the central bank has also opened emergency spigots to make it easier for local banks to draw more money, just in case.

“It is preparing the firefighting equipment,” said Dinny McMahon, an analyst for Trivium, an advisory firm focused on China. “Clearly, financial regulators are starting to get a bit nervous about the way things are going.”

Without a clear message that Beijing will help Evergrande and other developers continue construction projects and deal with the enormous debts, many Chinese families are holding on to their money and holding off buying new homes.

Mr. He is still waiting to hear from Evergrande about his apartment. Though the developer has not sent him a notice of delay, he can see that construction on his building stopped several months ago, and has had to reconsider his plans to get married next May. The apartment was supposed to be finished by the end of the year, giving him time to decorate so that the space could feature prominently in the wedding festivities.

“Now with this delayed construction,” Mr. He said, “the wedding will be postponed, too.”