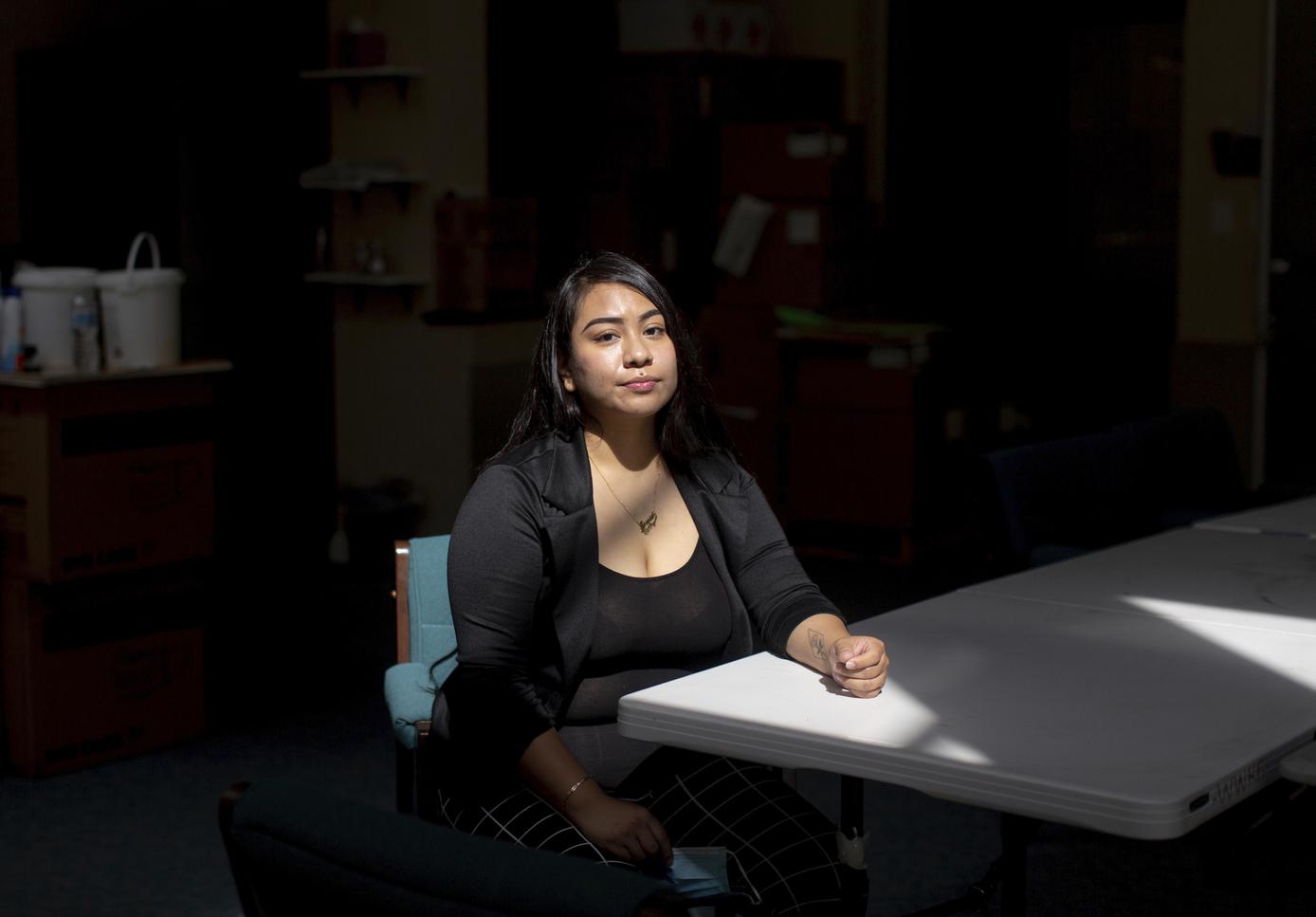 The breakable items were the worst — dishes, glasses, picture frames. Her heart sank when she heard them rattling as the two conveyor belts, one at ankle height and one at waist height, continuously glided by.

Yesenia Barrera’s job at the Amazon warehouse was to remove individual items from boxes, scan them, prep them for delivery, place them in a tote and then carry them 10 feet away to another conveyor belt.

Fragile goods had to be encased in bubble wrap; liquids had to be wrapped in plastic to prevent spills. Those extra steps slowed her down, making it hard to meet her quota of processing 100 items an hour.

“My body was having to rush to do everything right,” said Barrera, 23, who worked at an Amazon fulfillment center in Rialto (San Bernardino County) from mid-2018 until she was abruptly let go in January 2019 for too much “time off task,” although she said she never received any warnings. “I was lifting items off the conveyor belt, bending and twisting a lot. It took a toll.”

Now a proposed California law, Assembly Bill 701, would clamp down on warehouse speed quotas, saying they cannot jeopardize health and safety, such as by impelling workers to take risky shortcuts or to skip mandatory rest breaks. It would ban penalties and retaliation related to productivity rates. It also would force warehousing companies to detail their quotas to employees and regulators, and create legal paths for employees to challenge working conditions.

The first-of-its-kind bill is aimed at all warehouse distribution centers, but Amazon is clearly the main target. Both of California’s legislative bodies passed AB701, but Gov. Gavin Newsom hasn’t said if he will sign it by the Oct. 10 deadline. “The bill will be evaluated on its merits,” his office said in an email.

The pandemic has been a boon to e-commerce giant Amazon, now the nation’s second-largest employer after Walmart with 950,000 U.S. workers and a plan to hire 125,000 more for warehouse and transportation jobs, which were recently boosted to start at $18 an hour.

Behind the scenes, rapid delivery of Amazon orders involves warehouse workers who must process goods quickly or risk being disciplined or fired. Some say they must skip restroom breaks and suffer on-the-job injuries in the frantic pace to “make rate.”

Barrera, who earned $15 an hour as a “seasonal worker,” meaning she had no benefits such as insurance or sick time, said she often skipped personal needs such as using the restroom — a five-minute walk away — or getting a drink of water.

She also dreaded the heavy items — cases of soda, multipacks of detergent, sacks of dog food, weights for working out.

“I was usually at the back of the line, so I ended up with the boxes everyone else was avoiding— heavier items and ones that took longer to prep,” said Barrera, now an organizer with the Warehouse Worker Resource Center, which tries to improve working conditions in the industry and supports AB701.

While the bill’s backers say it will protect workers in a fast-growing industry where speed has become paramount and conditions can be harsh, numerous business groups oppose the measure, saying it is micromanagement that will hurt business and consumers alike.

Amazon would not comment on the bill but said employee health and safety is its top priority, and it invests heavily in safety measures. Fewer than 1{49352ce17ba8b8c977b46090d4022735cbbf9c8d2a96e7181f87be9b36a1fd69} of employees are terminated for performance issues, the company said.

“AB701 is too far-reaching and could have a lot of unintended consequences,” said Rachel Michelin, president of the California Retailers Association. “We already have cracks in the supply chain because of COVID; this could continue to strain it which would affect the end users, the consumers of California.”

The bill would affect distribution centers across multiple industries, driving up prices for all kinds of goods, including fresh food, Michelin said. She is also concerned that it could unleash a new wave of lawsuits, making California inhospitable for warehouse operators.

But those who support the bill say it’s crucial to prevent workplace injuries. A variety of reports from news organizations and groups such as the labor-backed Strategic Organizing Center based on data from the Occupational Safety and Health Administration show Amazon workers get injured at a higher rate than those at other warehouses.

“Workers are getting hurt,” said Christian Castro, a spokesman for the Los Angeles Federation of Labor, which is backing the bill — and hoping to organize Amazon warehouse workers. “Our dependence on e-commerce has grown exponentially. As companies like Amazon shorten delivery times, it puts more pressure on workers. There is constant stress to keep up and not get fired.”

“These types of injuries are unfortunately common across the industry,” spokesperson Rachael Lightly said in an email. She said research showed that workers ages 18 to 24 — the range of many of Amazon’s new employees — “were found to be most likely in comparison to any other generation to claim a work-related MSD,” or musculoskeletal disorder. Therefore, “the data is skewed,” she said.

Still, the company wants to improve and has hired 6,200 safety professionals and invested millions in safety measures and improvements, Lightly said.

Amazon documents show it had 153,000 workers in California as of late 2020, many of whom work in its 60 fulfillment and sorting centers and 50 delivery stations (the last point before packages are loaded). Its major warehouses are heavily concentrated in Riverside and San Bernardino counties, near the ports of Long Beach and Los Angeles. It has warehouses throughout the Bay Area, but some of the largest ones serving this region are located just outside it, in the San Joaquin Valley town of Tracy.

Ellen Reese, chair of the labor studies program at UC Riverside, is co-authoring a book about Amazon’s impact on communities, and she previously co-edited one called “The Cost of Free Shipping: Amazon in the Global Economy.”

After Reese and her associates interviewed 82 current or former Amazon warehouse workers in the Inland Empire, she found some common themes.

“A lot of them were very concerned with the work rates and feel that under that pressure they are often cutting corners around safety guidelines,” she said.

“Many workers felt they didn’t have time to use the restroom; that’s not good for the body,” she said. “Warehouses are enormous, so the bathrooms can be quite a walk away. In this situation some pee in bottles and trash cans.”

One 24-year-old woman, a sortation associate at an Amazon warehouse in Los Angeles, said she injured her knee at work, leading to a six-month medical leave during which she had to fight the company to get workers’ compensation. She asked to remain anonymous for fear of retaliation at her job and was granted anonymity in accordance with Chronicle policies on anonymous sources.

Her job involves grabbing packaged orders from a conveyor belt to scan them and sort them just before they are put on trucks for delivery. She is a “blue badge,” meaning a full-time employee.

“We have to work at a certain pace, so we’re moving really fast — bending, kneeling, trying to scan upwards of 350 to 400 packages an hour,” she said. She performed fewer tasks per item than Barrera and hence had a much higher quota. “The (mandatory rate) changes every day depending on how big the volume is. There are managers walking back and forth announcing what the rate is. If you don’t scan fast enough, they come into your aisle and say you have to scan faster.”

On the day she was injured, a manager came three different times to say, “‘You’re not meeting your rate; I believe in you; I know you can scan faster,’” she said. “I felt so pressured; I was just grabbing packages, reaching, kneeling and bending. One package I grabbed, bent over and reached to put it away, and I twisted and popped my knee.”

She kept working, but by that night, she could barely walk. She went to the emergency room, where a doctor gave her a knee immobilizer and crutches. Her supervisors said she had to report her injury in person, so the next day she hobbled down from her second-story apartment and drove to work, where she was asked to see a company-approved doctor via video, who had her self-examine by touching her knee.

“I’m too young to have a knee injury, but it still bothers me,” she said. “It’s not just me; a lot of co-workers have blown out their backs while scanning or have to tape their shoulders every day so they won’t pop out.”

She is counting on AB701 to improve conditions.

“I hope it takes into consideration how fast we can move as people and not as robots,” she said. “For me, working as fast as I was led to safety shortcuts, not even prioritizing my own health and safety. I hope that me and my co-workers across California don’t have to choose between their safety and their rate.”