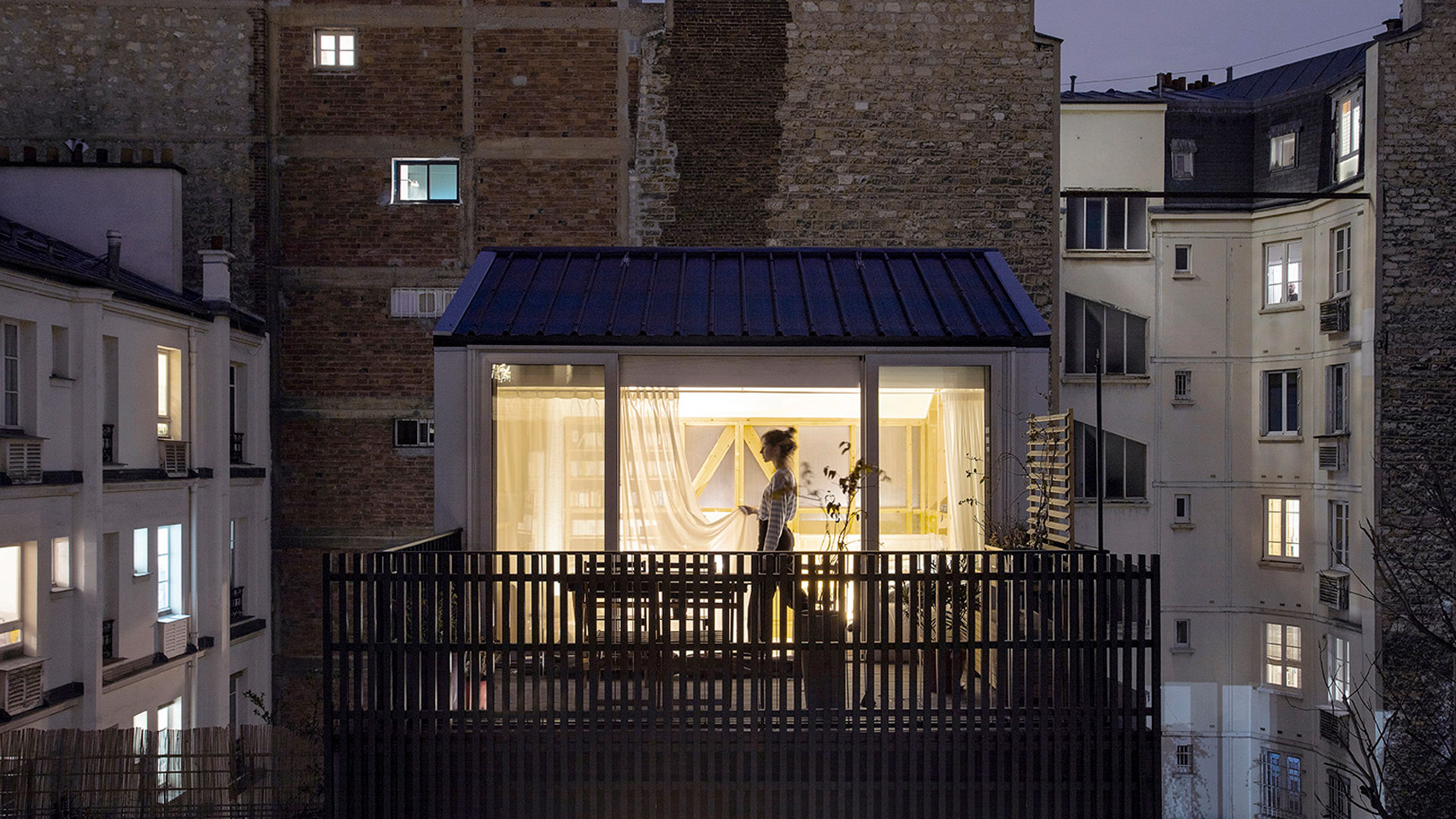 Continuing our review of the year we look at the house extensions that turned heads in 2021, including a polycarbonate-clad tower and a mirrored art gallery on stilts.

In its renovation of an abandoned Georgian house in London, Turner Architects added a large rear extension that incorporates a pair of courtyards and a green roof.

The project, which was informed by monastic cloisters, contains a sequence of living spaces that leads out into the back garden. The courtyards are accessed through sliding doors, creating seamless links between the inside and outside when opened.

Find out more about A Cloistered House ›

Java Architecture introduced this six-by-four-metre tower to an old stone dwelling that was found hidden away in a courtyard in Paris.

The vertical extension contains three storeys of living spaces and is animated with a mix of different facade treatments, including slatted wood screens and translucent polycarbonate panels.

Find out more about Staying in Paris ›

One of the most experimental extensions on this list belongs to the House Recast, a Victorian home in London that was renovated by Studio Ben Allen for a retired couple.

The project, which won the Don’t Move, Improve! 2021 contest, uses brightly coloured concrete for both its structural elements and decorative details. The architect said this was informed by the home’s original Victorian architecture.

Find out more about House Recast ›

Cottage on the Point, Canada, by Paul Bernier Architecte

This screened porch and stained cedar-clad volume were added to a rustic lakeside cabin in Quebec as part of a wider renovation project.

Paul Bernier Architecte designed the extensions to echo the rustic look of the existing dwelling without blending in with it. Both new additions also incorporate large portions of glazing that frame views of the surrounding trees and night skies.

Find out more about Cottage on the Point ›

In east London, a Victorian semi-detached house was extended by DGN Studio to transform its dark north-facing kitchen into a bright and open room suited to gatherings.

The extension stands on a sunken concrete floor that is left exposed and designed to maximise ceiling height. It is complemented by navy kitchen units with concrete worktops and brightened by an exposed roof structure made from oak.

House for Theo and Oskar, UK, by Tigg + Coll Architects

Accessibility was a priority in the design of this house extension, which Tigg + Coll Architects carried out for a family with two children that have a rare muscular disorder.

The timber-roofed wing is accessible by wheelchair and contains facilities designed specifically for the children, Theo and Oskar, after whom the house is named. Its distinctive diagrid roof was engineered to help create spacious bedrooms and to also support hoists.

Find out more about House for Theo and Oskar ›

Balanced over steep bedrock in the Okanagan Valley, this mirrored house extension by F2A Architecture is used by its owner as a private art gallery.

Due to the uneven terrain of the rocky site, the extension is elevated on slim steel stilts and accessed via a glazed stairwell in the main house. Its stainless steel cladding was chosen to reflect the sky and the building’s wooded surroundings.

Find out more about Malinka Gallery ›

Moxon Architects excavated the basement of a Victorian townhouse in London to create this pared-back rear extension and matching sunken garden.

The addition, which contains a spacious living area, occupies the full width of the plot and is finished with a crisp white material palette. The concrete brick walls and resin flooring extend outside to offer a seamless transition to the garden.

Find out more about Rydon Street ›

House B-L is a 1960s home in Destelbergen that was expanded with a minimalist kitchen and living area by Graux & Baeyens Architecten for its co-founder Basile Graux.

The new wing is positioned at a slight angle to the original dwelling to maximise sunlight exposure. However, the old and new elements are unified by muted interior finishes and the same grey plywood cladding on their exteriors.

Find out more about House B-L ›

A tactile material palette of exposed timber and blockwork characterises the semi-enclosed rear addition to K&T’s Place, a cottage owned by an artist and gallery director in Brisbane.

It was extended by Australian studio Nielsen Jenkins as part of a wider renovation of the dwelling and contains a series of occupiable landings that maximise space in the existing home. By exposing its construction materials, costs were also kept to a minimum.

Find out more about K&T’s Place ›