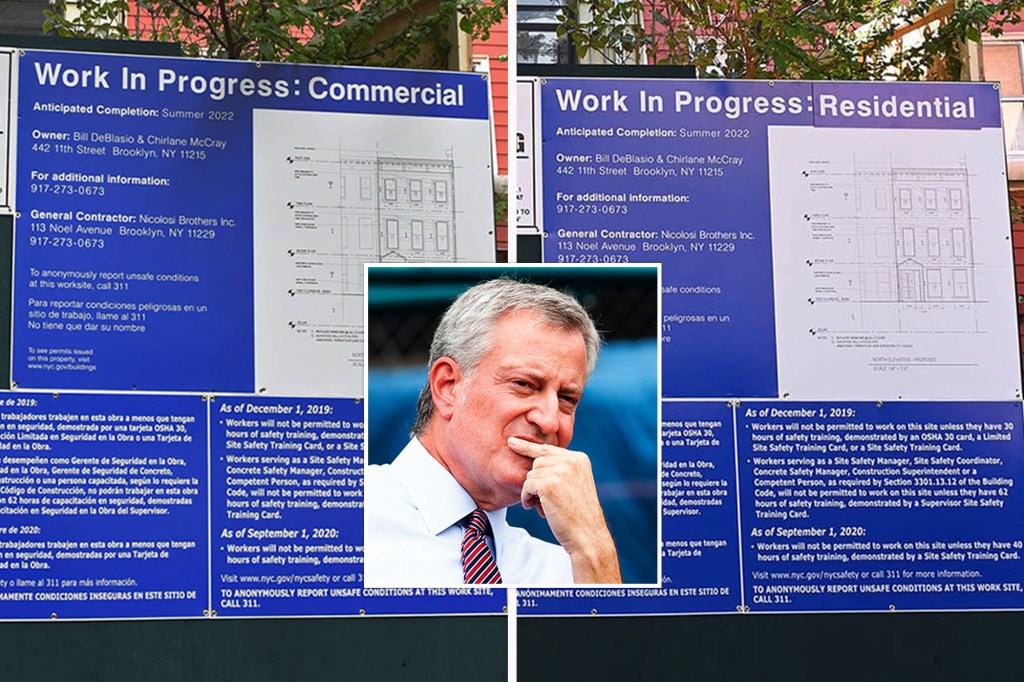 Mayor Bill de Blasio might want to get his house in order.

The renovation project at Hizzoner’s Park Slope rowhouse, which began in early October, has already racked up five complaints to the city Department of Buildings.

The first anonymous complaint on Oct. 9 said the construction work, which will include additions to the rear of the home, was beyond what had been approved in plans. An inspection done Thursday found no violation, records show.

On Oct. 10, the DOB received another complaint about illegal after-hours work. Inspectors went to the 11th Street home the next day and saw no work that would warrant a violation, DOB records show.

An Oct. 12 complaint contended that a stop work order on the property had been tampered with or removed. The DOB said that there was no such order there.

Someone lodged another gripe on Oct. 17 saying electric and plumbing work was being done without a permit. And on Oct. 27, the DOB received a similar complaint that work was in progress without a permit, but the agency deemed it duplicative.

A DOB spokesman said the agency would be responding to the complaint with an inspection.

Green construction fencing that went up around the home in October curiously listed the project as commercial. The sign said the home’s owners were de Blasio and his wife, Chirlane McCray.

The sign was then replaced by one that correctly said it was a residential project, but de Blasio’s name was dropped as home owner leaving only McCray. Public records show they both continue to own the property.

“The sign guy screwed up and then he redid it and forgot one of the names,” said Robert Ferrarin, with Nicolosi Brothers Inc., the general contractor on the project who added only one owner’s name was necessary.

Ferrarin said all rules were being followed for the project and that plumbing and electrical work had not started yet.

He said the renovation could be finished in January or February, although the sign says summer 2022. De Blasio is living in Gracie Mansion until his term ends on Dec. 31.

De Blasio and McCray took out a $615,342 loan against the residence in June, which a City Hall spokeswoman said was to fund the renovation. They already had a $625,000 mortgage on the house, which is more than a century old.

A City Hall spokeswoman said “the DOB inspected the property this week and found zero violations.”