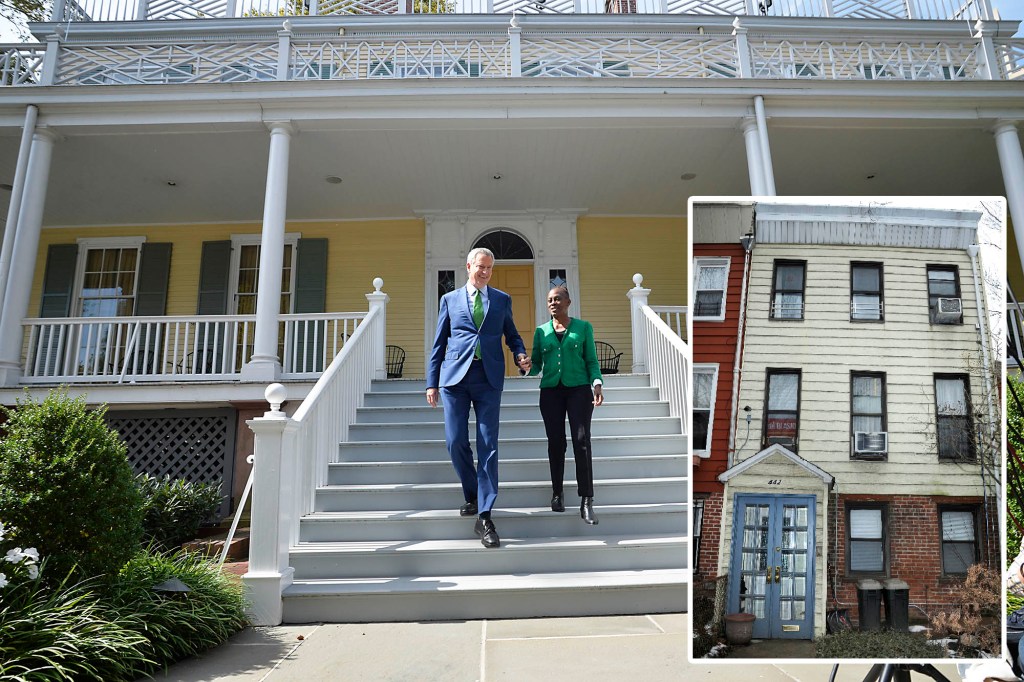 Under withering questioning from reporters Wednesday, Mayor Bill de Blasio was forced to defend going deeper into debt to renovate his Brooklyn homes while failing to pay the hundreds of thousands of dollars he still owes a law firm that reps companies doing business with the city.

The mayor summed up why he thinks the potential conflict of interest is OK in six words: “I need a place to live.”

The lame-duck mayor, who will need to move out of Gracie Mansion by the start of 2022, claimed the Brooklyn house requires upgrades before he and his family move back, when asked by The Post Wednesday morning how he justifies spending on his Park Slope home while already being on the hook for at least $300,000 in legal fees.

“It’s an old house, it’s over 100 years old. It needed a lot of work before we can move back in,” he said during a virtual press briefing.

“I need a place to live. It’s very simple. This is my house. This is where I live,” the mayor explained.

“When we moved in in the year 2000, it needed an immense amount of work, and we couldn’t afford it, and we finally got to a situation where we could refinance and afford to do some really basic renovation, and I need a place to live and my family needs a place to live.”

To fund the ongoing renovation project, which began in early October, de Blasio and his wife, Chirlane McCray, secured a $615,342 loan in June on their three-story home, records show. The couple had previously borrowed $625,000 against the house, worth about $1.5 million.

That came after the couple received a $543,425 mortgage consolidation agreement in May for the other home they own on the same black, valued at $1.65 million.

The new debt comes on top of the $300,000 that de Blasio owes to one of the city’s top legal and lobby firms, Kramer Levin & Naftalis, which may have grown to as much as $435,000 with interest, according to one report.

The mayor hired the white shoe firm to represent and defend him during multiple probes into his fund-raising practices between 2015 and 2017.

Kramer Levin represents clients with major business before the city, including the Blood Center on the Upper East Side, which is in a grueling fight with the local lawmaker, Councilman Ben Kallos (D-Manhattan) to build a controversial new 16-story tower there.

(One of the project’s leading opponents is Mark Epstein, the brother of now-dead pedophile Jeffery Epstein, who owns a substantial part of a nearby building where his disgraced brother once stashed his victims, according to court papers.)

De Blasio has yet to make any payments towards the debt, despite pressuring the City Council to approve legislation in 2019 that would allow him to raise money from donors towards the costs.

Hizzoner hasn’t even set up the legal defense fund yet.

Asked during Wednesday morning’s news conference about the money he owes Kramer Levin, de Blasio maintained that he “intend[s] to pay” it via raising money, noting that he does not possess as much personal wealth as billionaire ex-Mayor Michael Bloomberg.

“It’s a debt I intend to pay,” he promised. “I do not have a lot of extra resources kicking around, I’m not like my predecessor, so I would have to raise the money. I will over time and I will pay it off.”

De Blasio earns a $258,000 salary as mayor, plus free rent at Gracie Mansion. He’s also made hundreds-of-thousands in rent off of his two Park Slope properties during his two terms running the Big Apple.

A potential candidate for governor, the mayor is appealing a ruling from the Conflicts of Interest Board that required him to pay for his NYPD security detail to accompany him on his ill-fated presidential bid in 2019.

A damning Department of Investigation concluded he owes taxpayers $320,000 for that expense.