Coyote Valley in center of development vs. preservation battle 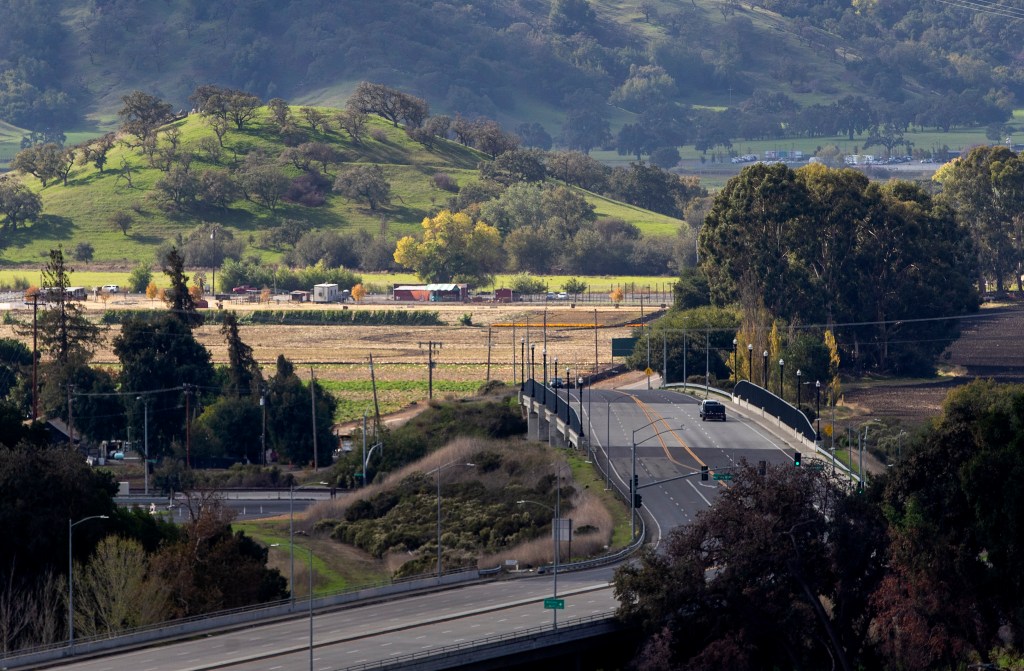 With its desirable scenic landscape on the southern edge of San Jose, Coyote Valley has found itself yet again at the center of a pitched debate over preserving the vast open space or making way for a potential industrial park.

San Jose leaders on Tuesday will weigh a series of decisions set to shape the valley’s future. One of the key issues at stake is whether to protect 314 acres of remaining developable land in North Coyote as agricultural land or maintain decades-old plans to transform it into an employment center where massive “Amazon-style” warehouses and distribution centers with up to 5,500 workers could be built.

“The vote of the council next week will put the period at the end of the sentence for the massive public investment that’s gone into conserving Coyote Valley over the last two years,” said Andrea Mackenzie, general manager for the Santa Clara Valley Open Space Authority.

If San Jose decides to continue its recent efforts to preserve the landscape, it’s likely to set off a legal battle between the city and a group of property owners who are already under contract to sell off their farmland to be developed into warehouses.

Under a preliminary plan submitted to the city, Texas-based real estate developer Crow Holdings Industrial is proposing two warehouses, both spanning the length of more than six football fields, at 8820 Santa Teresa Boulevard. The project would replace 126 acres of mostly vacant farmland, as well as Spina Farms Pumpkin Patch and fruit stand — a beloved South Bay destination for families, cyclists and locals.

Attorneys representing the property owners who own the farmland that Crow is slated to purchase argue that the proposed rezoning of the land would be unconstitutional because it would leave the landowners with no “economically beneficial or productive use” of their properties. They submitted a report to the city declaring that agriculture was not an economically viable use of the land, though some city and county officials and environmental groups disagree.

“The council certainly has the power to implement a vision for open space in Coyote Valley, but what they can’t do is use their zoning power to jam it down the property owners in a way that makes them sell their land for below market value,” said former San Jose Mayor Chuck Reed, who is one of the attorneys representing the property owners. “If you really want to protect the open space, you need to do more than pass a resolution. You need to buy the land or the development rights.”

Reed is urging city officials to come up with a plan to purchase the 314 acres of remaining developable land in North Coyote Valley that is subject to the proposed zoning change before making the policy shift. In a 5-4 vote last month, the city’s Planning Commission expressed concerns about decreasing the property values without fairly compensating the landowners and voted against the rezoning.

Development battles have raged over Coyote Valley for more than six decades. At one point, the city had plans for more than 50,000 new jobs and up to 25,000 homes in the valley — double the number of jobs now planned for Google’s transit village in downtown San Jose and more than five times the housing units.

In the 80s and 90s, both Apple and Cisco Systems expressed interest in building campuses there, but both were fought off by environmental groups who argued that the valley, which is inhabited mainly by farmers and wildlife, should remain primarily open space and agricultural land.

Advocates of preserving Coyote Valley’s undeveloped land note its role in reducing flood risks in San Jose, safeguarding water quality and wildlife, supporting small farmers and boosting recreational opportunities for the community. Coyote Valley, which encompasses a total of 7,400 acres, naturally functions to allow stormwater to fan out over the valley floor and seep into the groundwater table below instead of rushing down Coyote Creek and inundating neighborhoods downtown, as it did in major flooding in 2017. The Coyote Valley is also the last remaining open valley floor in the Bay Area for wildlife to migrate between the Santa Cruz Mountains and the Diablo Range.

Over time, city leadership, including Mayor Sam Liccardo, has sided with environmental groups and shifted their priorities from expanding sprawl and building up Coyote Valley to focusing development in existing urban centers and around public transit — a move shaped by market trends and new city climate goals like reaching net-zero greenhouse gas emissions by 2030.

“The city cannot become carbon neutral by 2030 by paving over its open lands. This is what we need to be focused on, not the construction of yet another warehouse that could be constructed in any other location in the already developed city of San Jose,” Mackenzie said, calling the prospect of an “Amazon-style” warehouse “unfathomable.”

Despite the numerous investors who scooped up land in Coyote Valley over the past decades expecting it to become a mecca of tech campuses and subdivisions that would help them turn a handsome profit, an uptick in preservation deals seems to indicate the valley’s future is headed the opposite way.

In November 2019, the city partnered with the Peninsula Open Space Trust, an environmental group based in Palo Alto, and Santa Clara Valley Open Space Authority to spend $96 million to acquire 937 acres in North Coyote Valley from developers Brandenburg Properties and the Sobrato Organization. That monumental deal was followed by the $18 million purchase of Tilton Ranch — a 1,861-acre expanse in South Coyote Valley — in October 2020 by a coalition of government agencies and environmental groups.

Liccardo said in an interview that now was “not the time to hedge or go backward” on the city’s commitment to protecting the area from development. He called the Planning Commission’s vote last month “a bad decision,” adding that the city’s vision for Coyote Valley “doesn’t include Amazon.”

“We routinely make zoning decisions that affect property values,” he said. “The question is, what is the best decision for the community.”

Alabama Amazon warehouse gets another chance to vote on unionizing : NPR

5 Home Improvements That May Not Pay Off