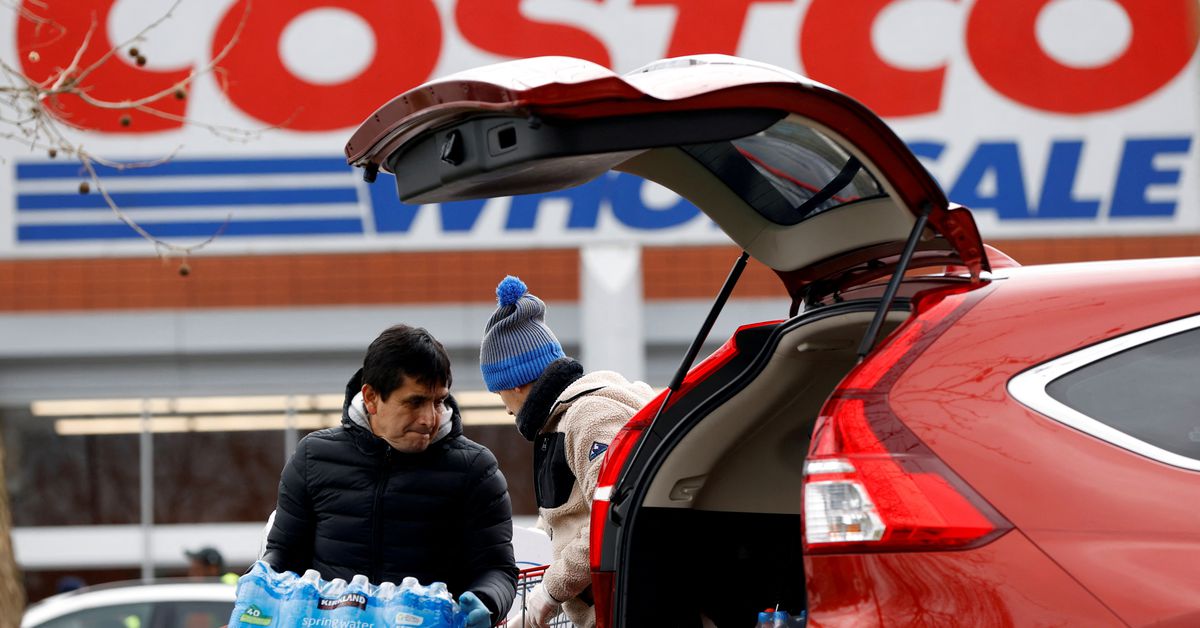 A shopper loads a car with bottled water at a Costco Wholesalers in Chingford, Britain March 15, 2020. REUTERS/John Sibley

May 25 (Reuters) – Costco Wholesale Corp (COST.O) is expected to post a rise in quarterly earnings on Thursday as the spending power of Americans with store memberships remains largely intact even as surging inflation dents profits of major U.S. retailers.

Costco, however, lies in a sweet spot, as an average shopper at its warehouses makes much more in a year than a typical Walmart and Target customer, and the warehouse club operator’s efforts to keep gas prices several cents below the national average also drives memberships.

Membership fee income accounts for a bulk of Costco’s profits.

“The American consumer will go out of their way to save money on gas,” D.A. Davidson analyst Michael Baker told Reuters. “The gas business drives traffic to the parking lot, and then somewhere between 30% and 50% of those customers end up going into the club and buying something.”

Analysts will also be keeping an eye on the impact of China’s COVID-19 lockdowns on Costco’s supply chain. The warehouse club chain sells many products made in China, including iPhones, clothing and certain products for its private-label brand Kirkland Signature.

Costco’s smaller rival BJ’s Wholesale Club Holdings Inc (BJ.N) last week reported a quarterly profit above estimates, as higher-income customers shopped more and made up for a slowdown in spending from others.

“The benefit at the higher income cohorts is frankly a little better than what we expected,” BJ’s Wholesale Club Chief Executive Bob Eddy said on an earnings call.

* Analysts polled by Refinitiv, on average, expect Costco to earn $3.04 per share for the third quarter, an increase of over 10% from a year earlier.

* Costco reported same-store sales growth, excluding the impacts from changes in gasoline prices and foreign exchange, of 12.2% and 8.7% for March and April, respectively. The chain’s third quarter typically ends in early May.

* The current average rating among 37 analysts is “buy”, with none of them having a “sell” rating on Costco’s shares.

Reporting by Praveen Paramasivam and Ananya Mariam Rajesh in Bengaluru and Siddharth Cavale in New York; Editing by Shounak Dasgupta