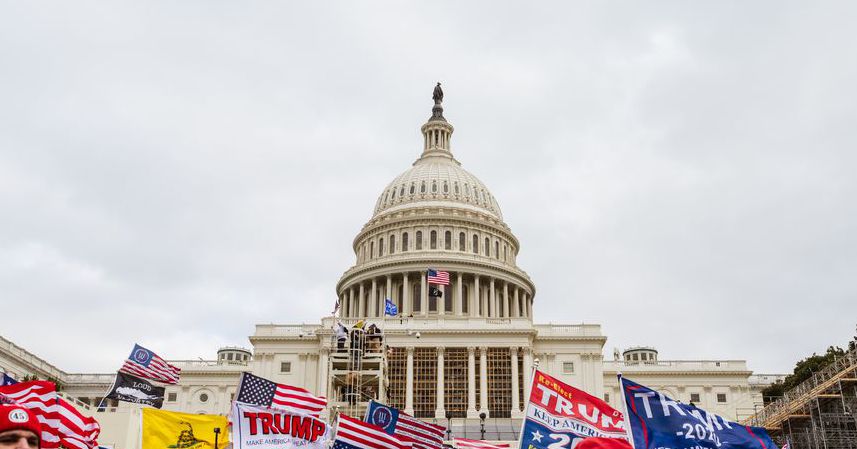 A Chicago real estate agent who lost her job with @properties because of her ties to the U.S. Capitol breach in January is suing over an MSNBC report in which she claims the network wrongly told viewers she had been criminally charged, court records show.

The Jan. 6 Capitol riot interrupted the Electoral College vote count in Congress and has led to criminal charges in federal court against hundreds of people, including at least six Illinoisans. Libby McCarten Andrews is not among them, according to court records.

Still, the real estate group @properties announced on Jan. 7 that Andrews had been fired, saying it received “a tremendous amount of outreach” following social media posts in which Andrews appeared to acknowledge being in Washington, D.C., for the event.

Andrews allegedly posted a photo of herself standing on the Capitol steps with supporters of then-President Donald Trump along with the caption, “History! It’s not done yet!” In another post, she allegedly wrote, “After storming the capital a good glass of champagne is needed!”

Now, in a lawsuit filed in federal court in Chicago against NBC Universal Media LLC, Andrews alleges that her name and photograph wrongly appeared in a graphic broadcast Jan. 10 on “Weekends with Alex Witt” that was titled, “Charged In Connection With Riot.”

An NBCUniversal representative could not immediately be reached for comment. Nor could a lawyer for Andrews.

In the complaint, Andrews’ lawyers wrote that she left Chicago the morning of Jan. 6, flew to Washington and arrived in the early afternoon. By 1:30 p.m., she was part of a crowd present on the east side of the Capitol, it said.

They also insist in the complaint that Andrews did not instigate any confrontation, enter the Capitol, participate in any damage or destruction, threaten anyone or trespass on public property. It said she left the Capitol around 3:15 p.m. and walked to a hotel where she had made reservations that evening.

The lawsuit claims that, prior to the Jan. 10 broadcast of “Weekends with Alex Witt,” Andrews “had no notoriety of any kind in the community at large,” though her name appeared in multiple news reports after @properties announced her firing Jan. 7.

Andrews’ lawyers wrote that NBCUniversal published “its false and defamatory accusations against [Andrews] in order to advance its own political agenda that anyone present outside the Capitol on January 6, 2021 was there to engage in violence and cause criminal damage.”