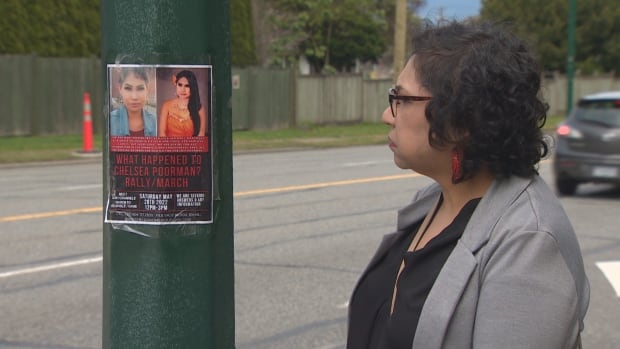 As Chelsea Poorman’s family continue to search for answers around what happened to their daughter, advocates for missing and murdered Indigenous women and other supporters say they are ‘disgusted’ to see that some of the posters acknowledging her disappearance have been torn down over the weekend.

“It was very upsetting and it was just uncalled for,” said Chelsea’s mother, Sheila Poorman.

For the past year and a half, Sheila Poorman and her two other daughters have been putting up missing person posters across the city after 24-year old Chelsea was reported missing in September 2020.

Chelsea’s mostly skeletal remains were discovered in April 2022, on the back patio of an unoccupied home near Granville Street and West 36th Avenue in the Shaughnessy neighborhood.

After a vigil on Saturday, a volunteer captured a video of Randy Vogel, a real estate agent in Vancouver, taking down posters for a rally raising awareness around her disappearance and death in the area of Granville Street and West 33rd Avenue.

“I had to take out my phone with how many signs he was dropping down,” Lavita Trimble told CBC News.

Randy Vogel, a real estate agent in Vancouver, is seen taking down missing person posters of Chelsea Poorman on May 28 in the area of Granville Street and West 33rd Avenue, close to where her body was found in April.

“I ran half a block to get a better picture and record him. I asked him, ‘Why does this bother you?’ and his response was, ‘It’s vandalism.”

Trimble, a counsellor at the Battered Women’s Support Services (BWSS), said she was immediately disappointed by his response and didn’t understand Vogel’s actions.

“It’s not vandalism. It’s awareness for the family that needs help. We need to watch out for one another. It’s not just Indigenous women that are being targeted, it’s the vulnerable,” she said.

Volunteers at the vigil said they also saw another woman taking down posters on Saturday.

“She was saying it was ruining the poles [and] that she pays taxes for the poles,” Saz Lambert told CBC News.

“It makes me feel really disappointed in the community here.”

Lorelei Williams, founder of Butterflies in Spirit — a dance group comprised of family members of missing and murdered Indigenous women and girls — says actions like this put Indigenous communities are risk.

“Predators know when they can target us because they can get away with it. They are getting away with it right now,” said Williams.

“It’s disgusting that these are the kind of people we face on a daily basis. They are the reasons our women go missing and murdered at a high rate.”

She said Chelsea’s death has raised questions over how police have handled the case, and that the missing person posters are part of efforts to find answers and justice for what happened to her.

Vogel’s employer, Macdonald Realty, said they took immediate action and that Vogel is no longer with the company.

“As an organization, we are in full support of Chelsea Poorman’s family and friends, as they search for answers and justice,” said Dan Scarrow, president of Macdonald Realty.

“We do not condone any inappropriate actions taken by any member of our community, and in this instance, we took immediate action and they are no longer with Macdonald Realty.”