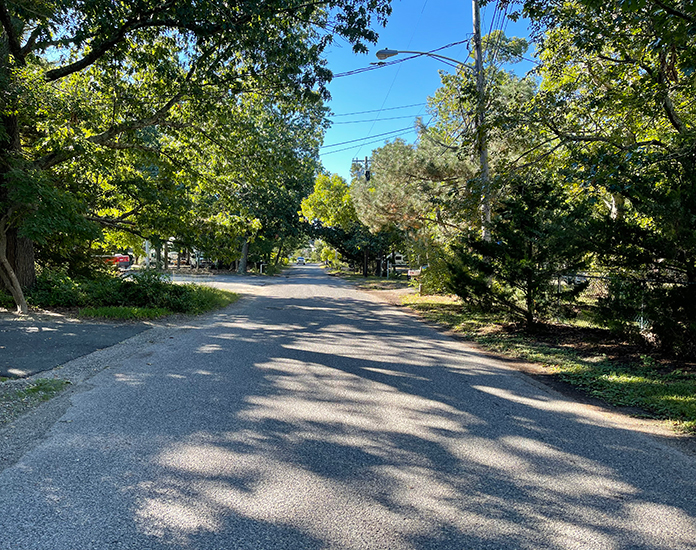 BRICK – A scaled-down version for the development of a vacant parcel at the intersection of Drum Point Road and Old Silverton Road, which was previously rejected by the Planning Board, was given a green light during a recent hearing.

The L-shaped 28,000 square foot lot, located behind the Red Lion Plaza, has 100 feet of frontage on Drum Point Road, one of three roads in Brick that are in the Village Zone.

The Village Zone, established by ordinance in 2018, encourages mixed use development by combining commercial and residential use, and protects the township from high-density residential development while providing a means to improve businesses. (The other two Village Zones roads are Herbertsville Road and Mantoloking Road).

Samuel Pica’s approved application for the complex – to be named “Anna Michelle Contractor Storage” – is for two structures: a 5,000 square foot contractor’s “pole barn” warehouse and equipment storage, located in the rear of the site; and a two-story building with a 2,500 square-foot footprint building, which would contain an office and two, three-bedroom apartments.

The previous application called for five contractor offices and storage units, which was unanimously rejected by the board, mostly because there was not enough parking in the plan.

“It’s anticipated that the office and the contractor building will be accessories to each other, so the operation will run from the office, and the pole barn will be used specifically for vehicle storage in the evening, equipment storage, any surplus material they’ve accumulated as part of the business, and occasionally a little bit of minor fabrication, which is consistent with the type of business that Mr. Pica is involved with,” said attorney Tim Middleton, who was representing the developer.

Project engineer David G. Eareckson said that there would be no driveway onto Drum Point Road, which is a county road, since county officials said it would be too close to the Hooper Avenue intersection.

He said the only safe place for a driveway is on Old Silverton Road, which is all residential. Eareckson said the site would be of little impact to neighbors, but a number of Old Silverton Road residents disagreed. About a half-dozen of them attended the meeting and expressed (mostly) traffic concerns during the public comment portion of the meeting.

“It’s not as bad as what was originally proposed, but it’s basically industrial storage,” said Andrew Flora, one of several residents who spoke. “What will go in these buildings? We have no control over it. What are the hours of operation? Who will occupy it in the future? There have been no traffic studies done to my knowledge.”

Old Silverton Road is used as a cut-through for drivers who want to avoid the Drum Point Road/Hooper Avenue intersection, he said, and now with the added commercial vehicles – which must use the only driveway fronting Silverton Road – there would be safety issues for the residents.

“It’s a fine plan for somewhere else,” Flora said.

The applicant agreed to a right-only exit for vehicles leaving the site, which would put them onto Drum Point Road, avoiding more potential traffic on Old Silverton Road.

Planning Board members voted unanimously in favor of the revised plan.