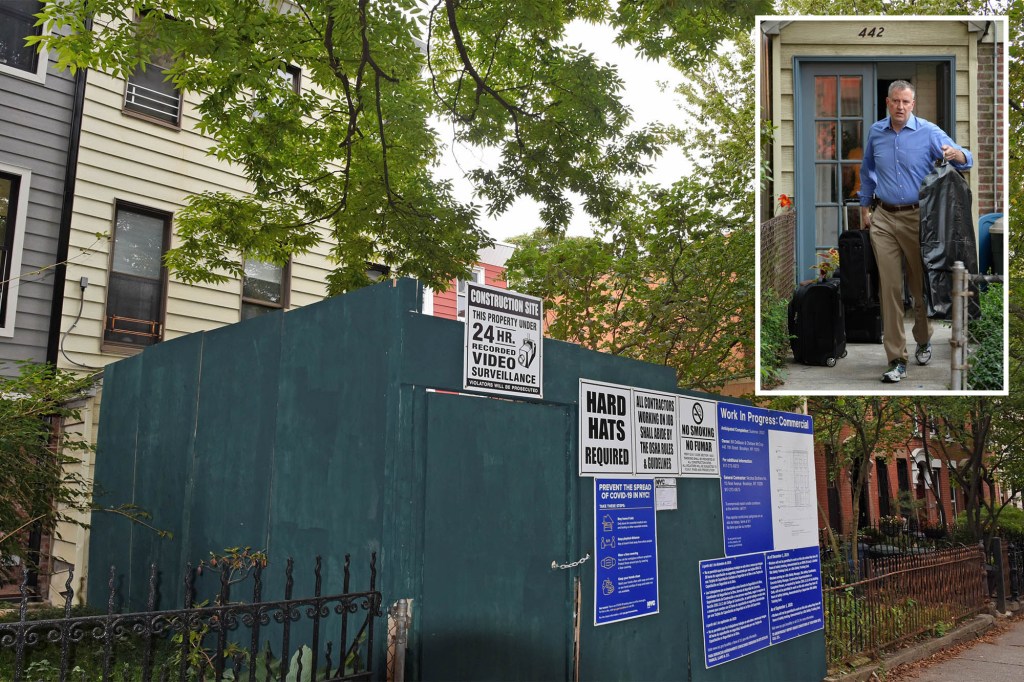 They’re back to keeping up with the Joneses.

Mayor de Blasio and first lady Chirlane McCray — who must leave Gracie Mansion at year’s end and need a place to live — are doing massive renovations to their century-old, three-story Park Slope home.

Temporary green construction fencing has been placed around the property with a large blue and white sign erected on it that says “Work in Progress: Commercial. Owner: Bill de Blasio & Chirlane McCray.”

There is also a sign noting there is 24-hour video surveillance.

The architectural plan included in the city building permit for the renovations calls for a substantial addition to the first and second floors toward the rear of the century-old building.

But the entire house is also getting a face-lift, said a subcontractor working on the job.

Robert Ferrarin said builders are sprucing up the interior-exterior of the house with a paint job, new floor molding and new exterior windows and siding.

“We’re sprucing up the place. We’re making it look pretty,” he said.

“The place needs to be cleaned up. We just got on the job. We just started,” he added.

Ferrarin said he’s working with McCray, who is overseeing the project.

Hizzoner had rented the property while residing in Gracie Mansion, but no one is living there now during the renovations.

The mayor and McCray jointly own another nearly 120-year-old rowhouse at 384 11th Street.

De Blasio, through the mayor’s press office, declined comment on the renovations and his future plans.

The mayor has been criticized for spending too much time in his old neighborhood instead of doing his job, particularly because of his frequent trips to the Park Slope YMCA.

He also likes taking strolls in Prospect Park, which he did as New Yorkers struggled with the coronavirus pandemic.