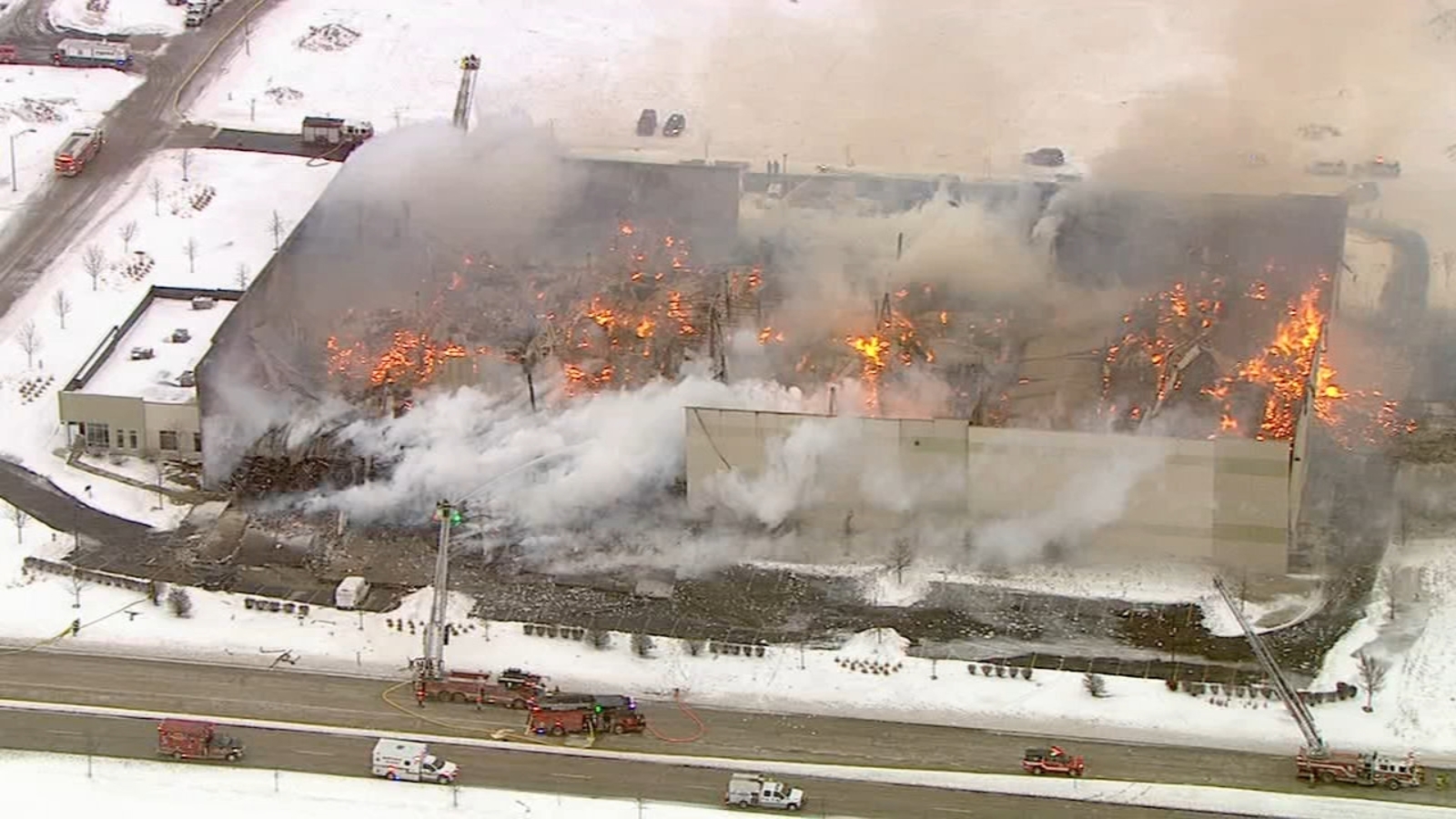 Officials said the warehouse was stacked floor to ceiling with boxes of documents, providing ample fuel for the fire. What workers said began as a few boxes on fire grew into an inferno.

“These walls are collapsing on us,” Bartlett Fire Chief William Gabrenya said Friday. “We don’t want to get any of the firefighters within that collapse zone, so at this point, we’re all aerial operations.”

Gabrenya said firefighters have changed strategy to take the rest of the walls down in order to get inside the building, remove debris and put out the fire.

Still, he said, fighting the fire remains a slow process and the hope is that fire operations will be 100% complete by Monday or Tuesday. He said a construction company was moving obstacles so water can hit certain spots. Firefighters are using about 2,000 gallons per minute, he added.

Gabrenya said Friday morning that they anticipated the fire to be a multi-day event.

The smoke from the fire was so intense the plume was visible on ABC7’s Live Doppler 7 Max weather radar.

The building is a total loss and fire crews slowed down operations in order to focus on safety as they battled single-digit temperatures.

“Some of the pumps have been freezing, some of the waterlines have been frozen and we got a lot of ice on the ground so we had a couple firefighters slip and fall,” Gabrenya said. “So we’re trying to keep people warm so we’re rotating crews in and out to keep them warm.”

More crews were called in and the water being thrown on top has caused large areas of debris to freeze. Officials said they expect crews to be working through the weekend. A rotation of about 40 firefighters at a time will work through Monday as they try to put out the fire.

At one point so much water was being used fire officials say it started to drain the municipal water supply.

“We’re continuing to flow probably 3,000 gallons of water per minute to try to extinguish most of what’s still burning in there,” Gabrenya said.

The trouble began around 10 a.m. Thursday. Officials said a sprinkler system initially kept the fire in check, but when a series of steel racks being used to store boxes collapsed, there was no saving the warehouse.

In a statement, Access said all its employees evacuated the building and are safe. The company added that it is working with local authorities to determine the cause of the fire.

Access also said a recovery team is working onsite to “assess the situation, determine any impact, and take necessary actions.”

And while nearly 10 miles southwest of the fire a resident in Geneva sent ABC7 a photo of possible ash from the blaze he found in his yard, officials said the air is safe.

“It’s just paper products that are burning in there, so we’re not really concerned with air quality at this point,” Gabrenya said.

The cause of the fire is still undetermined. A spokesperson for Access said Friday, “We continue to work with local authorities and our onsite recovery team to assess the situation, determine any impact, and take necessary actions once it’s safe to do so. “