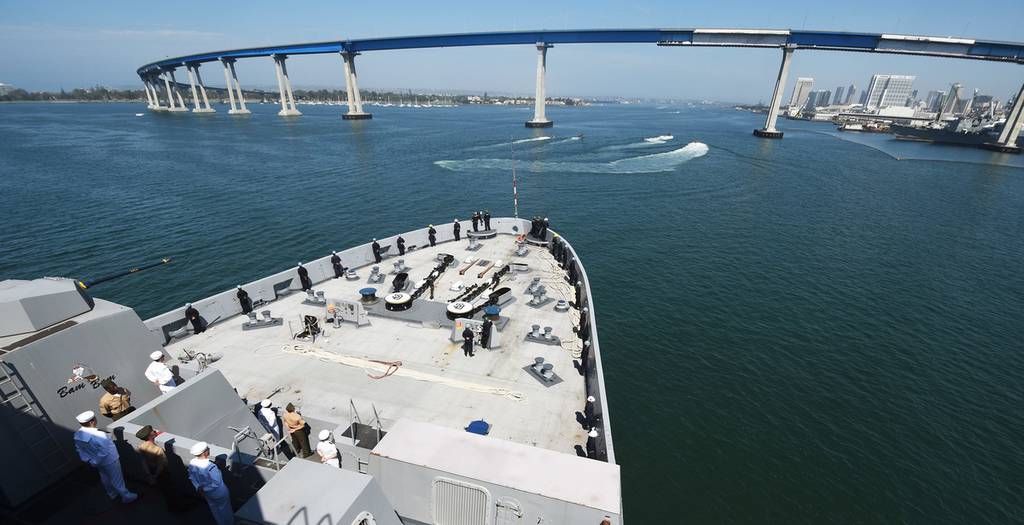 WASHINGTON — AT&T Inc. said it successfully demonstrated its 5G network at Naval Base Coronado in California as part of a Department of Defense effort to adopt the technology and create so-called smart warehouses.

Data transfer speeds of 3.9 gigabits per second, with less than 10 milliseconds of latency, were delivered during the April 28 showcase, according to AT&T, the largest U.S. telecommunications company by revenue. The private network powered experiments with virtual and augmented reality, high-definition video surveillance and artificial intelligence extended from the cloud.

“The AT&T 5G-powered solution we’ve delivered at Naval Base Coronado is a first of its kind, high-performance, highly secure, and scalable private network solution,” Lance Spencer, a client executive vice president for defense at AT&T, said in a statement. “We expect it will serve as the foundation for improved efficiency, timeliness, accuracy, security, and safety of naval warehouse operations.”

The announcement comes four months after AT&T claimed initial success in 5G testing for smart warehouses — with speeds greater than 4 gigabits per second — at a test bed in Richardson, Texas.

The Pentagon in October 2020 unveiled a $600 million investment in 5G experimentation across five U.S. military installations, representing the largest full-scale tests for dual-use applications in the world. Additional investments were made in 2021.

At Naval Base Coronado, the intent is to forge a 5G-powered smart warehouse that can improve the efficiency and fidelity of logistics from shore to ship. Another smart warehouse, focused on vehicle storage and maintenance, is sought at Marine Corps Logistics Base Albany in Georgia.

How the Pentagon is harnessing 5G for the future fight

The Defense Department’s 5G strategy is written with a sense of urgency: The nations “that master advanced communications technologies and ubiquitous connectivity will have a long-term economic and military advantage,” its unclassified, public pages read.

“This technology is critical to U.S. national and economic security,” said Capt. Timothy Brown, the commanding officer of Naval Supply Systems Command Fleet Logistics Center San Diego. “As one of the first sites funded to test this technology for the U.S. military, we will help map 5G development and DoD strategies moving into the future.”

“We in the Navy, you know, we work at the edge, have been working at the edge since the 1700s,” Galbraith said at the Cloudera Government Forum. “In that information domain, there are other network capabilities, and 5G just is, again, a great enabler.”

Colin Demarest is a reporter at C4ISRNET, where he covers military networks, cyber and IT. Colin previously covered the Department of Energy and its NNSA — namely Cold War cleanup and nuclear weapons development — for a daily newspaper in South Carolina. Colin is also an award-winning photographer.