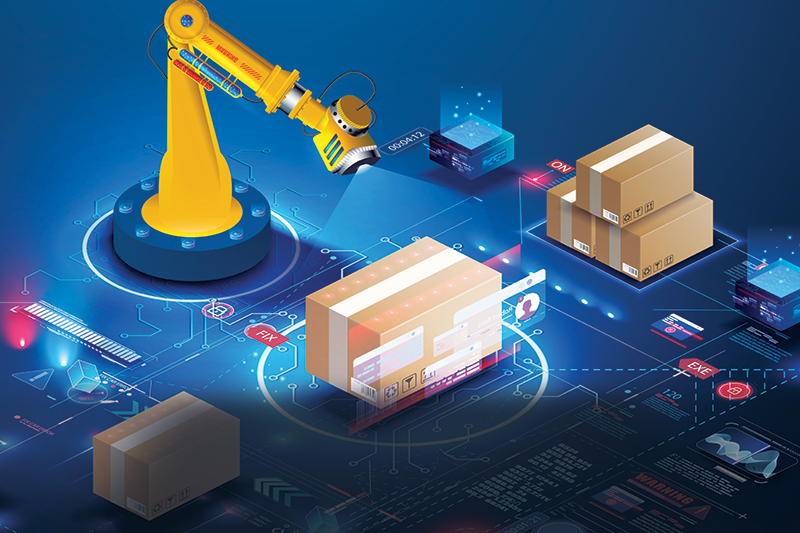 Upon first glance at some of the key findings from our annual “Warehouse Operations & Trends Survey,” industry participants are riding a pretty strong wave. Budgets are up, there are more respondents saying they’re “adding staff” as well as planning for more buildings and square footage.

But on closer look, our research team finds deep strains in the world of warehouse operations, led by pandemic repercussions like massive supply disruptions and a highly challenging labor market. These macro-trends run smack into operations at the warehouse and distribution center (DC) level, where managers need to find a way to accommodate growing e-commerce fulfillment volumes and control inventory as best possible in a time of supply shortages.

The survey, conducted annually by Peerless Research Group (PRG) on behalf of Logistics Management and sister publication Modern Materials Handling, asks about operational factors at DC and warehouses, such as size of the DC network, number of employees, average annual inventory turns, use of temporary labor, strategies for coping with peak demand, and other challenges such as finding and retaining labor. This year, the survey drew 144 qualified responses from professionals in logistics and warehouse operations across multiple verticals.

First, let’s start with some encouraging aspects of the survey because we’ve all heard about supply chain wide trends like microchip shortages.

The good is as follows:

However, we’re far from basking in normal growth mode because pandemic challenges remain with us. Inventory turns, which had been trending up in recent years, are down—likely tied to supply disruption and the decision to buffer more inventory as an enterprise strategy. Inability to find and retain labor, always a top challenge in our survey, grew even faster this year as the top concern.

There were also some unexpected findings, like more reliance on paper-based and manual processes; but on the whole, those involved with DC operations are planning to respond to disruption by applying more automation while fining-tuning their processes.

A greater readiness to adopt automation is part of the industry response to disruption, according to Norm Saenz, Jr., a partner and managing director with St. Onge, and Don Derewecki, a senior consultant with St. Onge, a supply chain engineering and consulting company and long-time partner with PRG on this survey project. Both of them examined the findings from our survey, and note the challenges are formidable, while the data point to more use of automation.

“Normal supply chain flows remain significantly disrupted, which of course impacts DC operations,” says Derewecki. “As for the labor availability issue, it was already a problem in recent years, and now it’s accelerating. All of these macro trends are getting company leaders more motivated to mechanize or automate more processes, because they know that can’t count on getting enough people into the building to run a largely manual operation.”

Before getting into facility and workforce findings, it’s notable that the march toward more e-commerce is once again reflected in the survey because we ask about channels serviced, including e-commerce, omni-channel, and for the second year running, micro-fulfillment. 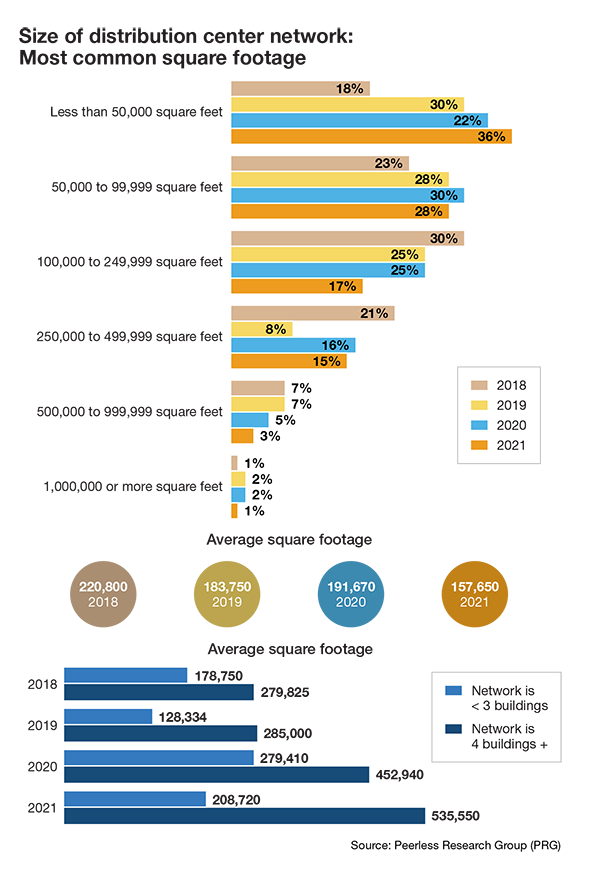 The shift to more complexity on the inbound side is something Saenz sees among clients, as more operations are dealing with an e-commerce surge.

“The concerns about e-commerce are real,” says Saenz. “It’s growing, and it’s just flipping the script for some companies whose facilities were designed around wholesale or retail-sized orders. Some companies have managed to sort of shoehorn-in e-commerce processes, but now it’s going to be driving everything from facility design to technology investment, just to be able to handle all of this e-commerce growth.”

When we asked about the most common square footage in the network, the overall average fell from 191,670 square feet last year to 157,650 this year. However, average square footage was on the upswing for those with four-plus DCs—from 452,940 square feet last year to 535,550 square feet this year. As Derewecki notes, it may be that rather than a definite trend toward smaller buildings for all, it appears to be a trend toward larger operations needing larger buildings, though some companies may be opening some smaller sites to get goods positioned closer to customers. 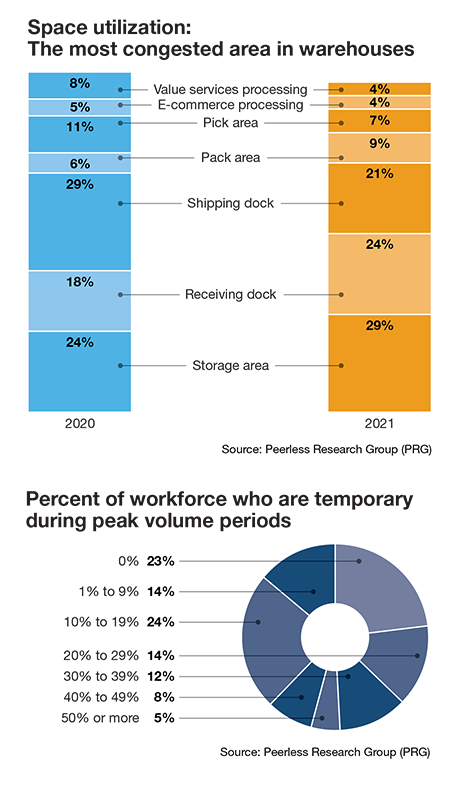 The tendency to hold inventories at higher levels to hedge against supply disruption is likely at play with the survey’s results on inventory turns.

This year, average annual turns came in at 7.0, down from 8.2 turns last year and as high as 8.9 turns back in 2018. “Due to these supply disruptions, which many feel will continue into 2022, we’re seeing a move away from just-in-time inventory strategies, to more of what you could call a ‘just-in-case’ approach,” says Derewecki.

Our finding on average SKU numbers fell a bit this year, after growing last year. This year, the average was 9,376 SKUs, down from 12,922 in 2020. Again, it’s a different set of respondents drawn from the reader base, but this decline does go against the notion of a “long tail” of inventory to accommodate the needs of e-commerce buyers.

One contributing factor, explains Saenz, is that ongoing supply disruption has caused many operations to refocus on a smaller number of SKUs representing their fastest movers. “It will be interesting over the next couple of years if a trend toward less SKUs is real, or a shorter-term trend that won’t stick once these supply chain disruptions have settled down,” he says. 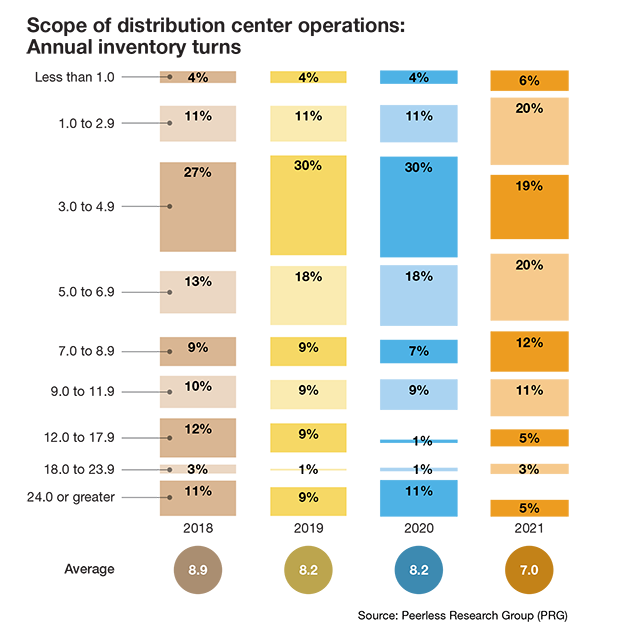 We asked again about health and safety measures at DC sites in light of the ongoing pandemic, and we found that measures like mask wearing and social distancing remain in widespread use in 2021.

Capex on the upswing

Perhaps the leading bright spot in this year’s survey are the findings around capital expenditures (capex) operations, as well as strong interest in materials handling systems and technology. Companies may be scrambling, but at least there’s budget to be applied to their challenges. 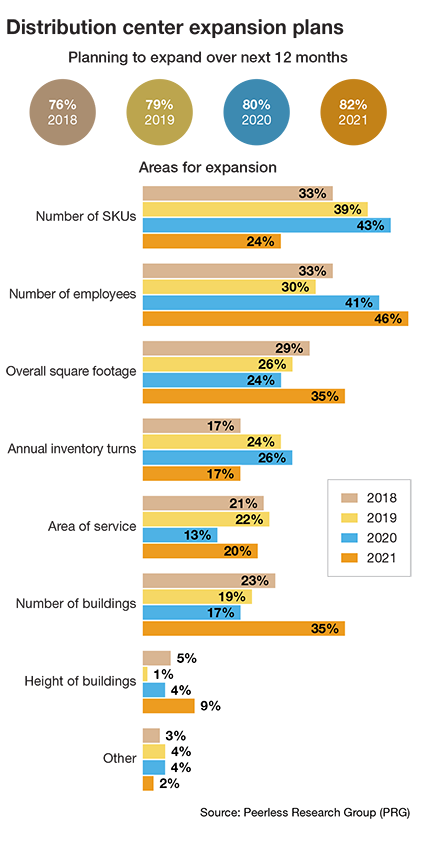 While one year’s findings on paper-based approaches is difficult to tie into one reason, other than a different set of respondents, it may be that the unusual supply shortages and rapid adjustments to warehouse workflows or SKU mixes experienced by operations during this second year of the pandemic may have contributed to more use of paper-based systems or data collection. 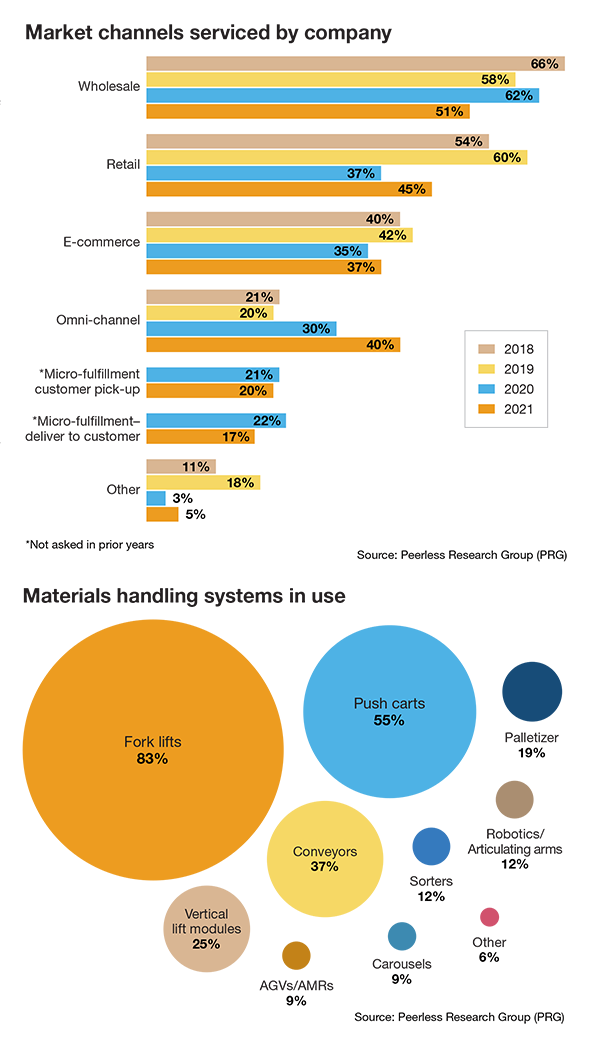 Overall, the 2021 survey shows that readers tend to have bigger capex budgets and a healthy interest in technology, but face big strains when it comes to finding and keeping labor, slower inventory turns, and more respondents with a space capacity issues during peak times.

More deployment of technology could be the answer, say Saenz and Derewecki, although there’s also typically some low hanging fruit with layouts or process improvements that could help those without growing budgets.

Saenz explains that the current pain points have led to some ironies, such as operations that keep temp workers on staff even when they don’t absolutely need them at the moment because getting more labor into the building when needed is no sure bet—so it’s seen as less risky to operational viability to keep them on.

In this climate, greater use of automation to help with reliable throughput and reduce reliance on manual processes is to be expected. Signs of faster-paced tech adoption is reflected in findings like the higher capex levels, adds Saenz, but he also sees it in interactions with clients.

As Saenz sums up: “There’s never been a time when so much automation and different warehouse technologies are being evaluated in every one of our projects—and in industries you wouldn’t think of as deploying technology heavily. In the past, people would talk about the potential benefits of more automation, but now more companies are considering it strongly. It all ties into the challenges around labor, and the growth in e-commerce.”